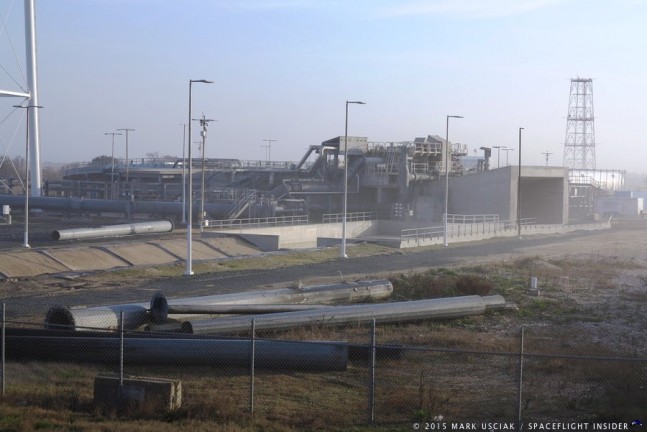 WALLOPS FLIGHT FACILITY, Va — Pad 0A at NASA’s Wallops Flight Facility in Virginia is starting to show signs of recovering over the explosion of an Orbital ATK Antares rocket attempting to carry out the third operational resupply mission (Orb-3) to the International Space Station in October of 2014. In terms of Pad 0A, located at the Mid-Atlantic Regional Spaceport (MARS ) in Virginia, the damage caused by the rocket’s explosion, while still evident, are fading.

Visually, the Antares launch site, looked in pretty good shape. The lightning towers sustained major damage and are being replaced before the next flight, currently scheduled for March of 2016. The large water tower at the site, also had some minor scorching discoloration, but is structurally sound and survived in relatively good shape. However, the vehicle erector/strong back sustained quite a bit of damage but is easily being repaired. The main fueling tanks and infrastructure also survived in fairly good condition. Repairs are well underway.

The main items that can’t be seen visually are the environmental impact studies and monitoring of the coastal and pad area for residual fuel spillage and seepage. Lots of liquid fuel, RP-1, was dumped on that area and what did not burn in the initial fireball is being closely monitored and cleaned up. The first and second stages of the next Antares rocket, scheduled for the Orb-4 mission, are undergoing assembly and checkout in the HIF (Horizontal Integration Facility) at this time. At present, the engineers who assemble the booster are awaiting the delivery of the new RD-181 engine set for the next launch and will be conducting a flight readiness firing prior to next springs launch.

Orbital ATK was already in the process of moving away from using the 40-year-old AJ26 (the re-branded NK-33 Russian engine) rocket engine, produced by Aerojet Rocketdyne, before an issue with the AJ26’s turbopump caused the complete loss of the launch vehicle and its cargo. The engine had experienced at least two accidents while being tested at NASA’s Stennis Space Center in Mississippi prior to the accident. Orbital ATK has pressed on, selecting United Launch Alliance’s (ULA ) Atlas V 401 to send another Cygnus spacecraft to the International Space Station with enough cargo to maintain the company’s requirements under the $1.9 billion Commercial Resupply Services contract the Orbital ATK has with the space agency.