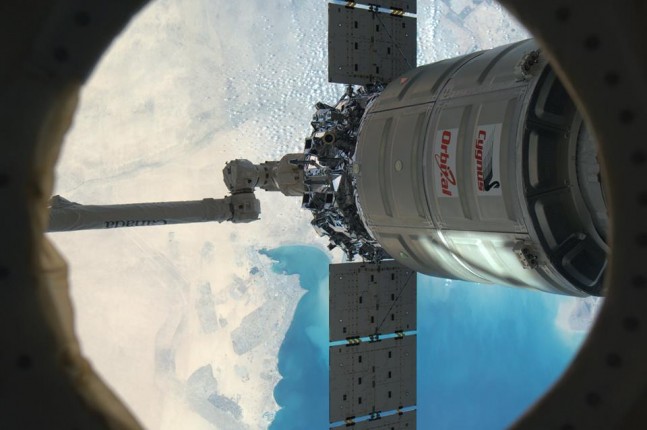 The Expedition 38 crew on board the International Space Station (ISS) said their farewells to a fellow traveler today. The Orbital Sciences Corporation’s Cygnus spacecraft (dubbed the C. Gordon Fullerton in honor of a recently-deceased astronaut) was unberthed from the space station today, Tuesday, Feb. 18 at 6:41 a.m. EST (1141 GMT).

This marks the second Cygnus spacecraft to travel into the black of space to the orbiting laboratory. The soda-can shaped spacecraft spent some 37 days attached to the ISS. During its stay on the ISS, 2,780 lb (1,261kg) of cargo was delivered and unloaded by the crew. Before its departure, the empty Cygnus spacecraft was loaded with 2,200 lbs (1,000 kg) of discarded items, which will be incinerated upon reentry tomorrow, Feb. 19. NASA and Orbital launched the C. Gordon Fullerton atop one of the company’s Antares boosters on Jan. 9, 2014. Photo Credit: Ivan Meyerovich / SpaceFlight Insider

During its time at the space station it was berthed to the nadir port of the Harmony module. It was released via the station’s Canadarm 2 by Expedition 38 crew including NASA astronaut Michael Hopkins and Japanese Aerospace Exploration Agency (JAXA) astronaut Koichi Wakata.

The flight of the C. Gordon Fullerton marked the first under the $1.9 billion contract that the Dulles, Virginia-based firm has with NASA. Under the terms of the Commercial Resupply Services or “CRS” contract, Orbital must fly eight cargo resupply missions to the space station through 2016.

NASA’s CRS program has seen not one, but two private companies, Orbital as well as Hawthorne, California-based Space Exploration Technologies (SpaceX). SpaceX has sent three of the firm’s Dragon spacecraft to the space station. The next CRS mission is currently scheduled to take place in March of 2014. The Cygnus spacecraft would be so much cooler if given a heat shield so it could be reusable and able to return cargo.
It could also then be given life support to act as a smaller, cheaper alternative to the SpaceX Dragon.