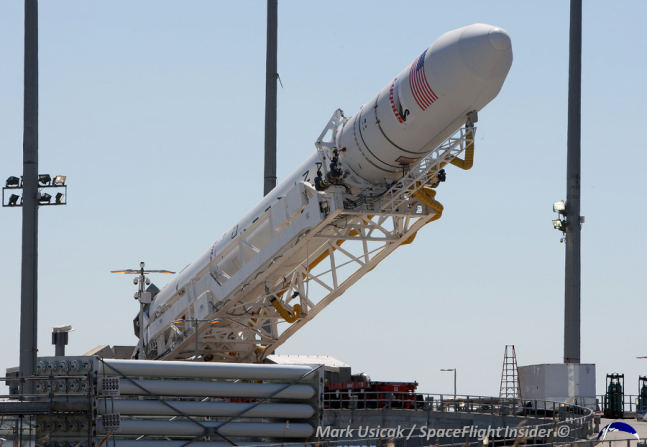 Orbital Sciences Corporation (Orbital ) has confirmed that it will replace the engines powering its Antares rocket, the AJ-26, with RD-181 engines supplied by Russia’s NPO Energomash. While other U.S.-based launch service providers are moving away from Russian-made rocket engines, Orbital has made the decision to move from one Russian-made engine to another.

Orbital had previously indicated that the AJ-26 would be replaced, but had not yet revealed the identity of the replacement engine.

Aviation Week first reported, on Dec. 16, that Orbital had chosen the RD-181. Later in the day, on Twitter, Orbital confirmed the information provided in the Aviation Week article and stated that the: “RD-181 engine meets schedule and technical requirements. No other options do . . . . [The] RD-181 is [the] only propulsion option that enables us to complete cargo commitments to @NASA under [the] #CRS contract by [the] end of 2016.” At present, Antares is not scheduled to fly until 2016. Photo Credit: NASA

According to Aviation Week, the RD-181 is a “descendant of the RD-171 that powers the Ukrainian-built Zenit launch vehicle [and] . . . . will be manufactured in the same Khimki factory that builds the RD-180 used on the United Launch Alliance [(ULA)] Atlas V. It closely resembles the RD-191 on Russia’s new Angara launcher and the RD-151 that powers South Korea’s Naro-1 launch vehicle.”

Orbital expects that “[f]irst deliveries of the newly built #RD-181 engines is mid-2015 to be ready for [the] next #Antares flight in early 2016.” Until that time, Orbital has purchased at least one ULA Atlas V rocket to launch its Cygnus spacecraft to the International Space Station (ISS) in order to meet the requirements under its $1.9 billion Commercial Resupply Services contract with NASA.

As has been previously reported, Orbital’s Antares rocket recently suffered a catastrophic launch failure – exploding and falling back onto its launch pad at NASA’s Wallops Flight Facility in Virginia.

Two AJ-26 engines powered the first stage of the Antares rocket and, even though the launch failure is still under investigation, Orbital has stated that the likely cause of the disaster was a turbopump located in one of the two engines.

The AJ-26 has a less than perfect history. In addition to the recent launch failure, the engine has suffered at least two relatively recent test failures.

In June 2011, an AJ-26 caught fire, and failed, in a test stand at NASA’s Stennis Space Center (SSC) in Mississippi, due to a fuel leak resulting from “stress corrosion cracking of the 40-year old metal.”

In addition, on May 22 of this year, another AJ-26 failed, in the same SSC test stand, approximately 30 seconds into a scheduled 54 second test.

When you state that ULA will build a new booster – do you mean a new rocket/stage?

How can that be? Congress just signed a bill banning russian rocket engines for future purchasing?
I am puzzled.

This is a link to an article about congress banning russian engines:

Anybody in the know how Orbital can still purchase russian engines?

The ban is only for defense (DOT) Launches

Ah sure. Thanks Tom. But then this decision shuts them out of defense contracts effectively.
Maybe more importantly, it does not look good to purchase from Russia in this political climate. Surely congress will have no warm feelings about Orbitals decision and that is bad for Orbitals lobbying with government. With this, Orbital is making the previous mistake to be dependent on the Russians all over again.

>Orbital is making the previous mistake to be dependent on the Russians all over again.

Well, AJ-26 is a soviet development Ukraine has inherited (Yuzhmash in Dnipropetrovsk). Those, this choice was in fact coherent with congress recommendation and result is as usual when politics interfere with engendering…

SIGH! I guess the people in charge at OSC haven’t learned a thing from ULA’s recent experience with the threats to the supply of RD-180 engines for the Atlas V. How long until the next international crises involving Russia threatens OSC’s supply of RD-181 engines for the Antares? It has taken decades of bad government policy and poor business decisions for the American rocket engine industry to get into the sad state it’s in today and it looks like it will be a lot longer before the situation is fixed.

Ok, yes, I can see the benefits there. Ship all your tax money to Russia! Great move by Orbital. Just forget about local jobs and innovation.

This was the easier decision to see coming. Orbital needed a new engine that was compatible with the design of the existing stages, and they needed it available to testing in 2015, for first launch Q1 2016, if not earlier. Go ahead and find out what other RP-1 engines are available that are almost direct replacements for the AJ-26 / NK-33. Aerojet has been slow with the development of their comparable sized engine, and their AR-1 isn’t close to ready when Orbital needs it. Another site had the total contract value up to 1 Billion dollars for 60 engines. If a domestic alternative can be had for between 15 and 20 million each, I’m sure Orbital might listen. In the meanwhile, they need to be back in the launch business, and this RD-181 was the only alternative.

If Orbital is not careful. They may just get left out on the phase 2 of this contract since now Boeing and SNC is bidding on it and they have vehicles that can return cargo.

But the enhanced Cygnus has more cargo capacity than the other vehicles. And now that they have a more powerful first stage engine, they can actually take advantage of the full capacity of Cygnus. More cargo in fewer flights means the ISS crew spends less time dealing with visiting vehicles, and more time on science.

Steve K, that all sounds good, but returning cargo is what NASA wants. Not only that, launching from Florida has a huge advantage as well.