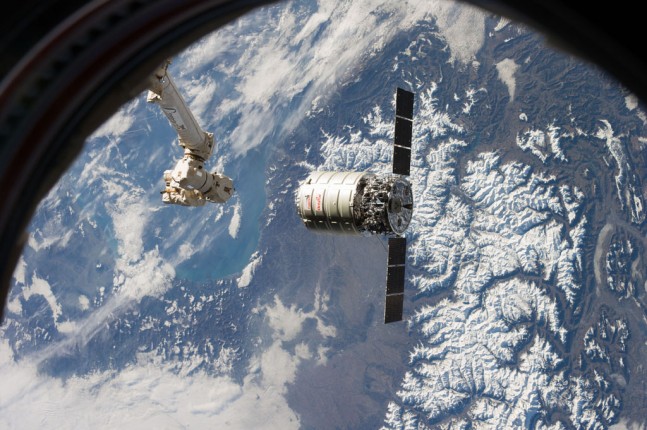 While Orbital Sciences Corporation (Orbital) prepares the next of the Cygnus spacecraft for the second cargo resupply mission to the International Space Station (ISS), the company is exploring future applications for the vehicle. Orbital is proposing possible ways that Cygnus could augment NASA’s Orion Multi-Purpose Crew Vehicle during manned missions into deep space.

Orbital’s proposal, outlined in this PDF, involves docking a Cygnus spacecraft with Orion to serve as a habitation and logistics module on longer flights. For these missions, the re-purposed Cygnus would be called the Exploration Augmentation Module (EAM). With its current life support systems used to transport pressurized cargo and experiments to the ISS, Cygnus is stated as being already suitable for the long term support of a crew. While berthed to Orion, Cygnus could support a crew of four for up to 60 days. Cygnus also has the capability of storing food, water, oxygen, and waste and features its own power and propulsion systems. The EAM would utilize the enhanced configuration Cygnus, which will begin flying larger cargoes to the ISS beginning with CRS-4 in 2015. An even larger version is also being proposed, featuring a 4-segment pressurized cargo module. The Exploration Augmentation Module could significantly enhance Orion’s deep space mission capabilities. It would allow for extended mission durations on flights to distant destinations, such as a lunar Lagrange point station or a near-Earth asteroid. As well as providing  extra living space for astronauts, the EAM could serve as a laboratory for medical studies on long term spaceflight beyond low Earth orbit. The module could also play a critical role in the event of an emergency situation. Like the Lunar Excursion Module during the Apollo program, the EAM and its life support systems could serve as a safe haven for the entire crew. Its power and propulsion systems would also add redundancy to critical systems on Orion that could be compromised.

Cygnus is already flight-proven and in production, which Orbital claims would then be a reliable and inexpensive option for NASA in conjunction with Orion. If selected for this endeavor, Cygnus’ production would continue at the end of the current Commercial Resupply Services contract, which currently extends to 2016. The Cygnus capsule and Canadarm2 during rendezvous and berthing operations on Jan. 12, 2014. Photo Credit: NASA

The Dulles, Virginia-based firm entered into contract with NASA back in 2008 to fulfill the need to deliver cargo and supplies to the astronauts aboard the space station. Last year, Cygnus completed its COTS Demo Flight Test, following up with its first official voyage to the ISS back in January, dubbed ORB-1. The next Cygnus mission (CRS ORB-2) is slated to launch to the International Space Station from Wallops Island, Virginia on June 10.

Exploration Augmentation Module (EAM) sent out first[via carrier–carried to Low Earth Orbit(?) then joined to high atmosphere rocket/thruster]. Could add weeks to a mission if it were coupled with a halting system-slowing and stopping, say-fifteen (changed from thirty) days into mission. It would wait twenty days to be Canadarmed by Orion, launched w/i ten days of Exploration Augmentation Module (EAM)egress from Low Earth Orbit.-Ernie Moore Jr.

Cygnus seems to increase by one point two meters and seven hundred kilograms. I wonder about interlocking shelving that is storage units which can stack-out from themselves for mix and match cargo. Thin but durable, to maximize containment with spacing-keeping the scrimping on the weight.-Ernie Moore Jr.

Will Cygnus be able to be built using the re-entry systems currently used aboard the Falcon 9 to land a Cygnus Module capable of sustaining humans on the Moon as a Lunar Habitat?