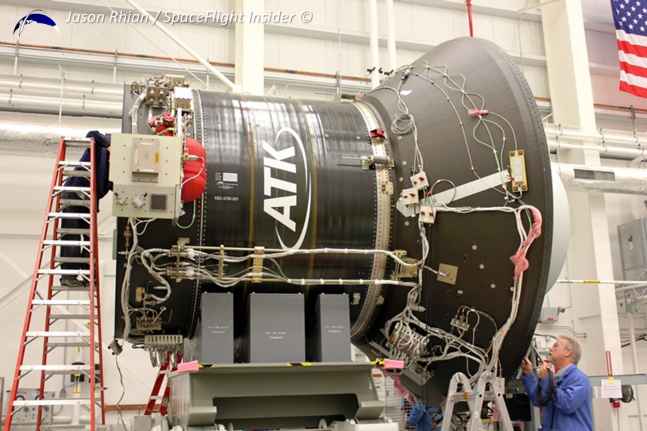 Mergers are a big part of the fabric of the aerospace industry. Martin-Marietta joined with Lockheed to form Lockheed-Martin, under a $10 billion merger announced in 1994. In that same year, Grumman purchased Northrop to form Northrop-Grumman. In 2006, after the bubble of commercial demand for launch services burst, Lockheed Martin and Boeing’s launch elements merged to form United Launch Alliance. Last year, Aerojet and Pratt & Whitney Rocketdyne combined to form Aerojet Rocketdyne. Now? There’s a new member of the merger “club”- Orbital ATK.

Dulles, Virginia-based Orbital Sciences Corporation (Orbital) and Utah-based ATK announced on Tuesday, April 29 that the two firms were combining forces to form Orbital ATK. This new entity, has been estimated to be worth about $4.5 billion (in terms of annual revenue from last year). The two companies provide a wide range of services relating to aviation, defense and space. With other offerings including arms, ammunition and other products. The transaction was unanimously agreed on by the boards of both companies and will be effected in a tax-free “Morris Trust” transaction structure at the end of 2014. This is dependent on the approval of shareholders from both companies, regulatory conditions and other terms. ATK also has a component which produces sporting goods – this will now be “spun off” to shareholders under this agreement. In terms of aerospace, the merger includes a tax-free stock-for-stock merger-of-equals transaction, valued at approximately $5.0 billion based on Orbital’s closing stock price on April 28. Orbital’s small-and medium-class satellite and launch vehicle product lines will be combined with ATK’s rocket propulsion, composite structures and space power systems.

The two companies have a history of working together, most notably on Orbital’s Antares launch vehicle, of which ATK provides the Castor series of solid rocket motors for the rocket’s upper stage. Antares is used under the $1.9 billion Commercial Services Contract that the firm has with NASA. Given the current state of the U.S. Space Program, their merger is not viewed by some as surprising.

“This merger-of-equals combination of Orbital and ATK Aerospace and Defense brings together two of the space and defense industry’s most innovative developers and cost-efficient manufacturers who have worked closely together for over 25 years. By building on complementary technologies, products and know-how and highly-compatible cultures, the new Orbital ATK will deliver even more affordable space, defense and aviation systems to our existing customers and be strongly positioned to expand into adjacent areas,” said David W. Thompson, Orbital’s President and Chief Executive Officer, who will become the new President and Chief Executive Officer of Orbital ATK. Thompson’s comments come from a release about the merger issued by Orbital.

The new company will draw from current leaders from both firms to manage the new company. A 16-member Board of Directors, led by Chairman Gen. Ronald R. Fogleman (U.S. Air Force, ret.) will be comprised of seven directors from ATK’s Board and nine directors from Orbital’s Board. Mr. Blake E. Larson, President of ATK’s Aerospace Group, will serve as its Chief Operating Officer; and Mr. Garrett E. Pierce, Orbital’s Chief Financial Officer, will hold the same position in the new company. According to Orbital, other key spots within the newly-formed company will be decided prior to the close of the merger. Orbital has already sent two of the company’s Cygnus spacecraft to the International Space Station via the $1.9 Commercial Resupply Services contract the firm has with NASA. Photo Credit: NASA

“We see opportunities to build on ATK’s success in Aerospace and Defense through a combination with Orbital’s proven track record in creating new launch vehicles, satellites and other advanced space technologies. We are both focused on enhancing the capability of existing customer systems by developing solutions that can be more flexibly deployed to support their mission with enhanced cost-effectiveness. We also see significant opportunities for growth as new programs are initiated or begin to ramp up production,” said Mr. Mark W. DeYoung, ATK’s Chief Executive Officer. The new company will employ approximately 13,000 individuals comprised of about 4,300 engineers and scientists along with an additional 7,400 staff to assist in an array of fields and professions. This merger will see the formation of a company with facilities in 17 different states within the United States. Once merged, Orbital ATK will be headquartered in Dulles, Virginia and will have major offices in Utah, Missouri, Virginia, Arizona, Maryland, West Virginia, California and Minnesota.

In terms of worth, Orbital ATK should have an estimated worth of about $4.5 billion combined revenues as reported in 2013 with a contract backlog estimated at $11 billion. Through this merger, ATK’s shareholders will own about 53.8 percent equity of Orbital ATK, with Orbital’s shareholder’s owning the remaining 46.2 percent.

“We are creating two strong, standalone companies committed to sustained leadership and success in their markets,” DeYoung said. “ATK’s Board of Directors and management team continuously evaluate opportunities to best position the company to drive value for its shareholders. This transaction presents a compelling opportunity to position and build strong, durable and focused enterprises that deliver innovation, execution excellence and enhanced opportunities for our customers, partners and employees, and thereby deliver long-term shareholder value. Orbital has been a customer of ATK for more than 25 years; we are familiar with each other and each company’s capabilities, and our respective cultures share a commitment to innovation and excellence. This alignment provides a solid opportunity to deliver great products to our customers at affordable prices with the opportunity to capture significant synergies.”