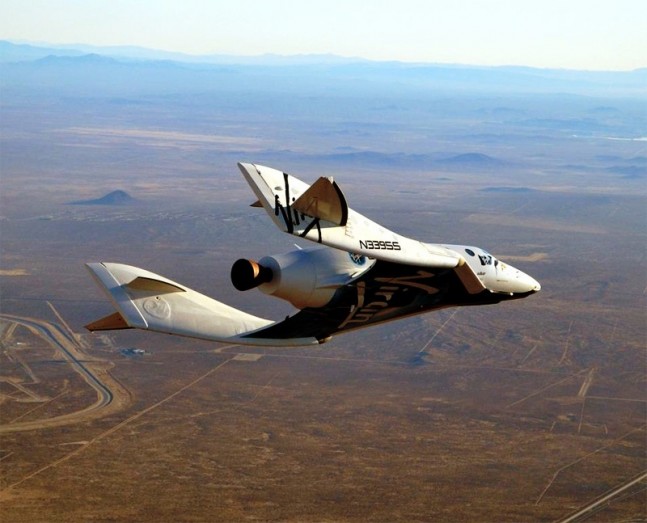 NASA’s Flight Opportunities program has selected 12 experimentation payloads to take part in their space research flight aboard Virgin Galactic’s SpaceShipTwo. John Hopkins University Applied Physics Laboratory (APL) will be one of the organizations to take advantage of studying a little-known region of suborbital “sky” that borders between Earth’s atmosphere and outer space.

APL’s experiment will involve the use of an Electromagnetic Field Measurements instrument, which is designed to study and categorize changes that occur within a spacecraft’s internal electromagnetic field. Earth’s geomagnetic field, which is created by the motion of molten iron alloys in its outer core, creates a protective region around our planet that shields our planetary surface and upper atmosphere from the damaging effects of streaming charged particles from the Sun and other forms of cosmic radiation. “This data will enable future payloads designed to make scientific observations of Earth’s magnetic field to cancel out interference from the spacecraft,” said APL’s H. Todd Smith, the Electromagnetic Field Measurements principal investigator, in a statement released by APL. “Ultimately, our payload will serve as an integration platform for future scientific research and instrument development activities.”

The primary advantage gained from experimentation in this suborbital region, located 50 miles above ground, is found within the privately-funded spacecraft. SpaceShipTwo is designed to be reusable and launched into microgravity for a 90-minute flight at a far reduced cost when compared to typical orbital missions. The craft will utilize a high-capacity internal environment and be flown at a height that is in between aircraft and high-altitude balloon elevations, and low-Earth-orbit (LEO) the International Space Station operates.

Some of the other research payloads on this flight will include technological experiments on components for 3D printers designed to operate in space, a prototype orbiting fuel depot for long duration space missions, a newly designed cryogenic fuel pump system, and more. “Virgin Galactic is thrilled to be working with NASA and researchers at such a range of prestigious institutions, and we look forward to flying these research payloads into space,” said Virgin Galactic CEO George Whitesides, in a statement released by Virgin Galactic. “Our vision for Virgin Galactic is to increase access to space, not just for individuals to experience spaceflight, but to advance humanity by driving significant technological advancement and research. We are proud to have NASA’s Space Technology Mission Directorate as a customer and to be able to facilitate their important work.”

APL is planning to launch three other experiments under NASA’s Flight Opportunities program in the future. To prepare for the research in this field, APL held meetings last year to look for potential developmental projects utilizing this type of commercial-built launch vehicle. Though none of the flights have a confirmed launch date, progress is steadily being made in the development and testing of Virgin Galactic’s spacecrafts.

Virgin Galactic, which is owned by Sir Richard Branson’s Virgin Group and Aabar Investments PJS, has an ultimate goal of becoming the world’s first commercial spaceline. Over 700 investors have shown interest in purchasing tickets on future Virgin Galactic flights at $250,000 a seat. The company states they have accepted more than $80 million in deposits that have been used to fund the development of flight vehicles, which are currently in their final testing phase.

Though there is currently no scheduled launches for space tourists or research projects, increasing interest by private citizens, NASA and other organizations, continue to select the company for a variety of the space agency’s efforts.