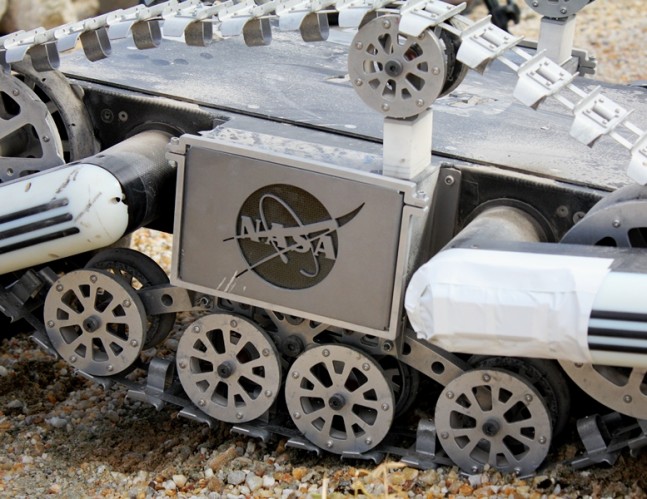 KENNEDY SPACE CENTER, Fla — Moon Express, one of the primary competitors under the Google Lunar XPRIZE or “GLXP” – is poised to begin vehicle testing of the team’s MX-1 spacecraft. To help them gain critical data regarding the flight characteristics of the toroidal-shaped (think donut) spacecraft, Moon Express Inc. (Moon Ex), will conduct testing at NASA’s Kennedy Space Center Shuttle Landing Facility or “SLF” – which has sported a hazard avoidance area for the past three years. Moon Ex and NASA highlighted these upcoming tests during an event held on Monday Nov. 3 at 2 p.m. EST (1800 GMT).

The company will carry out these tests under NASA’s Lunar Cargo Transportation and Landing by Soft Touchdown or “CATALYST” initiative. Moon Ex’s Co-Founder and CEO Robert Richards described the relations between the space agency and his organization in his opening remarks at the SLF on Monday. “We wouldn’t be here without them (NASA). But, the only thing is not only are we standing on the shoulders of giants – were working shoulder-to-shoulder with our friends at NASA – learning, and we will become, as a result, the first private company to reach the Moon – within two years.” Richards said.

Lunar CATALYST, is one of the growing number of NASA-sponsored initiatives designed to foster growing collaboration between the public and private sectors. Under Lunar CATALYST, private  organizations are being given the opportunity to develop and produce robotic lunar landers.

“It’s great that we can come here to Kennedy Space Center, under these agreements that we have with NASA under the CATALYST program – and take advantage of these incredible assets and the incredible people here – that we’re going to learn from – and they’ll learn from us,” Richards said. RASSOR was put through its paces during a demonstration near KSC’s Shuttle Landing Facility on Nov. 3, 2014. Photo Credit: Jason Rhian / SpaceFlight Insider

Public-private partnerships are all the rage from the Beltway to the Space Coast.

Lunar CATALYST is being carried out through an un-funded Space Act Agreement (SAA). Point of fact, a good many of these initiatives see no taxpayer funds exchange hands. In this case, the company is utilizing the wealth of experience and resources that the space agency has at its disposal.

Moon Express will work beside NASA’s Project Morpheus, a program designed to use off-the-shelf (relatively speaking) hardware to develop a prototype planetary lander capable of vertical takeoff and landing or “VTOL.” Morpheus will be used to test out technologies which could be employed on future crewed and unmanned spacecraft.

Moon Express will also make use of the autonomous landing and hazard avoidance technology’s, or ALHAT‘s, hazard field – located at the end of the SLF – which was the setting from which technicians and engineers with NASA’s Swamp Works laboratory -demonstrated some of their wares.

Essentially a mockup of the lunar landscape, the field has improvised craters and mounds of rocks which provide a crucial test site for the vehicles who have their designs tested here.

NASA demonstrated the Regolith Advanced Surface Systems Operations Robot or “RASSOR” (pronounced “razor”) at the hazard field. Rob Mueller, detailed that “swarms” of this type of robot would be sent up on a precursor missions – to prepare the site for future crewed missions.

“Several of these machines would go to the Moon or Mars on a small lander, where we can actually do remote operations before the astronauts get there and prepare the way for the astronauts,” Mueller said as RASSOR churned up gravel that once resided at the crawlerway that the shuttle orbiter would trundle down on its way to launch. “This is a mining robot, its designed to mine regolith and extract the resources from that regolith.” Moon Express was formed in Aug. 2010 by Robert D. Richards, Barney Pell and Naveen Jain to provide commercial lunar robotic transportation services with an eye toward mining the Moon’s rich store of natural resources. These include minerals that are rare on Earth, such as dysprosium, niobium and yttrium. The company is headquartered at NASA’s Research Park, which is located at Moffett Field in California.

A special guest showed up during the presentation, Buzz Aldrin, one of the two Apollo 11 astronauts that conducted the first lunar landing in 1969. They were joined by Aldrin’s son, Andy, who used to work for Colorado-based United Launch Alliance (ULA ) before joining Moon Express as the company’s president in March of this year.

Andy Aldrin noted that besides the technical and logistical benefits of working so close with NASA – there was also the extra-added bonus of working side-by-side with representatives of the agency that has launched more than 160 crews to orbit – and nine missions that, at a minimum, orbited the Moon.

“While we have only been here for little less than a week, not a tremendous amount of personal exchanges have taken place – but there will be. We have every intention of sitting down to lunch with these guys and probably beers afterward to learn more. I’ll tell you right now, the NASA guys throughout the agency, not just here at KSC, the guys at Marshall (Space Flight Center) have been incredibly helpful at solving problems, the guys at Ames (Research Center) as well, in fact, we’ve swiped quite a few people…or I should say that we kind of ‘borrowed them permanently (laughs).'”

Moon Ex’s plans to mine the Moon have a sound legal basis. While the Outer Space Treaty of 1967 states that nations cannot lay claim to the Moon – there is no such restrictions on private organizations – which opens up the possibility of companies conducting mining operations on the lunar surface. Moon Ex has made steady progress toward accomplishing its goals. On June 30, 2011, the company conducted a successful test fight of its prototype lunar lander system, the Lander Test Vehicle (LTV) that was developed in partnership with NASA. In September of that same year the firm announced that it had established facilities to produce the “Moon Express Robotics Lab for INnovation” (MERLIN) lunar probe.

In the following year, the company announced it would be collaborating with the International Lunar Observatory Association or “ILOA” to place an astronomical telescope in orbit above the lunar surface. Far from the bus-sized Hubble Space Telescope, this space-based observatory would be about the size of a shoebox.

In July of 2013, Moon Ex provided better information, detailing that this mission would actually include two telescopes. The first would be a radio telescope measuring some 6 and a half feet (2 meters) in diameter. The second would be a optical telescope. If all goes according to plan, the duo would launch in 2018, touching down in the Moon’s Malapert crater – the high point of which is more than 3 miles (5 kilometers) in altitude. Moon Ex has stated in the past that they would be ready to launch to the Moon as early as 2018.

Since its formation, the company has become one of the two main competitors under the GLXP (the other being Astrobotic) and has acquired Rocket City Space Pioneers under an agreement signed in December of 2012. This agreement saw Tim Pickens join Moon Ex as the company’s Chief Propulsion Officer. For Moon Express, this was just the start. As Moon Express and NASA work to build the partnerships of the future – the collected media could not help but notice that the mate-demate device, used to stack the shuttle atop the Shuttle Carrier Aircarft – was being dismantled. Photo Credit: Jason Rhian / SpaceFlight Insider

In September of 2013, the company gained Dr. Paul Spudis to its all-star lineup. Three months later, in December of that year, the company unveiled the “MX-1” lunar lander. The spacecraft will utilize hydrogen peroxide as propellant. Aldrin and Richards noted that the spacecraft which will be sent to the Moon is “launch vehicle agnostic” – meaning that it can use SpaceX’s Falcon 9, ULA’s Atlas or Delta families of boosters – and even stated that, while unlikely to be chosen, it could fly on either European or Russian launch systems.

“It’s completely modular (referring to the MX-1 spacecraft), there’s a structure within the booster that can support five satellites on the outside – we actually would fit in the middle of this,” Aldrin said.

Moon Express became one of three companies selected to produce potential lunar landers under Lunar Catalyst in September of 2013. The SAA the firm has signed with the space agency is designed to initially last for three years and, as noted, is just one of the West Coast firm’s efforts.

As one of the organization’s competing under the Google Lunar X PRIZE, Moon Express stands to be awarded $20 million if they can successfully land a rover on the dusty lunar surface, have it traverse 1,640 feet (500 meters) and relay data, still images and video back to Earth. According to Moon Ex’s Naveen Jain, only two of the 33 company’s involved with the GLXP have been selected to compete for all three prizes under the GLXP (the other being Astrobotic).

“There is no doubt about it that we are, at this point, the front leader and absolutely destined to win!” Jain said.

I am a Boeing retired Sr Principle Engineer and worked on Space Shuttle for 20 years (STS-1 through STS-102 and 13 years on GMD, ABMD & GPS as a system Integrator SSM. I am very interested to read about NASA’s space programs