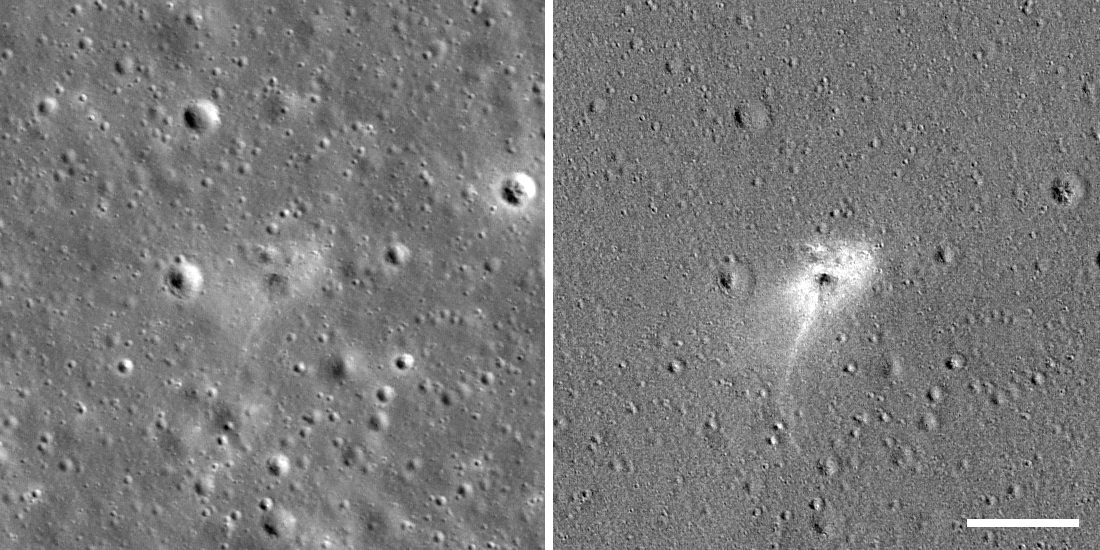 Before and after photos of the Beresheet lander’s impact site. Photo Credit: NASA/GSFC/Arizona State University

NASA’s Lunar Reconnaissance Orbiter (LRO) has located the crash site of SpaceIL‘s Beresheet lander, which impacted the Moon after experiencing a critical failure during its attempted lunar landing on April 11, 2019.

The first commercial spacecraft to enter lunar orbit, Beresheet was supposed to land in the Sea of Serenity on the lunar near side. An ongoing investigation into the crash by SpaceIL has attributed the landing failure, which occurred when the lander was less than 0.62 miles (1 kilometer) from the Moon’s surface, to a software problem.

A before and after gif of the impact site. The “before” image is from December 16, 2018, while the “after” image was taken 11 days after the crash. Photo Credit: NASA/GSFC/Arizona State University

Beresheet’s impact created a new crater, as did various other spacecraft, such as the two GRAIL probes and LADEE, that impacted the Moon over decades of exploration. Some impacts were intentional while others were the results of failed missions.

Beresheet’s impact crater and surface changes caused by the crash are clearly visible in an image of the site taken by the LRO camera. At the point of impact, a dark smudge approximately 32.9 feet (10 meters) wide, surface reflectivity is reduced by around 10%. A 98-to-164-foot (30-to-50-meter) area surrounding the dark smudge is 20% brighter than it was, with a ray feature extending about 328 feet (100 meters) downward.

Changes caused by the crash are valuable to scientists because studying them could lead to a better understanding of the lunar regolith. LRO’s camera can image this area over regular intervals in an effort to determine whether any further changes to the surface material occur.

Launched in June 2009, LRO has been orbiting the Moon’s poles for nearly 10 years. Its purpose is to map the Moon’s surface, search for lunar resources, identify possible landing sites for future robotic and human missions, characterize the radiation environment, and illustrate new technologies.

SpaceIL, the Israeli non-profit that initially organized the Beresheet project to win the Google Lunar XPRIZE, continued its effort after the $30 million contest was declared over with no winner in early 2018. However, the X Prize Foundation awarded SpaceIL a $1 million “Moonshot Award” last month for reaching the Moon’s surface.

Three days after Beresheet’s failed landing, SpaceIL announced plans to land a second spacecraft, Beresheet 2, on the Moon. The project is expected to take between two and three years.