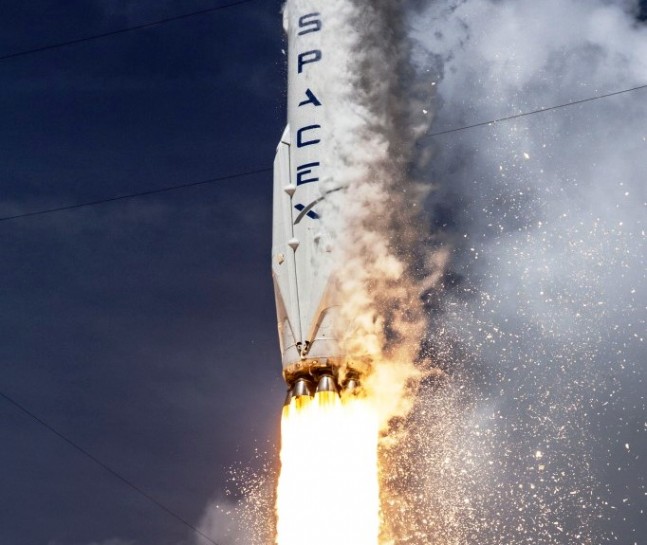 CAPE CANAVERAL, Fla — The planned Dec.9, 2014 launch of a Space Exploration Technologies (SpaceX) Falcon 9 v1.1 rocket and its Dragon spacecraft – has been delayed a week – to no-earlier-than Dec. 16, 2014. The cause for this delay appears to be related to the loss of an Orbital Sciences Corporation Antares rocket and its Cygnus spacecraft. Also lost was about 5,000 lbs of cargo during the Oct. 28 accident. Meanwhile, images have appeared of the barge that SpaceX will deploy during the upcoming flight -which the company will use to land the rocket’s first stage on. “X” marks the spot where SpaceX will attempt to land he first stage of the company’s Falcon 9 rocket. Image Credit: SpaceX

The flight will mark the sixth time that one of the Hawthorne, California-based company’s Dragon spacecraft has been sent to the space station. The mission is being carried out under the $1.6 billion Commercial Resupply Services contract. SpaceX has to deliver 20,000 kilograms of cargo to the outpost – by 2016.

The delay for this mission appears to have been precipitated by a requirement to reshuffle the cargo manifest after the Orb-3 failure.

At present, the company is well on its way to accomplishing this and has begun looking at developing new technologies to help lower the cost to orbit. One of these is the company’s efforts to have the Falcon 9’s first stage actually fly back to the launch site. SpaceX has taken a step-by-step approach.

The firm has already carried out two landing attempts out in the Atlantic Ocean and has now opted to move on to the next level – having the booster’s first stage land on a barge positioned out in the Atlantic. SpaceX CEO and Founder Elon Musk tweeted an image of this craft along with the following statement.

It now appears that SpaceX will carry out this landing during the Dec. 16 launch attempt. The platform measures some 300 x 100 feet ( 90 x 35 meters) and is currently being built by the NewSpace firm in Louisiana.

If successful, this will be the first time that a rocket’s stage has conducted a solid-surface landing during an actual mission.

This article was edited at 1 a.m. EST on Nov. 23 to correct an error regarding the weight that SpaceX is required to deliver to the ISS

Thanks Phillip,
I believe we corrected it.
Sincerely and with kind regards, Jason Rhian – Editor, SpaceFlight Insider

Very cool progress for Dragon 6. I’m wondering if there will be a way to stabilize the booster once it lands on the barge? It would be a shame for it to tip over shortly after landing. I’m sure there will be lots more information to come. Can’t wait for the video. Fingers crossed.

Generally that will not be necessary. The center of gravity of the stage is very low as, when the fuel tanks are (almost) empty, most of the weight is in the engines.

I believe the legs will be good enough to handle the loads before they can be locked down. If the platform is stable, which it sounds like it is, then it should work. You can bet that Tony Stark, eh, Elon Musk has thought of that already.

Thanks for getting that Info out to the rest of us. With the CRS-5 launch getting so close, I knew it had to show up soon or not make it for this attempt. Now lets all hope hope fair weather and calm seas. Good Luck SpaceX

Helicopters have a better center of gravity than a tube shaped vertical launcher, and they have difficulty at times in the Atlantic. That’s why they have wire netting on the Navy ships to catch the helicopters just in case. I have some doubts about this with the winds pushing and the waves rolling, good luck if the ideal weather is present.

I disagree, James. Most of the weight of a helicopter is in the engine and rotor blades. These are at the top of the machine. So COG of a helicopter would be two thirds at least from it’s base. For an (almost) empty stage the reverse would be true. It would seem to me, though, they would still have to allow for the rolling of the barge and any cross winds, like when attempting to land on solid ground, they would have to allow for uneven terrain and cross winds. Perhaps they could have a mechanism, like Philae, that could fire harpoons upon landing, only hopefully, ones that work. LOL.

@ James… Tiny quibble James…I’m no expert but I spent some time on navy ships. The catwalks around the decks of carriers (CVx, LPH, LHA, etc.) are there not for the equipment but the crew – when something nasty happens on a flight deck (and lots of nasty things do happen), the crew wants to get out of the way somewhere quickly – and that means diving off the deck and into the catwalk.

As far as lessons learned on landing on a large flat deck in a pitching and rolling ocean – the Marine Corps pilots I know would tell you it takes a fine sense of timing to judge the moment to touchdown on the deck. More that a few helicoptors have been bounced when the deck and the helo have a disagreement on pitch, roll, wind and vertical speed.

I have heard some people guess that the flaps on the ship could fold up to pin the booster down.

@John_Gardi was the guy that asked Musk to release the picture of the barge.
Musk has us on the road to affordable space flight the only possible path to Mars as I see it.

I’m 74 so don’t be too rough on my dumb question(s)
I thought I read somewhere that the fins were invented by the Russians….

How come the barge would be in the Atlantic? I figured putting it in the Gulf of Mex. would be closer to TX.

Won’t it someday be Falcon’s job to be tugboat in moving the ISS back on station or out of the way of space junk. I have some more ques about space junk for a later post…
Sparpsburg KY USA

@Gramps The rocket will take off in Forida. The Brownsville Texas launch site is still being built from the ground up. I wouldn’t expect to see a launch from there for a couple more years. This is really about resupplying the ISS and that is the primary mission for the rocket. The test landing is just that, a test. I really hope it is successful and we get some spectacular footage of the landing though.

I doubt this will work, but wish them all the luck. If it does, hopefully this will mean more jobs at Kennedy.

Why not start over, and make a recovery platform on the same NAVY FLIP ship.So they can recover in almost any sea condition, have a platform that will open to land on and then they can stow it in the ship just by lowering from the platform into the belly of it. I what in on this…