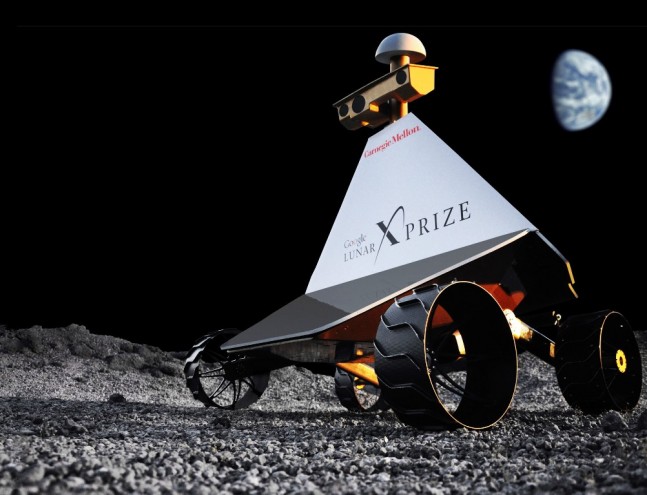 The last crewed mission to the Moon took place more than four decades ago, and ever since, humanity seems to have a new target in its sights – Mars. Private industry on the other hand has been working diligently to explore more of the lunar surface. With the help of Google’s Lunar X PRIZE, four companies are developing their own unique landers with a goal of touching down on the lunar regolith – as early as 2016. With their own designs and goals, the companies are working toward a new era in lunar exploration.

One of these, Moon Express, is developing a lander (MX-1) designed to reach the Moon’s surface from a geosynchronous transfer orbit (GTO). Hitching a ride on a commercial rocket as a secondary payload on a commercial rocket, the lander is powered by a 90 percent solution of hydrogen peroxide.

The recent discovery of water at the polar region of the Moon has spurred Moon Express’ desire to mine rare materials from the lunar surface and to return them to Earth. Water, as we know, is H2O, but if you add an extra oxygen atom, you get H2O2 or hydrogen peroxide. The water on the lunar surface provides the chemical elements necessary to manufacture hydrogen peroxide and other fuels. Eventually, the lander will be able to land on the Moon, and convert lunar water to hydrogen peroxide for a return trip to Earth.

“Our MX-1 spacecraft design was a result of brilliant engineers being allowed to innovate with very few requirements. To slay our primary cost driver of launch system, we need to fly as a secondary payload, so we designed the highest energy density and lowest mass fraction single stage spacecraft that could fit inside an adapter ring and still be able to reach the surface of the Moon from Earth orbit, Moon Express’ CEO Bob Richards told SpaceFlight Insider. “After iterating several designs, we converged on our current toroidal design and the use of HTP fuel that we’ve been flight testing at the Kennedy Space Center.”

Another contender vying to win the Google Lunar X PRIZE has adopted a different method to land  a spacecraft in the dusty fields found on the Moon – and claim the $20 million grand prize.

Astrobotic’s Griffin lunar lander features flexible payload mounts, which can accommodate a variety of rovers and other payloads to support robotic missions. It employs cameras as well as LIDAR in order to safely land autonomously within 328 feet (100 meters) of any targeted landing site, even in rugged terrain.

Griffin’s stout aluminum frame is stiff and simplistic for easy payload integration, with four legs for shock absorption and stabilization during touchdown. As far as what it can carry, when launched, possibly on a SpaceX Falcon 9 v1.1 rocket, Griffin is expected to handle a varying payload mass of 1,462 lbs (663 kg) to the trans-lunar injection (TLI) point, 1,135 lbs (515 kg) to lunar orbit, and 595 lbs (270 kg) to the surface of the Moon. Moon Express and other contenders under the GLXP have shown interest in SpaceX’s Falcon 9 booster for their ride to orbit. Photo Credit: Mike Howard / SpaceFlight Insider

“For the Apollo missions, the human crew observed their surroundings from the Lunar Excursion Module windows in order to navigate and avoid hazards,” Astrobotic’s Chief Technology Officer, Kevin Peterson, told SpaceFlight Insider. “The Griffin lander’s guidance system perceives and reacts like those human pilots did by processing sensor input to generate trajectory updates. Close to the surface, the system uses LIDAR to identify and avoid hazards.”

Although Moon Express and Astrobotic are considered to be the front-runners in the GLXP – they are not alone in their lunar aspirations.

Part Time Scientists  are composed of team members that are spread across Northern Germany and around the world. The team makes extensive use of online collaborative tools to keep everyone up to date and moving forward.

They are developing their own lunar lander and rover, and plan to contribute to the development and building of the global Communication Array Project, or COMRAY. This network will link together radio dishes from around the world to allow 24/7 communications with in-space assets. Utilizing amateur radio frequencies, the network could be a cheaper alternative to existing government and commercial networks.

With approximately a year before the close of the latest extension of the GLXP, unconfirmed reports have Astrobotic flying on a SpaceX Falcon 9 v1.1 booster, potentially as early as the latter half of 2016. Moon Express recently announced that it would be developing Cape Canaveral’s Space Launch Complex 36 for its efforts.

This article was updated at 8:45 p.m. EDT regarding Astrobotic’s planned flight on a SpaceX Falcon 9 rocket.