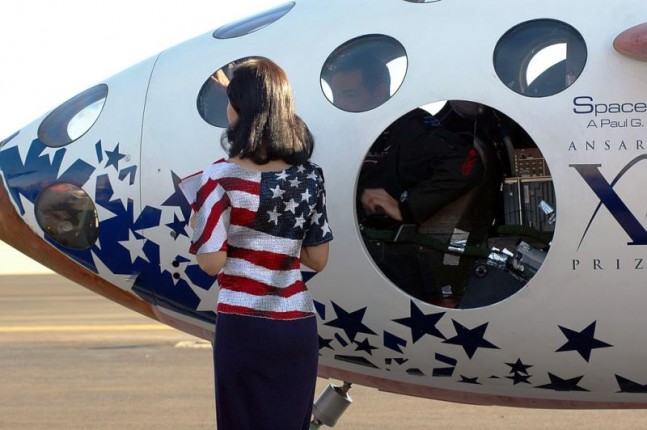 It has been a full decade since Scaled Composite's SpaceShipOne won the Ansari X-PRIZE. Photo Credit: D. Ramey Logan

When Brian Binnie took off, inside SpaceShipOne, which was safely tucked under Scaled Composites’ White Knight One aircraft, it looked as if the promise of the NewSpace era – was finally about to come true. More than a decade after the historic “17P” flight– the world is still waiting. With the successful conclusion of the 17P flight on Oct. 4, 2004, SpaceShipOne completed the requirements under the Ansari X-PRIZE. However, in the decade since, the follow-on efforts to get the average citizens into space – have stalled.

Initial estimates had paying customers roaring into sub-orbit on the follow-on for this successful design, SpaceShipTwo – as early as 2007. However, that date has repeatedly slipped, with Virgin Galacitic’s owner, Sir Richard Branson, recently admitting that the first “commercial” flight will not take place until sometime in early 2015. Parabolic Arc noted that Branson made the promises that: “Within five years, Virgin Galactic will have created over 3,000 new astronauts from many countries.” Depending on the exact timeline of Branson’s comment, this would either place his estimate at 2009 or 2012. As 2014 winds to an end, the number of new tourist astronauts minted by SpaceShipTwo stands at zero.

17P (since renamed X2) was the second competitive flight under the Ansari X-PRIZE that Scaled undertook as part of the company’s Tier One program. Scaled’s efforts, under the X-PRIZE, helped validate the notion that a government agency was not required to carry out suborbital operations.

Scaled Composites, now a subsidiary of Northrop Grumman (Northrop Grumman purchased 100 percent stock in the company in July of 2007), issued a statement on the 10th anniversary that it will: “…continue to push the bounds of aviation and the emerging commercial space industry.”

On July 26, 2007 an accident occurred during an oxidizer flow test at the Mojave Air and Space Port. This test involved filling the oxidizer tank with about 10,000 lbs (4,500 kg) of nitrous oxide, more commonly known as “laughing gas.” After that a 15-second cold-flow injector test was carried out. Three people were killed and two were critically injured from an explosion that occurred during that test. The accident marked an apparent slowing down of the first commercial flight. The hybrid rocket motor has proven to be problematic for the NewSpace firm. The issues with it might be at least partially responsible for the extensive delays in the flight test program alone. SpaceShipOne soars through the atmosphere on its way to sub-orbit. Photo Credit: Scaled Composites

SpaceShipTwo’s engine utilized hydroxyl-terminated polybutadiene or “HTPB” and nitrous oxide – as the oxidizer. The engine used this fuel from 2009 until May of this year when the engine design was changed from a HTPB to a polyamide fuel formulation.

Dubbed the “VSS Enterprise” SpaceShipTwo is designed, just as SpaceShipOne was, to be carried aloft by its mother aircraft, White Knight Two. It is then released in the upper atmosphere, where it is then released. The spacecraft then activates its rocket engine ferrying passengers into sub-orbit where it will take clients on an arc that will allow them a few moments of microgravity and a unique perspective of their home world. It will then glide to Earth, using the “feathering” atmospheric reentry system.

SpaceShipTwo conducted its first successful powered test flight on April 29, 2013. The Spaceship Company has been booking flights for some time, each ticket costs $200,000 dollars.