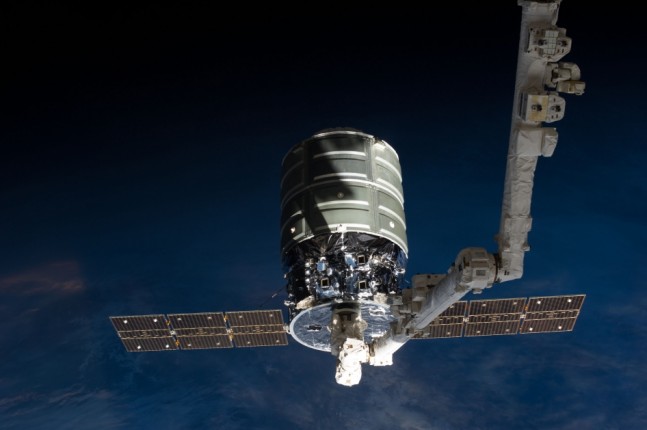 The second of Orbital Sciences Corporation's Cygnus space, dubbed the C. Gordon Fullerton, was grappled by crew on the International Space Station and berthed with the orbiting laboratory on Jan. 12 at 6:02 a.m. EST (11:02 GMT). This images is from the previous flight of Cygnus to the ISS. Photo Credit: NASA

Expedition 38 astronauts onboard the International Space Station (ISS) welcomed the arrival of the Orbital Sciences’ C. Gordon Fullerton (Cygnus) spacecraft, the company’s first operational mission under the Commercial Resupply Services (CRS) contract with NASA. Carrying approximately 2,780 pounds (1,260 kg.)  of food, supplies and experiments, Cygnus is part of the international community’s program of maintaining the ISS, and is the first of three scheduled missions Orbital has manifested for 2014. Under a highly-flexible mission design, launches could occur over a several day period yet the final rendezvous, capture took place at 6:08 EST (11:08 GMT), January 12 above the Indian Ocean. Installation was called complete by NASA at 8:05 a.m. EST (13:05 a.m. GMT).

Launched from the Mid-Atlantic Regional Spaceport (MARS) located at NASA’s Wallops Flight Facility, Orbital Science’s Antares rocket rose from pad 0-A at 1:32p.m. EST on January 9. After a 10 minute ascent, Cygnus separated from its booster stage and unfurled it solar arrays to began its three-day trip to the ISS. Immediately after launch, Orbital’s controllers located at the company’s headquarters in Dulles, Virginia (a beltway suburb of Washington, D.C.) monitored the progress of Cygnus’s flight. Inserted into a lower, faster orbit than the ISS, Cygnus was then able to “catch up” with the ISS, gradually adjusting its path in a carefully coordinated sequence of maneuvers. Each maneuver adjusted the orbit of the supply craft, raising its altitude and adjusting its “phasing”, the timing of when Cygnus and the ISS would arrive at certain points in space. As each on-orbit milestone was passed, a subsequent burn would move Cygnus closer to the station.

Eventually, Cygnus reached a point 2.5 miles (4 km) underneath the ISS. At this point, control transitioned from Orbital’s control to a jointly coordinated operation between Orbital and NASA’s Mission Control center located in Houston, Texas.  Entering the “R-bar” rendezvous mode, Cygnus appeared to rise vertically towards the station.

Still in a lower orbit than the station, Cygnus was moving faster than the station and could not maintain its position for even a short time. In quick succession, controllers in Dulles and Houston assessed the progress to date, and gave their “go” to continue the approach. Firing its engines, Cygnus raised its orbit from its holding point 2.5 miles (4 km) below the station to approximately one mile (1.5 km) away. Now close enough to acquire the station with its LIDAR (a laser based ranging system) data on relative range and rates were incorporated into the autonomous rendezvous guidance. From this information, Cygnus calculated several closing and braking maneuvers. A total of five separate burns moved the cargo vessel in small steps towards the station which included small midcourse corrections.

Although the early stages of the rendezvous were visible to the crew onboard the ISS, there was little to do onboard the station except observe its progress. As Cygnus closed for the final 250 meters, astronaut Michael Hopkins readied the Canadarm 2 to capture the spacecraft with the assistance of Japanese crewmate Koichi  Wakata. While the Cygnus cargo vessel was designed for use on NASA’s commercial cargo efforts, other uses for the spacecraft are currently under review. Photo Credit: Orbital

Unable to autonomously dock with the station, Cygnus slowly approached and parked itself about 35 feet from the station. Hopkins used the robotic arm to grapple Cygnus, and through a carefully choreographed set of rotations, berthed the spacecraft in the Earth facing port of the space station’s Harmony module. 2014 could be a very busy year for Orbital, with as many as three (including last week’s launch) flights of Antares on the company’s launch manifest. Photo Credit: Orbital

“Orbital joins SpaceX in fulfilling the promise of American innovation to maintain America’s leadership in space.  As commercial partners demonstrate their new systems for reaching the Station, we at NASA continue to focus on the technologies to reach an asteroid and Mars,” said NASA Administrator Charles Bolden in a NASA-issued statement. “The international crews aboard the station are working hard on the science and technology demonstrations to help us reach new destinations, and the expanded cargo transportation capability Orbital has now demonstrated strengthens that work.”

With Cygnus berthed at the ISS, the crew quickly went to work to opening the hatches and entering into the spacecraft. In addition to unpacking eagerly awaited fresh fruit and other perishable items, the crew will be setting up an experiment to study the social behavior of ants in a microgravity environment. Although previous flights observed how spiders and butterflies adapt to a space environment, the “Ants in Space” experiment will be the first time that the behavior of a large number of social animals interact as they forage for food. For Orbital, this latest voyage to the ISS highlighted another positive social interaction. Cygnus will stay at the station for 37 days before it is detached from the space station. Afterward it will conduct several maneuvers which will see it conduct a fiery, destructive reentry into Earth’s atmosphere. Photo Credit: NASA

“Our first mission under the CRS contract with NASA was flawlessly executed by our Antares and Cygnus operations team, from the picture-perfect launch from NASA’s Wallops Flight Facility to the rendezvous, capture and berthing at the space station this morning,” said Mr. David W. Thompson, Orbital’s President and Chief Executive Officer.  “From the men and women involved in the design, integration and test, to those who launched the Antares and operated the Cygnus, our whole team has performed at a very high level for our NASA customer and I am very proud of their extraordinary efforts.”

Over the next two to three days, the ISS crew will unpack the remaining cargo from Cygnus. Stored in individual bags weighing anywhere between 20 and 300 pounds on Earth, items will be unpacked, entered into the onboard inventory system and stored in locations across the station. Garbage in the form of used clothing, trash, biological waste and unneeded experiments will be carefully loaded onboard Cygnus. Undocking of the supply ship with its trash cargo is scheduled for mid-February, where it will orbit for two additional days to perform engineering evaluations. After spending 37 days at the station, the C. Gordon Fullerton will be unberthed. It will then fire its engine for one last time, enter the Earth’s atmosphere where it and its 2,800 lbs. (1,300 kg.) of “disposable cargo” will burn up over the south Pacific Ocean.

Orbital has taken to naming the Cygnus spacecraft it sends aloft in honor of astronauts who assisted in the company’s various efforts. The first Cygnus, which launched to the ISS in September of last year, was named after G. David Low, an astronaut who went on to become an executive with the company who died in 2008. Gordon Fullerton passed away this past August and was the-pilot of the B-52 aircraft which launched one of Orbital’s Pegasus air-launched rockets.