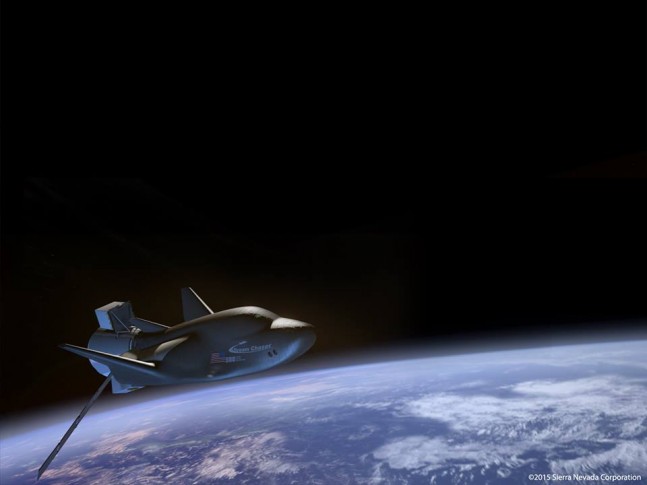 When Sierra Nevada Corporation’s Dream Chaser space plane was not selected under NASA’s Commercial Crew Program (CCP), it was viewed by many as the “death of a dream”. The play on words was not only a bit heavy, but also it appears to have been premature. Not only has the European Space Agency and Japan Aerospace Exploration Agency displayed interest in the craft – but a new version of the craft, with a new mission, was unveiled yesterday. This follows the recent announcement by Lockheed Martin that it has designed a new spacecraft for the second round of NASA’s Commercial Resupply Services contract.

NASA’s Commercial Resupply Services 2 (CRS 2) contract is poised to undergo bidding and both Lockheed Martin (LMCO) and Sierra Nevada Corporation have unveiled their offerings for this lucrative contract. In terms of SNC, the craft was the Dream Chaser Cargo System.

Like the Dream Chaser that competed under CCP, the craft’s design hearkens back to an earlier design. When NASA made cuts to the International Space Station’s budget, one of the elements that the space agency cut – was the X-38.

The cargo version of the Dream Chaser is seen in this SNC image with the new feature of having its wings tucked in. Image Credit: SNC

The X-38 was designed to be a “lifeboat” for the orbiting laboratory and was in the midst of drop tests in 2002 when it was cancelled. The X-38 itself was based off an earlier design; the vehicle can trace its design lineage back to the X-24 test article which flew in the 1970s.

If this iteration of the Dream Chaser is selected for use on the next round of NASA’s CRS contract, it could serve to disrupt one of the two firms currently working on the first round of the contract – SpaceX. To date, SpaceX is the only company that is capable of returning significant amounts of experiments and cargo from the station. SpaceX’s Dragon has a heat shield, comprised of PICA-X, which allows it to reenter Earth’s atmosphere. The only other spacecraft capable of this feat is Russia’s crew-rated Soyuz vessel. All other spacecraft burn up upon reentry.

SNC also touted the fact that the propulsion system which the Dream Chaser employs is: “non-toxic and non-hypergolic (meaning the fuels ignite when in contact with one another).”

Like the crew-rated version of the Dream Chaser, which was based off of the HL-20 lifting body, this new variant is similar to NASA’s retired fleet of shuttle orbiters in that it is reusable, capable of a low-g return to Earth via a landing on a runway. This capability would allow NASA to have immediate access to the experiments that have freshly-arrived from the station. Something not even SpaceX is presently able to offer (the capsule-based Dragon requires that it be recovered from the Pacific Ocean and brought back to dry land first).

“SNC is proud to offer NASA a complete system that exceeds all criteria set forth by NASA in the proposal,” said Mark N. Sirangelo, corporate vice president and head of SNC’s Space Systems. “The autonomous and upgraded Dream Chaser Cargo System is a mission variant of the Dream Chaser Space System, whose heritage includes over 10 years of development and maturation, the last five of which were complete as part of an ongoing public-private partnership between SNC and NASA. Our Dream Chaser Cargo System provides unrivaled capability for pressurized and unpressurized cargo transportation, including accelerated return of cargo and critical science on every mission. It also enables a wide portfolio of other space exploration capabilities, including servicing/construction for future space stations, satellite servicing and deployment, as well as retrieval and orbital debris removal. SNC continues to grow its U.S. team which has expanded to 30 states. We are also expanding our international partnerships, and have agreements in place with many of the current ISS partners and global space agencies. Our SNC team looks forward to becoming a cargo transportation provider for NASA missions.” The cargo version of Dream Chaser appears to have been designed off of the now-cancelled X-38 spacecraft. Photo Credit: NASA

SNC is not the only company to offer up a new spacecraft for the upcoming phase of CRS. Lockheed Martin has submitted a system, comprised of three parts under the contract: the Jupiter reusable spacecraft, the Exoliner cargo freighter, and a robotic arm, which were unveiled on March 12.

“Our approach is designed to deliver a large volume of critical supplies and cargo with each flight, and do so on schedule. That’s why we’re bringing together flight-proven technologies that are reliable, safe and cost-effective,” said Wanda Sigur, vice president and general manager of Lockheed Martin Space Systems’ Civil Space line of business.

Whereas SNC pulled from lifting body test articles, LMCO’s design comes from probes sent out into deep space. Specifically, the Mars Atmosphere and Volatile EvolutioN and Origins-Spectral Interpretation-Resource Identification-Security-Regolith Explorer, or OSIRIS-REx, were key LMCO-produced spacecraft that the company used when designing their offering under the next CRS contract.

With the Space Shuttle Program relegated to the history books, established and newer firms are vying from the contracts to keep the station going after more than 16 years total time on orbit.

SpaceX’s Dragon has encountered great success in terms of delivering crew supplies, cargo and experiments to the ISS. To date, six Dragon spacecraft have lifted off from Cape Canaveral Air Force Station’s Space Launch Complex 40 to the outpost. Three of Orbital ATK’s Cygnus cargo vessels have also flown to the space station under the first CRS contract.

NASA will now conduct extensive reviews of all the offerings under what is essentially the second chapter of the Commercial Resupply Services story and move forward with those that it feels can best suit its requirements.

After surviving several phases of NASA’s CCP effort, the crewed version of the Dream Chaser was not selected to move forward to the Commercial Crew transportation Capability round. The September 2014 decision prompted a protest from the Colorado-based company which was ultimately denied.

Unlike NASA, both the Japanese and European space agencies are considering the crewed version of the Dream Chaser for their astronauts. Moreover, the craft has been eyed by commercial firms such as Stratolaunch as well.

Orbital ATK better watch out. If I was NASA, I’d select one of these two and kick Orbital to the curb, especially since they are refusing to pay for the damage they caused to the wallops launch pad and the nerve of Orbital to expect the tax payer to foot the bill.

Jesse, Congress already set aside money to pay for that. It’s like a natural disaster.

DC cargo is a great concept and with the DC crew vehicle, makes for an awesome combined system. I like it better than LM’s reusable Jupiter/Exoliner concept.
So, if NASA chooses Cygnus/Antares, Dragon/F9 and DCCS/Atlas 5(2 launches/yr), they should have enough funds for 3. I get the feeling that LM & Boeing will be the two most expensive.

Art, I know a few of the engineers at wallops, and yes Congress did authorize the money but NASA is holding on to it and not releasing it for some strange reason. Some believe Orbital ATK is protesting, saying they want some of that 20 mil. that NASA has. For whatever reason the money is not making it to the Pad for rebuilding. The Mid Atlantic Regional Spaceport (MARS) director has already stated that if funding doesn’t come soon, Launch Pad reconstruction will come to a halt. Orbital wants the pad rebuilt but doesn’t want to pay, perhaps they know they’re on their way out.

Seems like Orbital need to ask their Senators & Representatives to send a letter of inquiry to NASA.

CRS2 isn’t a development contract. TTBOMK it’s only paying for services so all companies with new concepts or hardware that requires further development/testing will need to provide their own or investor’s funds to do so. The exceptions are Boeing and SpaceX who are receiving funding via CCtCap and Commercial Crew for their CST-100 and Dragon V2 respectively. However I don’t know how much if any of the CCtCap funding is going toward the cargo parts of their crew vehicles. I know SpaceX is rebidding Dragon Cargo for CRS2 with Dragon V2 carrying cargo a couple of years later according to Elon. Boeing I have no insight.
Cheers

If you are going to compare the dreamchaser to the dragon capsule (and that it has to be ‘retreived from the ocean’, then you are unfortunately blatantly ignoring its [the dragon’s] planned landing capability…. doesn’t that at least deserve to be mentioned? Sure, it hasn’t come to fruition yet, but If spaceX can land a falcon 9, then i have a heavy dose of faith that they will soon be landing the dragon…