Both Boeing and SpaceX are planning to carry out key abort tests of their CST-100 Starliner and Crewed Dragon spacecraft this coming week. Photo Credit: Boeing

If things go according to plan next week, NASA, Boeing and SpaceX will check key systems that are required to keep astronauts safe on their way to orbit. If these last checks can be completed, the agency could finally regain a capability it lost almost a decade ago.

The Pad Abort Test for Boeing’s CST-100 Starliner spacecraft is currently scheduled to take place on Monday, Nov. 4, from Launch Complex 32 at White Sands Missile Range in New Mexico. Three hours have been set aside to carry out the test, with the window opening around 9 a.m. EST (7 a.m. MST / 13:00 GMT). NASA posted the following details about the test on their Commercial Crew Program blog earlier today: 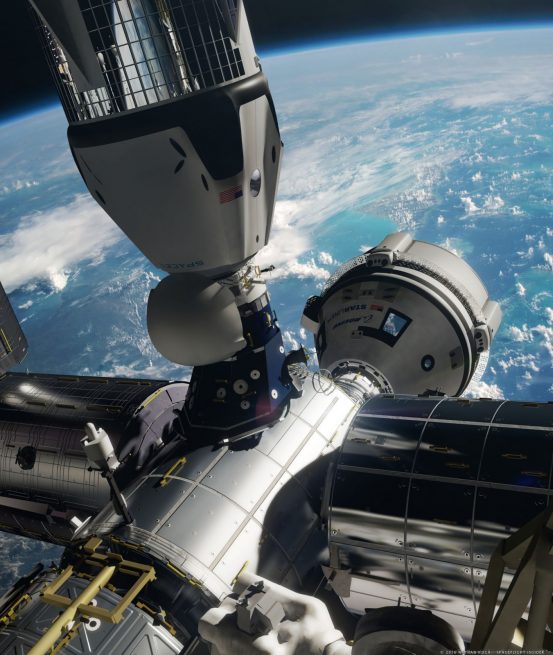 For the demonstration, Starliner and its service module will be resting on the test stand when a zero-zero abort is declared. This means the 16.5-foot vehicle is in the launch position at zero altitude and traveling zero miles an hour. The flight test begins with ignition of Starliner’s four launch abort engines (LAE), pushing the spacecraft away from the stand with a combined 160,000 pounds of thrust. The orbital maneuvering and attitude (OMAC) thrusters kick in simultaneously with LAE ignition to maneuver the spacecraft into the proper orientation for parachute deployment. The vehicle is expected to reach an altitude of about 4,500 feet above the ground, and push about 7,000 feet (about 1 mile) north of the test stand.

The ascent cover and forward heat shield protecting the spacecraft’s parachutes will jettison roughly 19 seconds into flight in preparation for landing. Then, drogue parachutes will deploy, prior to the main parachutes, slowing the descent of the vehicle.

After the parachutes open, the service module will separate from the crew module, followed by the base heat shield. Finally, airbags will inflate, and Starliner will touch down in the New Mexico desert approximately one-and-a-half minutes after the test began. The spacecraft service module, which has a total of 52 engines including those designed to give small directional changes in orbit, is not planned or expected to survive the test.

Boeing’s Pad Abort Test will serve the same purpose as the one SpaceX completed four years ago in 2015. Its crucial that the system work as advertised should something go wrong while the rocket is on the pad. Such an incident took place in 1983 when the Soyuz T-10a crew had to be blasted free of their Soyuz rocket which was then destroyed on the pad.

Meanwhile SpaceX is eyeing Nov. 6 as the date it will carry out an engine abort test for the Crewed Dragon spacecraft at Cape Canaveral in Florida.

NASA has lacked the ability to launch anyone to orbit for almost a decade. The last time astronauts rode to orbit aboard a U.S.-built spacecraft was in July of 2011. Since that time, NASA had been dependent on its Cold War rival, Russia, for access to the International Space Station. NASA has to pony up more than $70 million per seat on Russian Soyuz spacecraft to send astronauts to the space station it built. This situation that has become a black eye for the once-proud U.S. space agency.

SpaceX has been making steady strides in sending crews to the ISS. Having already conducted its first uncrewed test flight, Demo Flight 1 on March 3, 2019. the NewSpace company completed its Test Pad Emergency Egress System in September.

Both company’s have also encountered their fair share of setbacks. Starliner’s abort engines leaked highly-toxic hydrazine during a test in July of 2018 and a test article of SpaceX’s Crewed Dragon exploded on the stand at Kennedy Space Center’s Launch Complex 39A on Apr. 20.

Through its Commercial Crew Program, NASA has invested some $6.8 billion ($4.2 billion to Boeing and $2.6 billion to SpaceX).