Commercial Crew Program: and the winner(s) are… 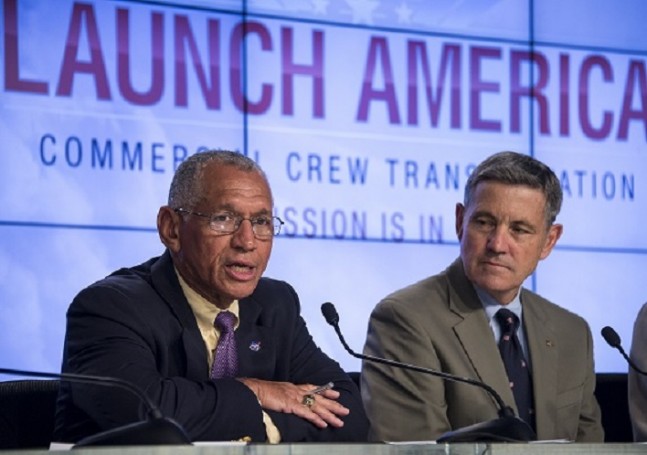 NASA administrator Charlie Bolden stated, “Today we are one step closer to launching our astronauts from U.S. soil on American spacecraft and ending the nation’s sole reliance on Russia by 2017. Turning over low-Earth orbit transportation to private industry will also allow NASA to focus on an even more ambitious mission – sending humans to Mars.” With a goal of launching astronauts from Cape Canaveral in 2017, and ending the country’s reliance on Russia to transport astronauts to and from the ISS, NASA revealed its selection of Boeing’s CST-100 and SpaceX’s Crew Dragon spacecrafts. These two contracts are valued at $4.2 billion to Boeing and $2.6 billion to SpaceX. Included therein will be a minimum of one test flight per company with at least one NASA crew member on board to ensure the spacecraft can launch, rendezvous and dock with the station, remain on orbit to perform system checks, and finally land safely. In addition, the vehicles will also serve as a lifeboat in case of an emergency.

Lueders stressed that the difference in contract amounts is reflective of the respective company’s proposal and does not allude to NASA’s preferences of one over the other.

Once each craft has been certified, they will fly a minimum of two and no more than six missions under this contract. These missions to the space station will permit the station’s current six-member crew to grow, allowing them to conduct more research on the orbiting laboratory. Additionally, these vehicles will be able to return critical experiments to Earth in as little as two hours for further analysis.

Lueders remarked, “We are excited to see our industry partners close in on operational flights to the International Space Station, an extraordinary feat industry and the NASA family began just four years ago. This space agency has long been a technology innovator, and now we also can say we are an American business innovator, spurring job creation and opening up new markets to the private sector. The agency and our partners have many important steps to finish, but we have shown we can do the tough work required and excel in ways few would dare to hope.” NASA astronaut and former ISS Expedition crew member, Mike Fincke said “First we had Mercury, Gemini, Apollo, shuttle and soon Orion. These new commercial crew vehicles show what we as humans can accomplish if we try.”

Low-Earth-orbit (LEO) is a region NASA has been flying to since the early 1960’s and by opening up low-Earth orbit to private companies, the agency can focus on deep space exploration as well as capitalizing on research opportunities on board the space station. Each of the commercial crew partner will own and operate their transportation systems. This will reduce cost for all customers and open the doors to more people experiencing the wonder of space travel.

Following today’s press conference, SpaceX CEO and Chief Designer, Elon Musk said, “SpaceX is deeply honored by the trust NASA has placed in us. We welcome today’s decision and the mission it advances with gratitude and seriousness of purpose. It is a vital step in a journey that will ultimately take us to the stars and make humanity a multi-planet species.” Boeing, vice president and general manager of space exploration, John Elbon, said: “Boeing has been part of every American human space flight program, and we’re honored that NASA has chosen us to continue that legacy. The CST-100 offers NASA the most cost-effective, safe, and innovative solution to U.S.-based access to low-Earth orbit.”

Patti Soloveichik, Boeing space exploration communications officer told Spaceflight Insider, “We’re very please at NASA’s selections, there were a lot of folks who poured their heart and souls into this spacecraft.”

“These two contracts are valued at $4.2 billion to Boeing and $2.6 billion to SpaceX. Included therein will be a minimum of one test flight per company with at least one NASA crew member on board to ensure the spacecraft can launch, rendezvous and dock with the station, remain on orbit to perform system checks, and finally land safely.”

“Once each craft has been certified, they will fly a minimum of two and no more than six missions under this contract.”

What is the total time period of the contract?

The reason for asking is the current commercial crew budget is “only” $0.850 Billion. To absorb $6.8 Billon would require 8 years and to get the vehicles certified by 2017 would almost certainly require a higher level of spending over the next 2 years. Has any of this been discussed with Congress or is this another” just throw it out there and let it sink” operation?

To the best of my knowledge Joe, Congress has signed off on the contract. Right now these are all the details we have as far as the contract is concerned. I’m sure more details, like what the duration of the contract is, will be announced.

Thanks for the reply.

In the past the administration has tried to increase Commercial Crew at the expense of SLS/Orion. The Congress does not agree and everything gets stretched out again for both programs. Just hoping (more like wishing) this is not going to be more of the same.

“The CST-100 offers NASA the most cost-effective, safe, and innovative solution to U.S.-based access to low-Earth orbit.”

The Dragon V2 offers this. CST-100 is a Pork/Jobs vehicle designed to buy off key members of congress. With that said, NASA gets its Apollo style infrastructure(Orion & CST-100) and the support apparatus. Also, it gets a new spacecraft of constant innovation(Dragon V2). I still wish DC could’ve gotten a billion dollars to continue.

Joe Both Boeing & SpaceX said that it would take about a billion dollars to finish development into first flight to station for their respective vehicles. SpaceX will probably only need 5 or 6 hundred million. This is all my opinion. I’m happy to be at this stage. We now know what Apollo would’ve evolved into with Orion & CSt-100 if we had kept producing it.

I will skip the “pork’ and “buy off” comments as they are just the usual SpaceX supporters snark.

The comments that “SpaceX said that it would take about a billion dollars to finish development into first flight to station”, but “SpaceX will probably only need 5 or 6 hundred million” is interesting. If you know better than SpaceX what their costs will be, perhaps you should call Musk and bring him up to speed.