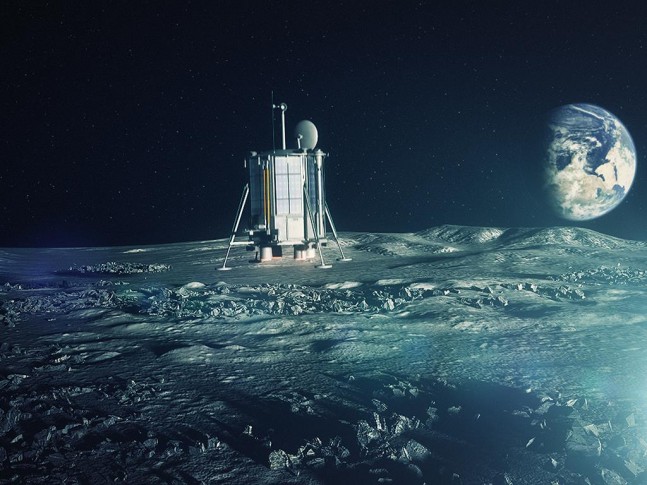 Lunar Missions Ltd. has announced an ambitious plan to send an unmanned robotic lander to the Moon’s South Pole within 10 year’s time.  Lunar Mission One was unveiled during last week’s Reinventing Space 2014 conference held in London. The primary goal of Lunar Mission One is to drill to a depth of at least 66 feet (20 meters) below the lunar surface and possibly as far as 328 feet (100 meters). The probe will also bury a time capsule containing messages, photos and even hair samples from mission backers as part of the mission’s unique fundraising and public outreach strategy.

The initial development phase of the project will be crowdfunded by a Kickstarter campaign, which is already over halfway to its goal of 600,000 pounds (about $900,000).

After the four-week Kickstarter campaign, funds will be received for the next four years through contributions from the public. Individuals can buy digital storage space on the lander for their own test messages, photos or videos.  Donors can also also pay to have their DNA, in the form of a strand of hair, sent to the moon where the project team says it could survive for one billion years. “Anyone in the world will be able to get involved for as little as just a few pounds. Lunar Mission One will make a huge contribution to our understanding of the origins of our planet and the Moon,” said David Iron, founder of Lunar Missions Ltd.

By drilling down to a depth of at least 66 feet below the Moon’s surface, the lander will be able to to access and analyze lunar rock that is 4.5 billion years old. This could give scientists new information on the Moon’s formation and a period of the Moon’s history when it underwent heavy bombardment from asteroids.

Another scientific goal of the mission is to gather data on the suitability of the Moon’s South Pole as a site for a future crewed lunar base.  The lander will measure radiation levels at its landing site and analyze material on the lunar surface which could be potentially used as shielding material for a future base.

The Lunar Mission One lander will be launched into space by a medium class launch vehicle such as a SpaceX Falcon 9 v1,1.

The lander will feature a built-in propulsion system with one or four main engines complemented by several small thrusters to enable a precision descent into a landing site about the size of a football field. Power on the lunar surface will be provided by solar cells fixed to the exterior of the lander.

RAL Space, which has been involved in developing more than 200 hundred space missions and supported NASA and ESA missions, will act as overall technical advisers for the mission. Other partners include University College London (UCL ), the Institute of Education (IOE ), and the Open University (OU ).