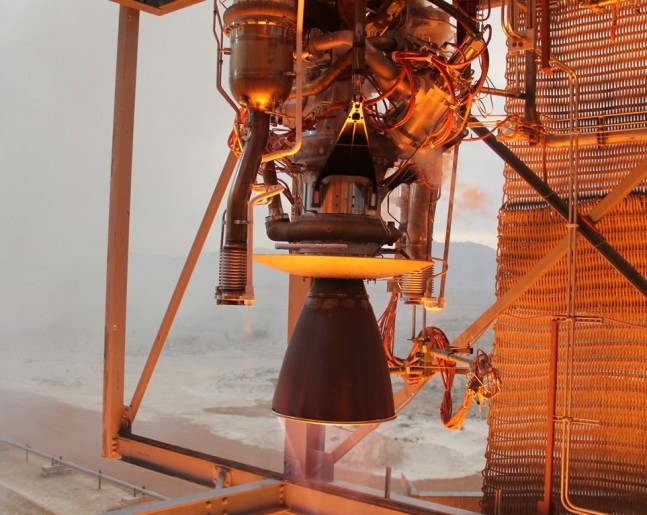 On Tuesday, April 7, Blue Origin announced that the Kent, Washington-based firm has completed acceptance testing of Blue Origin’s BE-3 rocket engine. The engine has now been cleared for suborbital flights and is planned for use on the firm’s New Shepard launch vehicle system. New Shepard is scheduled to carry out suborbital test flights later this year. This milestone marks a turning point for the company, whose efforts have caught the eye of some prominent players within the aerospace industry.

“The BE-3 will gain extensive flight heritage on our New Shepard suborbital system prior to entering service on vehicles carrying humans to low-Earth orbit,” said Blue Origin’s President Rob Meyerson.  “Given its high-performance, low cost, and reusability, the BE-3 is well suited for boost, upper-stage, and in-space applications on both government and commercial launch systems.”

The BE-3 has the ability to be throttled between 110,000-lbf and 20,000-lbf (489.3 kN and 89 kN) of thrust which the company views as an important aspect in terms of the vertical takeoff and vertical landing (VTVL) capabilities of the New Shepard. Initially the BE-3 will be used on Blue Origin’s suborbital systems with plans to modify the engine for upper stage use.

Based on what Blue Origin has described as a “tap-off” design, the BE-3’s turbopumps are powered by main chamber combustion gases – a feature that the company feels makes the engine particularly well suited for crewed spacecraft – such as the New Shepard. The features that make this type of engine attractive for this purpose are its single combustion chamber and shutdown mode.

This is just one among many tests that the rocket engine has undergone. Prior to this latest series of tests, the BE-3’s thrust chamber underwent testing via an agreement with NASA under the space agency’s Commercial Crew Program, which is being carried out to provide access to the International Space Station via commercially-provided spacecraft and launch vehicles. Meyerson noted that his company had three more milestones to complete under the second phase of the Commercial Crew Development  portion of NASA’s initiative.

“The BE-3 is reusable, restartable, and deep throttling, and it is offered at a low cost; it accumulated over 30 thousand seconds of firing time over a series of 450 tests,” Meyerson said. “Our next engine, the BE-4, offers the fastest path to production for a new booster engine for United Launch Alliance – for its new launch system, the NGLS, which will have its new name announced on Monday.”

The testing profile that the BE-3 was placed under included multiple mission duty cycles, deep throttling, and off-nominal test points. The engine is designed and constructed at the aerospace company’s design, development, and production facilities located in Kent, Wash. While constructed in the northwest, the engine was tested in West Texas with combustion chamber testing being carried out at NASA’s Stennis Space Center in Mississippi. All of these reviews are in preparation for the rocket engine to be used on the New Shepard. As noted, the spacecraft’s suborbital flight could be relatively soon.

“We’re not releasing the flight date yet, but it will be later this year; the acceptance testing was the really big hurdle that we had to get over,” Meyerson said.

Blue Origin has described the BE-3 as the first, new liquid hydrogen-fueled rocket engine to be developed since the RS-68 (which was developed more than a decade ago). As denoted by its nomenclature, the BE-3 is the third engine developed by Blue Origin. Meyerson noted that the company tested its first rocket engine in 2005, with the second engine undergoing testing in 2007.

“The BE-3 has now been fired for more than 30,000 seconds over the course of 450 tests,” said Jeff Bezos, Blue Origin’s founder via a press release. “We test, learn, refine, and then test again to push our engines. The Blue Origin team did an outstanding job exploring the corners of what the BE-3 can do and soon we’ll put it to the ultimate test of flight.”

According to Meyerson, the testing performed on the BE-3 required more than 3.3 million U.S. gallons (12.5 megalitres) of liquid hydrogen, or five Olympic swimming pools worth of the propellant. Blue Origin’s founder went on to note the difficulties in utilizing this propellant in conjunction with the BE-3’s systems.

“Liquid hydrogen is challenging, deep throttling is challenging, and reusability is challenging,” said Bezos. “This engine has all three. The rewards are highest performance, vertical landing even with a single-engine vehicle and low cost. And, as a future upper stage engine, hydrogen greatly increases payload capabilities.”

United Launch Alliance (ULA ) has tapped Blue Origin’s BE-4 as their primary choice in terms of rocket engines to power the Colorado-based firm’s new Next Generation Launch System (NGLS) booster to orbit. According to Meyerson, ULA went so far as to design the new booster’s first stage around the engine’s configuration. Meyerson noted that the BE-4 is currently undergoing pre-burner and main injector testing, placing the rocket engine on track to undergo full engine testing in 2016, with complete development of the engine slated to take place in the following year.

According to Blue Origin, the typical flight of the New Shepard spacecraft should last somewhere between 10 and 15 minutes. Customers that fly on the spacecraft would undergo a period of training and familiarization. They in turn would get to experience powered flight, about four minutes of weightlessness, have the ability to view the Earth – before landing via New Shepard’s crew capsule under parachutes.

The company’s efforts have run the gamut since being formed in September of 2000. Meyerson noted the progress his company has made since that time, as well as what can be expected for the first flights of the New Shepard spacecraft.

“When we started Blue, we were unable to find the propulsion that we needed at an affordable price – so we decided to develop our own, and we’ve developed our own team, our own facilities, and our own engines,” Meyerson said. “We’re going to fly dozens of test flights of New Shepard without people on board before we put our test pilots on board.”