Blue Origin to launch from Florida? Maybe – maybe not 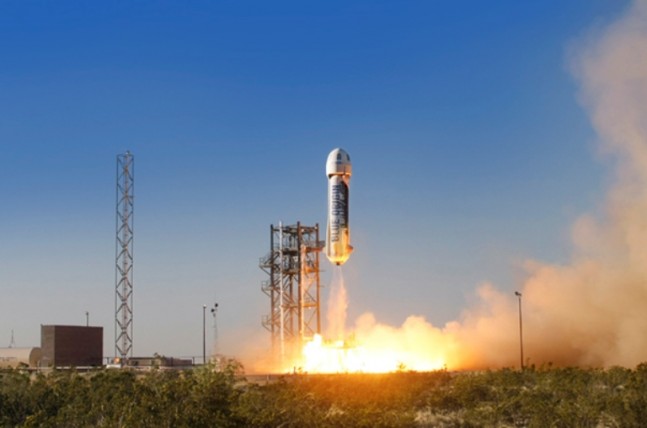 The Manufacturer has noted Blue Origin might build a $220 million launch facility in Florida. Meanwhile, the Daytona Beach Journal has stated Brevard County, the location of NASA’s Kennedy Space Center and Cape Canaveral Air Force Station, has offered $8 million in incentives under a tentative agreement made by the Brevard County commissioners in hopes Blue Origin will tap the Sunshine State as the launch site for New Shepard – the company’s commercially-produced spacecraft. However, will Blue Origin come to Florida?

This push could see Volusia County’s efforts to have the company launch from across the northern border of Brevard – crushed. While the president of CEO Business Alliance, a private group helping to attract economic development to Volusia, is still hoping to land the NewSpace firm.

Despite the fact that Brevard County has provided a catchy “call sign” for its effort, Project Panther, it still might not achieve the goal of expanding the county’s extensive space flight history, however.

Representatives with Blue Origin have noted that while Florida might be the potential launch site, it has not decided which state it will be launching from just yet.

“We are evaluating potential locations for an orbital launch site and can confirm that Florida is one of the states we are considering,” said Jessica Pieczonka, Blue Origin’s head of communications.

Blue Origin’s New Shepard conducted its first suborbital developmental test flight on April 29, 2015, with the craft rising to an altitude of 307,000 feet (93,500 meters) – achieving a top speed of Mach 3. This, however, was just one in a growing number of achievements that the company has accomplished since being founded in September 2000 by Amazon.com founder Jeff Bezos.

Among its various efforts is one which could see a spacecraft, developed by Blue Origin, ferry space tourists to and from suborbital space. This, however, is not the full story.

The firm has also gained the confidence of established aerospace firm United Launch Alliance with the Colorado-based company selecting Blue Origin’s BE-4 rocket engine for use on ULA’s new Next Generation Launch System “Vulcan” rocket.

Maybe Jeff should give Elon a call?
There is a nice little Commercial launch site there that would make a great Spaceport.

Blue Origin tried to relocate to Kennedy a while back. NASA said the launch pad that space x got sole use of was suppose to be a multi-user pad. But Elon raised hell with NASA and got his way and NASA sided with space X. So what it boils down to is, NASA played favoritism to space x and broke their own rule on establishing a mult-user pad.
I’m sure Elon will try to find a way to stop Blue from coming to KSC, he doesn’t want any competition. Besides that, he’d lose his work force to Blue since they treat their people so much better.
No bias here, just stating the facts.

Hehehehe. Riiight. “No bias”…”facts”… Except that your distorted memories and facts aren’t the same thing. :-p

I wasn’t suggesting that they use the same pad.Just the same Range or spaceport. I would think that sharing the same PAD is not a good idea, which is what Jeff was trying to do.
Also wasn’t the reason for SpaceX going to Texas was to get away from all the DoD red tape?

Do you have any proof about Musk not wanting competition? I Recall Jeff was wanting to control the available pad before He was even near having a rocket ready.

Wish Jeff was preparing the other pad 39 instead of SLS 🙂

He’s of course completely wrong (if not intentionally trolling); not only did SpaceX NOT “raise hell with NASA” (never happened) but SpaceX said at the time they’d be happy to share the pad in the extremely unlikely event that, in the the proposed five-year lease period, someone like BO would come up with another launcher that could launch from the pad. (Which won’t happen anyway…)

NASA made the choice for a single occupant based on the probability of who could attract enough launches (New Business) to keep the pad busy and would, therefore, alleviate NASA of ongoing update and maintenance costs which were coming due for the next year. SpaceX already had a fairly full manifest of commercial and NASA missions and a high likelihood they would be launching the Falcon Heavy and Commercial Crew from Pad 39 in the near term. For SpaceX sharing the pad with multiple users would limit their launch rate due to pad turn around time have and added to the issues of dealing with Air Force Launch requirements and the Capes Aging Range equipment. BO, due to their own secrecy, had no visible use for the pad for years to come. Even New Shepard won’t be operational for some time. The thought of using Pad 39 on sub-orbital launches is pretty unrealistic.

You’re of course right, that’s how the decision was made. And it might indeed be a bit problematic for SpaceX to share the pad if they can actually launch as frequently as they hope for in the next few years. Having said that, I believe SpaceX people were sincere when they said they would be happy with sharing it – it simply seemed like a calculated risk statement to me. (As in, daring them along the lines of “sure, if you can can ACTUALLY LAUNCH something, we’d really like to see THAT” while expecting the risk of that happening being small.)

It never ceases to amaze me how the spacex groupies will attack anyone who they even think may be promoting anyone other than spacex and accuse them of being a troll, when actually they are the trolls trying to demonize anyone whom they think is remotely anti space x. The fact is, NASA does play favoritism to space x, and the other companies know that.

I didn’t attack you for being “anti-SpaceX” or “pro-non-SpaceX”. I attacked you for spreading weapons-grade BS and such lies as “NASA said the launch pad that space x got sole use of was suppose to be a multi-user pad” or “Elon raised hell with NASA and got his way” or “NASA played favoritism to space x” or “NASA broke their own rule”, for NONE of which you have ANY evidence whatsoever.

Here’s some reality check for your distorted memories of events that you made up:

NASA did in fact designate the pad as a Multi-user pad and then went against their own plan in favor of what Spacex wanted regardless of the reasoning behind it.
And the fact is; Blue is coming to Florida to launch no matter what Elon wants and it’s also a fact that Blue is the much more desirable company to work for, they just treat their employees better, I know, I know several people who work for both companies.

Where’s your evidence for the claim that NASA “designated the pad as a multi-user pad”? From what I can tell, they did no such thing. They’ve simply asked for bids proposing what to do with it, and SpaceX sent an exclusive bid, based on their optimistic plans. BO then sent a non-exclusive bid, and preventatively “raised hell with the GAO” (to paraphrase your own words) to prevent the pad from being awarded to SpaceX – BEFORE any actual decision was made by NASA. NASA had no interest in the pad being either shared or non-shared, they simply wanted to get rid of it for the time being. And the GAO sided with NASA anyway.

BTW, Tom, why do you call yourself “Jesse” now? It’s confusing. 😉

The pad was designated as a multi-user pad after the shuttle program, I know, since I work in the industry. Just don’t understand why people won’t accept facts, do you have any evidence it was never designated as such ?

Yes, I have – GAO says in extremely clear terms that this is what BO claimed, not what NASA stipulated!

In the final analysis, we agree with the agency that the AFP contemplates two possible approaches, but includes no preference for one approach versus another. The approaches are different—and require the presentation of different information to substantiate the plan being offered—but there currently is nothing in the record beyond the protester’s arguments to show that either approach necessarily is better in terms of meeting the agency’s objective of achieving the fullest commercial use of space.”

To sum it up, NASA DIDN’T express any preferences, SpaceX DIDN’T “raise hell” about anything, it was Blue Origin who did – preventatively to boot, even before there was any hint of any possible decision on part of NASA! – although they didn’t “raise hell” with NASA but with the GAO, and GAO sided with NASA in that if NASA thought that SpaceX exclusive bid was deemed a better proposal for future use of the LC-39A, there was nothing wrong about granting it.

If you indeed “work in the industry”, you’re either HORRIBLY misinformed, or an intentional troll, since all your claims can be easily obliterated with a ten-minute search for reputable sources.

I also love NASA’s jab about “flux capacitors and warp drives” with regards to BO’s ridiculous claims made in their complaints to the GAO.

OIG Report dated 10-23-2014 indicates early initial talk of a multi-user pad 39A. This report also shines light on perceived favoritism that may or may not have happened and cannot be proven. But many on the inside of the gate knows it goes on.

“But many on the inside of the gate knows it goes on.”

Gath Gealaich who is on many blogs criticizing many peoples comments.