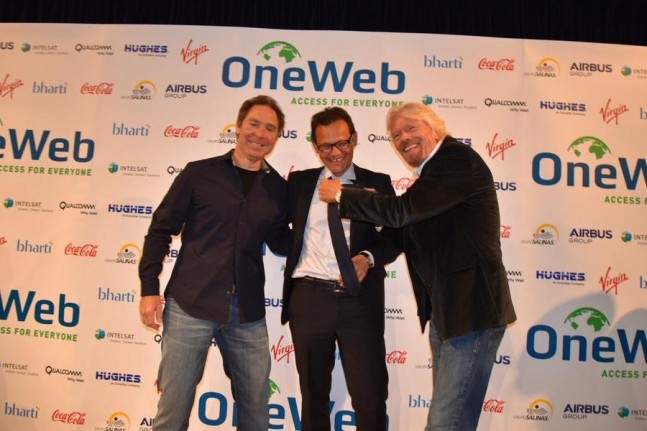 OneWeb, a UK company building a new global satellite-based internet network could become the driving force of future big commercial rocket launches that would boost space industry growth in many countries. Last week’s deal signed by OneWeb and aerospace giants Arianespace and Virgin Galactic stand to be one of the largest commercial launch contracts in history.

The British company inked the deal on June 25 – it has been estimated at being worth more than $1 billion. Under this agreement, some 65 launches are scheduled to deliver 900 microsatellites each weighing up to 330 lbs. (150 kg), into orbit. Twenty-one launches will be performed by Arianespace using the Russian Soyuz rocket with an additional 39 launches provided by Virgin Galactic’s LauncherOne. Artist’s rendition of a OneWeb’s satellite to be built by Airbus. Image Credit: Airbus

All of these flights are slated to take place between 2017 and 2019. The agreement has an option for at least five additional Soyuz missions after 2020, and three Ariane 6 launches.

“The dream of fully bridging the digital divide is on track to be a reality in 2019,” said Greg Wyler, founder of OneWeb. “Together with our committed and visionary founding shareholders we have the key elements in place: regulatory, technology, launches, satellites, as well as commercial operators in over 50 countries and territories.”

The contract was hailed as the largest commercial launch purchase in history. It beats an agreement that SpaceX signed with Iridium in 2010 valued at nearly $500 million.

“The contract is going to be the biggest in the history of providing launching services,” said Igor Komarov, the Russian Federal Space Agency (Roscosmos) Chief.

Besides Arianespace and Virgin Galactic, the contract also includes other aerospace companies such as Airbus and Intelsat. They will design, build, and collaborate on operating the fleet of satellites. “We’re very excited to be part of OneWeb’s endeavor to provide global Internet access for everybody, everywhere. We are committed to giving our full industrial and space expertise to this mission,” said Tom Enders, CEO of Airbus Group.

OneWeb satellites will be launched into a near polar orbit at an altitude of about 310 miles (500 km) before raising themselves to their operational orbit.

Fifteen launches will be performed at the Baikonur Cosmodrome in Kazakhstan. The launch schedule also includes Plesetsk and Vostochny Cosmodromes as well as Europe’s Kourou Spaceport located in French Guiana.

Virgin Galactic will fulfill its part of the contract using its LauncherOne launch vehicle which is specially designed to deploy small satellites. The rocket, still in development, will employ the company’s WhiteKnightTwo aircraft to lift it off the ground. WhiteKnightTwo will carry LauncherOne to an altitude of approximately 45,000 to 50,000 feet, where it will be released, briefly free-falling before the first stage’s engine ignites. The company plans to perform most of the launches from Spaceport America in New Mexico. “Our vision is to make the Internet affordable for everyone, connecting remote areas to rest of the world and helping to raise living standards and prosperity in some of the poorest regions today,” said Richard Branson, founder of the Virgin Galactic. “We believe that OneWeb, together with Virgin Galactic’s LauncherOne satellite launch system, has the capability to make this a reality.”

In addition to the commitment for 39 satellite launches, the agreement with Virgin Galactic also gives OneWeb options for an additional 100 flights.

The optional Ariane 6 launches to be provided by Arianespace will be available to OneWeb starting as early as 2021 to support the replenishment of the constellation and to allow the transition to the next generation of the OneWeb constellation.

OneWeb’s plans to build a communications network with a constellation of low-Earth orbit Ku-band satellites that will provide connectivity to billions of people around the world. With more than 10 terabits per second of new capacity, the network is being designed to serve new coverage areas, bringing voice and data access to consumers, businesses, schools, healthcare institutions, and other users.

“We consider it a great honor to play such an important role in the deployment of this innovative constellation,” said Stéphane Israël, Chairman and CEO of Arianespace. “First, the trust placed by OneWeb in Arianespace is simply exceptional, considering the scope of the contract and the stakes it entails. Second, the goal of this constellation, which is to provide mankind with global connectivity everywhere on the planet, is fully in line with one of our main values: bring space down to Earth for the benefit of all.”

OneWeb aims to beam Wi-Fi and mobile data service around the world by 2019. When fully deployed, the company’s constellation of satellites will be the largest satellite constellation in orbit.

Additionally, Virgin Galactic has (again) announced it will have a fleet of commercial spacecraft ready for passengers in one year. Similar announcements have been made every year for the last decade. However, Branson assured the audience “This time I really, really mean it! Honest!”