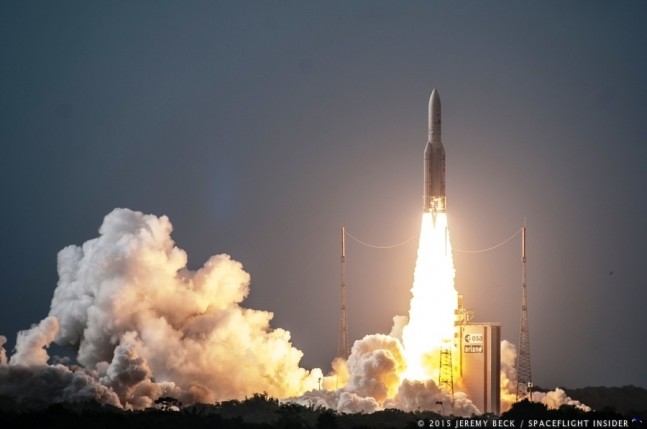 On Sunday, April 26, at 4:00 p.m. EDT (5 p.m. GFT, 20:00 GMT), an Ariane 5 ECA rocket roared off the launch pad and into the skies above Kourou, French Guiana. This particular flight, designated VA-222, was Scheduled for an April 15 launch, but was delayed to April 24 when an anomaly was identified on a fluid connector that links the Ariane 5’s cryogenic upper stage to the mobile launch table.  The decision was made to replace the part and perform the subsequent verifications.

On April 23 the Ariane-5 with its two satellites was rolled out to the launch zone at Europe’s Spaceport. During the final countdown operations, a few hours before launch, an anomaly involving environmental control equipment for the launcher occurred resulting in a scrub. This resulted in the decision to transfer the Ariane 5 from its launch pad back to the Final Assembly Building. The repair work was done fast and the whole stack was rolled back to the launch zone on April 25, and by that time Arianespace had cleared the mission for launch a day later, and earlier today successfully launched the THOR 7 and SCIRAL 2 satellites into their respective geostationary orbits. The Ariane 5 passes by theMoon on its way to orbit. Photo Credit: Jeremy Beck / SpaceFlight Insider

The launch came later than the planned 3:37 p.m. EDT (4:37 p.m. GFT, 19:37 GMT) liftoff time due to poor weather conditions in the region. As the commentator on Arianespace’s live video stream put it: “They don’t call it a rain forest for nothing!”

The satellites, operated by Telenor and Telespazio respectively, rode into orbit stacked atop one another inside the rocket’s SYstème de Lancement Double Ariane (SYLDA) payload carrier.

The massive 173-foot-tall (53 meter) rocket was rolled out to the Ensemble de Lancement Ariane 3, or ELA3, on Thursday, April 23, and promptly fitted to the various communication arrays, sensors, and fuel pumps at the pad. This launch site is specially outfitted to launch the Ariane 5 family of rockets and is where the final stage of launch preparations took place. Here, the rocket’s main cryogenic stage had its tanks filled with 175-tonnes of propellant – 150 t of liquid oxygen and 25 t of liquid hydrogen – on the day of launch. (1 tonne ≈ 2,200 pounds.) Today’s flight was delayed at least twice due to an issue with a fluid connector between the cryogenic upper stage of the rocket and the launch table itself. Photo Credit: Arianespace

The Ariane 5 is two-stage booster, comprised of the Etage Principal Cryotechnique (EPC) – Cryotechnic Main Stage – which is powered by a Vulcain 2 rocket engine, and two Étages d’Accélération à Poudre (EAP ) solid rocket boosters. The two EAPs are capable of producing a total of 2.43 million pounds-force (10.8 MN) of thrust – 92 percent of the thrust required to carry out the mission. The upper stage of the rocket is comprised of the Etage Superieur Cryotechnique  (ESC) – Cryogenic Upper Stage – powered by an Aestus rocket engine which is capable of being restarted. The upper stage also houses the Vehicle Equipment Bay (VEB) which carries the two satellites in the SYLDA payload carrier.

At 4:00 p.m. EDT (5:00 p.m. GFT, 20:00 GMT), the countdown reached T-0 with the Vulcain 2 engine, named after the Roman god of fire, roaring to life, putting out over 300,000 pounds-force (1,359 kN) of thrust. Approximately seven seconds after ignition of the main engine, the onboard computers, sensing that all is well with the Vulcain 2, sent the activation command to the two EAP solid rocket boosters – bringing them to life and lifting the rocket off the pad and into the skies above the Amazon.

With the clouds that covered the region, the Ariane 5 quickly disappeared from sight.

Twelve seconds into the mission, the Ariane 5 began to roll into the correct flight path to take it on the correct trajectory out of the atmosphere and into orbit. Just visible in this image are the two EAPS boosters falling away from the Ariane 5. Photo Credit: Jeremy Beck / SpaceFlight Insider

After about two minutes of powered flight, the two EAP solid rocket boosters separated from the main stage, shedding 1.21 million pounds (550 tonnes) of the total weight of the Ariane 5.

Three minutes into the flight and the rocket, most of the way out of Earth’s atmosphere, jettisoned the protective fairing, shedding an additional 4,000 pounds (1,800 kg) off of the main stage. After about 8 minutes of flight at 4:08 pm EDT (20:08 GMT), the Vulcain 2 engine was shut down and the ETC main stage was separated from the ESC upper stage. A minute later and the ESC’s Aestus engine came to life, marking the final stage of the mission as the ESC brought its payload closer to Geostationary Transfer Orbit (GTO).

After approximately twenty-eight minutes into the flight, the THOR 7 satellite will be released from the SYLDA and placed into GTO at 0.8° West. Six minutes after that and the SCIRAL 2 satellite will separate from the SYLDA when it reaches its own operational orbit, marking the end of a successful mission for Arianespace.

This was the first Ariane 5 launch of 2015 and there are three more Ariane 5 missions scheduled for this year, with the next launch to take off on May 20 to deliver the DirecTV and SKY MEXICO-1 (SKYM-1) satellites into orbit. The THOR 7 is operated by Norwegian Telenor Satellite Broadcasting (TSBc) and will provide television broadcasting services to central and eastern Europe as well as providing broadband communications for the maritime industry. The THOR 7 was built by California-based Space Systems/Loral (SSL) and uses an LS-1300 platform, and is outfitted with 21 active Ku-band transponders and 25 Ka band transponders. It is expected to remain in operation for 15 years.

“The satellite built by SSL will deliver a very bandwidth efficient and flexible service for major shipping routes and recreational vessels,” said Morten Tengs, Vice President and CEO of Telenor Satellite Broadcasting. “With the launch of THOR 7, our growth satellite, we look forward to further extending our position in the market and expanding our European coverage.” The SICRAL 2 satellite is a joint Italian and French military telecommunications satellite built by Italian company Thales Alenia Space (TAS) in conjunction with Telespazio. The satellite uses a Spacebus 4000 B3 platform and is fitted with UHF and SHF band transponders. SCIRAL 2 will provide strategic and tactical communications for the French and Italian militaries as well as providing reserve telecommunications capacity for NATO. It is also expected to remain in operation for 15 years.

“Sicral 2 is the 36th military payload to have chosen an Ariane launch,” said the Chairman and CEO of Arianespace at the time the agreement to fly Sicral 2 on an Ariane 5 booster was signed in 2010, Jean-Yves Le Gall. “This latest contract clearly illustrates the strategic facet of Ariane 5, which guarantees independent access to space for all European governments. The Ariane 5 launcher is one of the keys to the development of a common European security policy, since it plays a pivotal role in the indispensable space segment.”