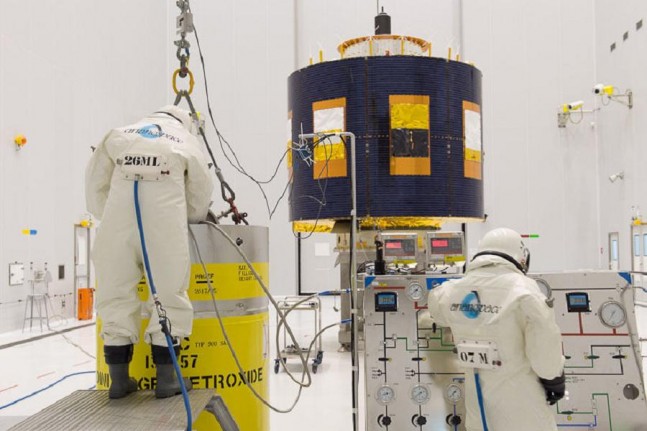 Arianespace is ready to begin its 224th mission by launching two satellites atop the company’s Ariane 5 rocket. Lift-off is currently scheduled to take place on Wednesday, July 15, from the Kourou Spaceport located in Kourou, French Guiana, during a 37-minute launch window that opens at 6:42 p.m. local time (5:42 p.m. EDT; 21:42 GMT).

After the planned 40-min. flight sequence, the rocket will deliver a Brazilian communications satellite Star One C4 and a European weather satellite MSG-4 into a geostationary transfer orbit (GTO). The launcher will be carrying a total payload of about 8.6 metric tons.

The satellites were encapsulated into the payload fairing on July 7. Three days later, the Launch Readiness Review was completed. The rocket was rolled out for the lift-off on July 13, moving on its mobile launch table from the Final Assembly Building – where payload integration occurred – to the Spaceport’s dedicated ELA-3 launch complex. The heavy-lift Ariane 5 for Arianespace Flight VA224 is transferred to the ELA-3 launch zone at the Spaceport for its July 15 mission with Star One C4 and MSG-4. Photo Credit: ESA/CNES/Arianespace

Star One C4, designed and built by Space Systems Loral (SSL) for the private Brazilian operator Embratel Star One, will be located at 70 degrees West longitude, which is the most important one for the Broadcasters market in Brazil. This is considered a “hot” position for transmitting signals of major TV stations in Brazil and for having 22-25 million parabolic antennas pointed in that direction.

The Wednesday launch of Star One C4 will be the 50th SSL mission with Arianespace.

“Embratel Star One and SSL share a commitment to improving Latin America’s communications infrastructure and providing exceptional service,” said John Celli, president of SSL. “Star One C4, which is an advanced and powerful satellite, also has special significance to SSL as our 50th mission with Arianespace.”

Star One C4 will ensure the continuity of telephone, television, radio, data transmission and Internet services in Brazil, in addition to expanding these services to Latin American countries and mainland United States.

“The new satellite will reinforce our DTH services in Brazil while expanding access to other Latin American countries and to the mainland United States,” said Gustavo Silbert, President of Embratel Star One.

Embratel Star One is the largest satellite operator in Latin America. Founded in December 2000 as a subsidiary from Embratel, Embratel Star One has a fleet of seven satellites. It operates four GEO satellites (Star One C1, C2, C3, and BRASILSAT B4), and two in inclined orbit (BRASILSAT B2 and B3), with a main ground station located in Guaratiba (Rio de Janeiro – Brazil). The Star One C4 together with the C1, C2, C3, and C12 are part of the third generation of satellites now.

The mission’s second passenger, the fourth Meteosat Second Generation (MSG-4) satellite, built by Thales Alenia Space using an MSG FM4 platform, is designed to help detect and forecast rapidly developing high impact weather, such as thunderstorms or fog. Nowcasting and very short range forecasts — up to six hours — are vital for the safety of life, property, and infrastructure and rely on very frequent, detailed images of the atmosphere.

The rapid 15 minute, or even five minute, image updates from Meteosat satellites are an important tool for meteorologists to monitor the often rapid development of convective storms and help them issue timely warnings. MSG satellites can also detect ash in the atmosphere. Because of this capability, the satellites are the primary satellites used for monitoring volcanic ash plumes.

MSG-4 is the last of the MSG satellites resulting from the cooperation between the European Organisation for the Exploitation of Meteorological Satellites (EUMETSAT) and the European Space Agency (ESA). All MSG satellites are manufactured by a European industry consortium led by Thales Alenia Space (TAS). “This contract was awarded many years ago; it was following the first generation of Meteosat contracts also under prime contractorship of TAS. The company has more than 30 years of expertise and is a worldwide leader for meteorology from the geostationary orbit,” Sandrine Bielecki, the Head of Media Relations at Thales Alenia Space, told SpaceFlight Insider.

Weighing 2 metric tons, the MSG-4 is the 142nd satellite built by Thales Alenia Space to be launched by Arianespace. The satellite is scheduled to separate from the rocket 40 minutes and 19 seconds after lift-off.

MSG-4 will be stored in orbit after launch and commissioning. As Meteosat-11, it will ultimately bridge the gap between Meteosat-10 (launched in 2012) and the first Meteosat Third Generation (MTG) satellites, expected to be launched in 2019 and 2021. MGS-4 is planned to be in service for 7 years.

“I am very proud to be part of such a complex activity which has allowed the development of an excellent team spirit among the several teams involved,” said Paolo Pili, Meteosat Spacecraft Operations Manager. “I also have to say that I am more emotional about the MSG-4 launch than any other MSG launch beforehand. MSG-4 is, indeed, the last of the MSG series and I have seen all of them, from MSG-1 onwards.”

Star One C4 and MSG‑4 will be the 511th and 512th satellites to be launched by Arianespace.

Ariane 5 in ECA configuration that will be used in the upcoming launch is the heavy-lift rocket for missions to GTO and usually carries two telecommunications satellite payloads. It is powered during the initial flight phase by a cryogenic core stage and two solid rocket boosters, followed by the use of a cryogenic upper stage for orbital injection of the payload.

The 180 ft. (54.8 m) tall ECA is an improved version of the Ariane 5 launcher, designed to deliver payloads, mainly communications satellites, weighing up to 10 metric tons. Although it has the same general architecture, a number of major changes were made to the basic structure of the generic version to increase thrust and enable it to carry heavier payloads.

Wednesday’s launch will be the 80th for the Ariane 5 rocket.

I suggest that you use some consistent time standard, like Eastern Time or anything. The Ariane 5 launch today is referred to with “GFT – French Guiana Time” according to Wikipedia. I’ve never heard of it. It is not a convenient time standard for non-Brazilians. And I think you are doing a great job keeping us updated about this stuff. I just want to nitpick on a detail, hope you don’t mind.