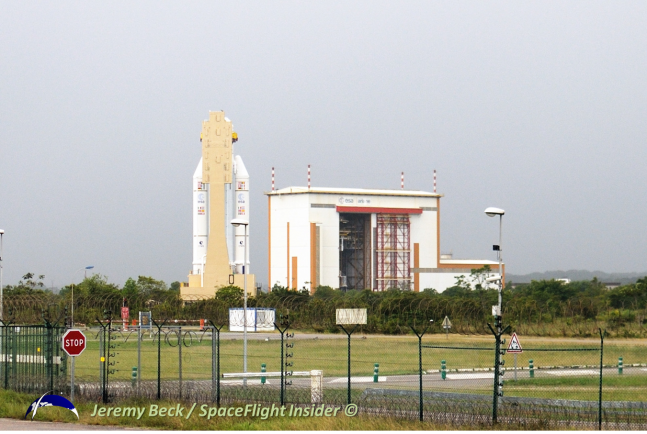 Arianespace is moving forward with plans to launch one of the firm’s Ariane 5 ECA boosters, designated VA217 from Kourou, French Guiana on Thursday, February 6 at 3:30 p.m. EST (2030 GMT). The payload for tomorrow’s launch is duet, with the ABS-2 and Athena-Fidus satellites sharing the ride aloft. A “headless” Ariane 5 ECA booster is rolled out to the pad at French Guiana in preparation for the ABS 2 / Athena-Fidus mission. Photo Credit: Jeremy Beck / SpaceFlight Insider

A launch readiness review has cleared the heavy-lift rocket for launch. The team has cleared not only the launch vehicle itself, but the payload, launch support system and the downrange tracking stations which will support tomorrow’s launch as well.

The rocket was rolled out to the launch pad earlier today from Spaceport’s Final Assembly Building to the ELA-3 launch zone. If things don’t go according to plan at the outside of the window, the launch team has 2 hours and 5 minutes in which to get the rocket off of the pad.

Each of the spacecraft on board the Ariane 5 will serve as advanced relay platforms.

This marks the first launch of the year for the Ariane 5, which is described as having the capacity to lift an estimated 22,462 lbs (10,210 kg) to orbit. The two satellites along with the launcher’s SYLDA dual-passenger dispenser system (which allows more than one spacecraft to utilize the Ariane 5 launcher) weigh approximately 20, 702 lbs (9,410 kg).

Athena-Fidus was built by Thales Alenia Space for the French and Italian Space Agencies (CNES and ASI respectively). According to Arianespace, the spacecraft will also provide data transmission services to the French DGA and  Italian Segredifesa defense ministry organizations.