Aerojet Rocketdyne to provide propulsion subsystems for A2100 satellites 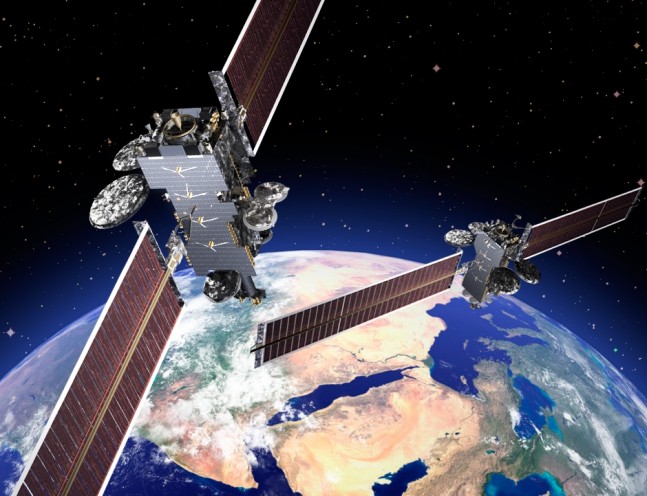 At least two of the modernized versions of Lockheed Martin’s A2100 satellites will fly using XR‑5 Hall Effect and MR‑510 Arcjet electric propulsion subsystems. The spacecraft will use these new systems thanks, in part, to a contract awarded to Aerojet Rocketdyne, the manufacturer of these systems. The agreement calls for Aerojet Rocketdyne to deliver flight propulsion subsystems aboard two A2100 satellites that Arabsat has ordered from Lockheed Martin. This contract is just the latest in a long series of collaborations that can be traced back some 40 years.

AR will provide XR‑5 Hall Effect and MR‑510 Arcjet electric propulsion subsystems for these two spacecraft, as well as monopropellant rocket engines for the modernized A2100 satellites.

Lockheed Martin and Aerojet Rocketdyne have worked on space-related projects for quite some time. Partnerships between the two began with the launch of Satcom 1 on December 12, 1975. The Satcom 1 spacecraft was launched atop a Delta 3000 from Cape Canaveral Air Force Station’s Space Launch Complex 17A in Florida.

Since that time, the two aerospace companies have continued their collaboration, producing more than 100 Lockheed Martin GEO Comsats with more than 1,500 Aerojet Rocketdyne-built chemical and electric propulsion rocket engines on board.

Information obtained from Aerojet Rocketdyne details how the XR‑5 Hall system is the only flight-proven high-power Hall Thruster system in the world, significantly expands the capability of the A2100 platform due to its unique combination of high-performance and high-qualified total impulse. Twelve XR‑5 Hall Thrusters have now flown aboard three Advanced Extremely High-Frequency satellites that have demonstrated full orbit-raising as well as a cumulative seven years of station-keeping operation.

“Hellas-Sat-4/SaudiGeoSat-1 will include a hybrid electric propulsion system that will use flight-proven Hall Current Thrusters, which produce greater thrust and allow larger payloads. Arabsat 6A will have a chemical propulsion system,” Lockheed Martin’s Jill Krugman told SpaceFlight Insider.

The two satellites were ordered by Arabsat and are meant to strengthen the Arabsat fleet, bringing the constellation up to 10 spacecraft. These satellites provide mass communications services including television, internet, telephone, and secure communications to customers in the Middle East, Africa, and Europe. Lockheed Martin signed the agreement on April 9 of this year (2015) and has already started producing the spacecraft for planned launches in 2018.

Arabsat and King Abdulaziz City for Science and Technology (KACST) announced on April 28 of this year that Lockheed Martin will produce two A2100 communications satellites.

“Arabsat 6A and Hellas-Sat-4/SaudiGeoSat-1 will join a fleet of satellites that provides millions of people access to TV, radio, and broadband services for mobile and landline communications,” said Khalid Balkheyour, CEO of Arabsat. “We selected Lockheed Martin to build these satellites due to the impressive technical capabilities and proven track record of the A2100 satellite.”

In conjunction with being awarded this contract, Lockheed Martin, KACST, and TAQNIA Space Company, a subsidiary of the Saudi Technology Investment and Development Company (TAQNIA), also entered into an agreement that would work to design, manufacture, assemble, and integrate satellites in Saudi Arabia.

“We believe this partnership will serve as a platform for commercialization of innovations in future satellite systems in the Middle East and North Africa region,” said Abdullah Alosaimi, “This is a great step forward to support both Arabsat and the Kingdom’s long-term strategy to provide consumers and commercial customers with robust communications resources,” said Mike Hamel, vice president and general manager of Commercial Space at Lockheed Martin. “The modernized A2100 satellite platform is ideally suited to their mission of connecting people and societies through reliable telecommunications services.”

In terms of accumulated time, the A2100 satellites have more than 450 years operational time on orbit. The modernized versions of these spacecraft include improved propulsion, solar arrays, and electronics. Arabsat 6A will be positioned at 30.5 degrees East and Hellas-Sat-4/SaudiGeoSat-1 will be placed at 39 degrees East. These spacecraft are designed to last at least 15 years.