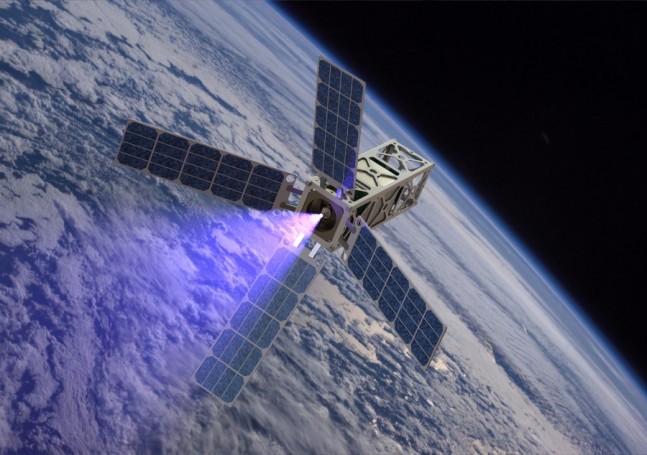 ) was put through its paces via a hot-fire test carried out by California-based Aerojet Rocketdyne. This particular engine design is a hydrazine-integrated propulsion system for use on small CubeSats and could open up missions that were previously unavailable to the tiny spacecraft. Funded by the NASA Office of Chief Technologist’s Game Changing Opportunities in Technology Development and awarded out of NASA’s Armstrong Flight Research Center also in California. The test itself was carried out in Redmond, Washington.

Four small rocket engines and the elements of the feed systems that keep them supplied with propellant were only parts of a larger equation. There also were propellant and pressurant tanks as well as a 3D-printed titanium piston. The engines have been designed to use both the highly-toxic hydrazine – as well as the so-called “green” AF-M315E propellant. Engines can be changed out so as to upgrade to the MPS-130 “green” propellant version.

“The MPS-120 hot-fire test is a significant milestone in demonstrating our game-changing propulsion solution, which will make many new CubeSat missions possible,” said Christian Carpenter, MPS-120 program manager. “We look forward to identifying customers to demonstrate the technology on an inaugural space flight.”

The system is very small, with a description of it stating that it can fit into a chassis – about the size of a coffee cup. During the hot-fire test, the MPS-120 displayed more than five times the required throughput as well as several discharges on the propellant tank. According to the engine’s manufacturer, with the completion of this hot-fire, the system has reached Technology Readiness Level 6 and a Manufacturing Readiness Level 6.

“Aerojet Rocketdyne continues to push the envelope with both the development and application of 3-D printed technologies, and this successful test opens a new paradigm of possibilities that is not constrained by the limits of traditional manufacturing techniques,” said Aerojet Rocketdyne’s Vice President of  Space Advanced Programs Julie Van Kleeck in a press release.

With the test fire complete, the next steps will be to qualify the engine – and then to have it fly an actual mission into space.

The use of 3D printing, or Additive Manufacturing (AM), has been increasingly used by aerospace companies as it lessens complexity, production times and in so doing – lowers the cost to send payloads to orbit.

“Demonstrating the speed at which we can manufacture, assemble and test a system like this is a testament to the impact that proper infusion of additive manufacturing and focused teamwork can have on a product,” said Ethan Lorimor a project engineer working on the MPS-120. “The demonstration proved that the system could be manufactured quickly, with the 3D printing taking only one week and system assembly taking only two days.”

This is not the first 3D-printed rocket engine or components to be tested out – or flown. The following are just some of components that have either been tested or flown to date:

Falcon 9 rocket with a 3D-printed Main Oxidizer Valve (MOV) body in one of the nine Merlin 1D engines – Jan. 2014.