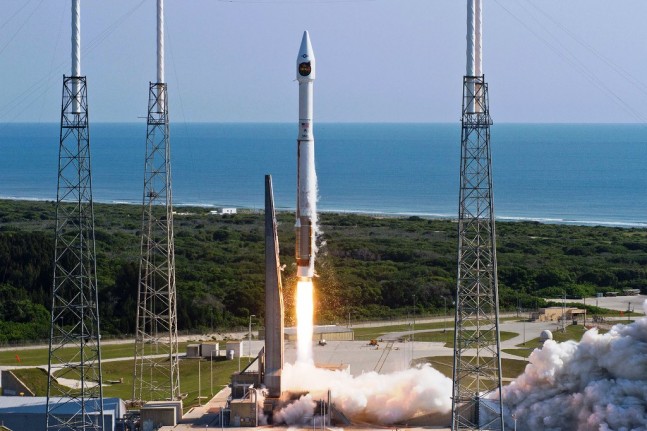 CAPE CANAVERAL, Fla — The NROL-33 mission successfully launched into orbit at 9:09 EDT (1309 GMT) this morning on an Atlas V rocket from Space Launch Complex (SLC) 41. The skies were clear over Cape Canaveral Air Force Station, and with no chance of a weather delay, the morning went about as smoothly as possible. Moreover, it marked the fourth launch carried out by the Colorado-based firm – in just seven weeks.

Mission control did have a planned 10-minute hold at T-4 minutes for the purpose of COLA, or collision avoidance, to reduce the probability of the rocket getting too close to anything already in orbit. No word was given on what they were concerned about hitting, however. This morning’s launch was delayed by four minutes due to a collision avoidance. Photo Credit: Mike Howard / SpaceFlight Insider

Once the hold ended, countdown proceeded nominally, and at T-2.7 seconds the main engine on the Common Core Booster roared to life. It’s an RD-180, and produces 860,000 pounds of thrust at liftoff.

This was the 46th launch of the Atlas V, and the 22nd launch of its 401 configuration, since its maiden voyage in 2002. The “401″ designation indicates that the rocket has a 4-meter payload fairing, no solid rocket boosters on the base of the rocket, and one engine on the Centaur, its upper stage. The Centaur boosts the payload satellite to geosynchronous orbit.

At 9:09:01 EDT, the rocket lifted off as planned. It reached MACH 1 at 9:10:25, breaking the sound barrier, and Max Q at 9:10:30, or Maximum Dynamic Pressure, where the airframe experiences the maximum mechanical stress. The RD-180 was, as usual, throttled back temporarily to ensure the vehicle would make it through Max Q.

At about four minutes into flight, the booster engine was cut off, and six seconds later the booster stage was jettisoned.

“Aerojet Rocketdyne is proud to deliver this critical payload to orbit,” said Aerojet Rocketdyne’s Vice President of Space Launch Systems. “We understand the importance these missions play in our national security, and we are honored our customers selected us to provide the safest, most dependable propulsion systems on the market.”

Then the Centaur stage’s main engine, an RL10A, ignited. The RL10A, manufactured by Pratt & Whitney Rocketdyne, has a thrust of about 23,000 pounds and carried the Centaur for eight seconds before the payload fairing was jettisoned. With confirmation of a successful jettison, the live webcast ended due to the secrecy of the payload.

It is business as usual for the National Reconnaissance Office (NRO) to keep their payload satellites classified, at least for a couple of decades, but there has been plenty of speculation about the nature of this one, with many going so far as to infer facts from the mission patch. The popular guess is that NROL-33 will join the Satellite Data System (SDS) constellation of U.S. military communication satellites. Also known as Quasar satellites, they are used to transfer data to ground stations from other NRO satellites. Like most speculations, of course, this claim remains unverified.

The payload mission patch features three wolves and a winged warrior woman, who carries a sword in one hand and emits lasers or other light beams from her other palm. Observers believe the three wolves represent the three newest Quasar satellites, and that the five light beams coming from the woman’s hand represent the five previous satellites in the group. The patch also includes a setting sun, which may indicate that NROL-33 is the last SDS satellite of the current generation. The launch patch, which is different, depicts a flying squirrel over the Europe area of the globe and the motto “Defendi nostrae opes,” a Latin phrase that means “to defend our resources.”

NRO’s patches have a history of being scrutinized by the public, and the office received some notoriety for its octopus-seizing-the-world NROL-39 patch in December 2013. ULA carried out this launch a mere six days after sending the GPS IIF-6 satellite to orbit atop a Delta IV Medium rocket. Photo Credit: ULA

The NRO is a U.S. intelligence agency that develops and operates space reconnaissance systems, often called “spy satellites,” to collect data for U.S. military and intelligence applications. The data can also be used for purposes like supporting international peacekeeping and assessing the damage done by natural disasters. NRO’s customers and mission partners include, but are not limited to, the Armed Services, policy makers, various intelligence agencies, several state departments, and civil agencies. The office was formed in 1961 and its existence was not officially declassified until 1992, though press reports about it began as early as 1971.

United Launch Alliance (ULA) has performed a number of launches for the NRO, and this morning’s success was the 83rd launch for ULA since Lockheed Martin and Boeing formed the partnership in 2006.

ULA has been at the heart of recent controversy over allegations from Space Exploration Technologies (SpaceX) regarding a no-bid contract with the U.S. Air Force. SpaceX sued the Air Force in late April for the chance to compete, specifically for their Evolved Expendable Launch Vehicle (EELV) program.

SpaceX won an injunction against ULA over the use of the RD-180 engines that power the Atlas V’s first stage. Each engine is manufactured by Russian company NPO Energomash, which caused some consternation in the midst of Russian military action in Ukraine and subsequent U.S. sanctions against Russia.

The injunction was recently lifted, but last Tuesday, Russian Deputy Prime Ministry Dmitry Rogozin announced a ban on the export of rocket engines to the United States. Purely commercial launches are still free to use Russian engines, but Russia will no longer export the engines to the U.S. for the purpose of launching military payloads. Launches like today’s would fall under that ban. According to ULA representatives, their company has a two-year store of RD-180 engines, which will ease their transition to the Delta rocket, which relies solely on American-made engines.

ULA will be using a Delta II rocket to launch NASA’s Orbiting Climate Observatory 2 (OCO-2) on July 1, if all goes as planned. The OCO-2 will be used to study what happens to carbon dioxide across the globe. The original OCO was lost in a launch failure in February 2009, as the payload fairing failed to separate and, due to the extra weight, the whole thing failed to reach orbit and crashed into the Indian Ocean.

The next launch scheduled for Cape Canaveral is the SpaceX Falcon 9 launch that was scrubbed earlier this month due to a helium leak. It has been rescheduled for June 11, and will carry six Orbcomm Generation 2 (OG2) low-Earth orbit communications satellites.

“Congratulations to all of our mission partners on today’s successful launch of the NROL-33 mission!  The ULA team is honored to deliver another critical national security asset to orbit together with the NRO Office of Space Launch and the Air Force,” said ULA’s Vice President of the company’s Atlas and Delta Programs Jim Sponnick. “Today’s launch occurred six days after last week’s GPS IIF-6 launch – the second time this year that this team has launched back-to-back missions within a week.  Successfully launching at this tempo is a testament to the team’s focus on mission success, one-launch-at-a-time, and continuous improvement of our launch processes.”