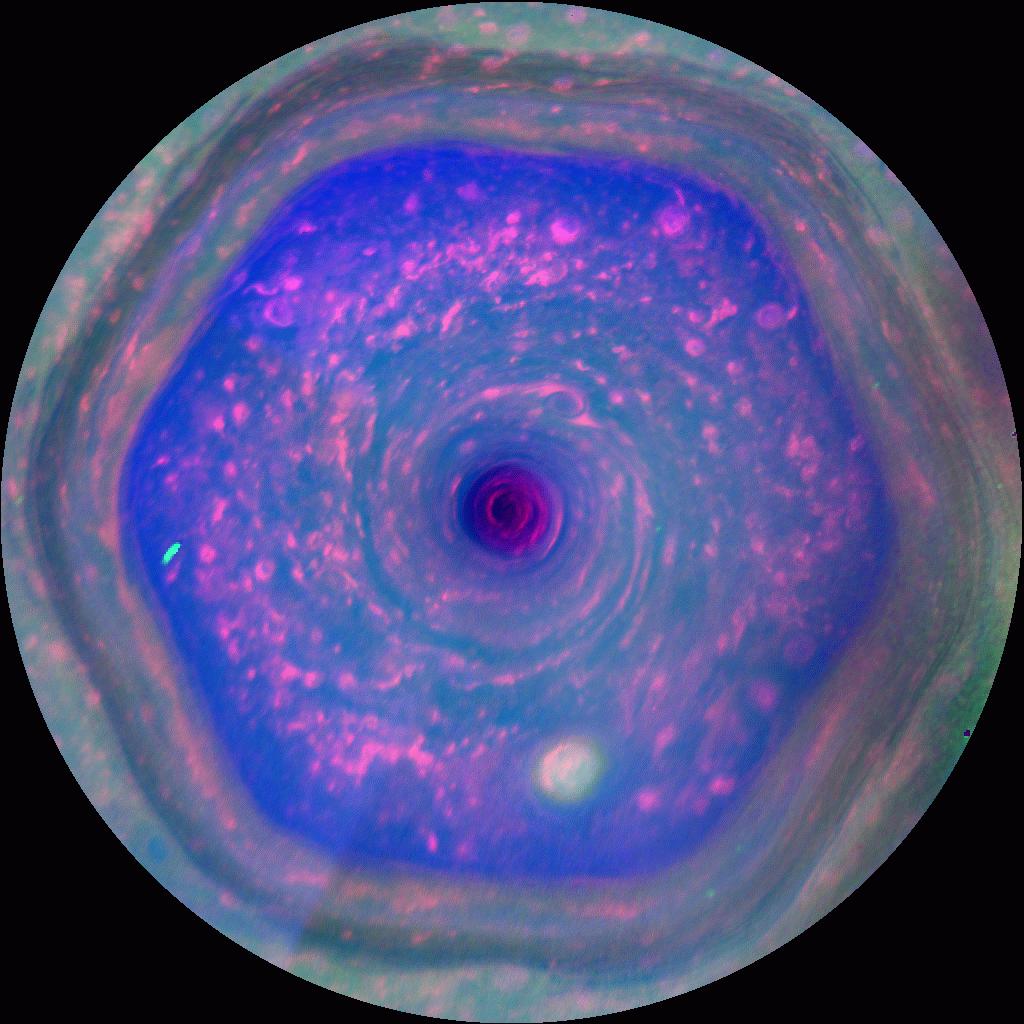 Still image from the movie sequence taken by Cassini of the colourful hexagon-shaped jet stream in Saturn's atmosphere above the north pole. Photo Credit: NASA/JPL-Caltech/SSI/Hampton University

The solar system is full of many planets and moons, each with their own unique characteristics and features, some of which have never been seen anywhere else. One such oddity is found on Saturn – a giant hexagon-shaped jet stream surrounding the planet’s north pole. It is a natural feature in Saturn’s atmosphere, although the near-perfect six-sided formation might make you look twice. Now, the Cassini spacecraft has taken the best-ever images of this hexagon, it was announced today.

In the center, over the pole, is a massive rotating hurricane-like storm, which in turn is bounded by the outer sides of the hexagon. As Andrew Ingersoll, a Cassini imaging team member at the California Institute of Technology in Pasadena, explained:

“The hexagon is just a current of air, and weather features out there that share similarities to this are notoriously turbulent and unstable. A hurricane on Earth typically lasts a week, but this has been here for decades – and who knows – maybe centuries.”

The images have been combined to create the first color and high-resolution movie of the hexagon, showing it in incredible detail. The images were taken over a ten-hour time span and provide the best view yet of the cloud structures within the hexagon. The Sun has been illuminating more of the hexagon’s interior since late 2012, allowing for better views inside the swirling wonder.

With winds of about 200 miles-per-hour winds (322 kilometers-per-hour), this storm is much larger and longer-lived than anything on Earth, measuring a colossal 20,000 miles (30,000 kilometers) across. It is theorized that, because Saturn is a gas giant planet with no solid land masses, storms like this are able to persist for much longer periods of time. On Earth, hurricanes and other storms get interrupted and broken up when they encounter land. The hexagon also behaves something like a huge hole in the atmosphere.

Over the next few years, scientists should be able to obtain even better views. According to Scott Edgington, Cassini deputy project scientist at NASA’s Jet Propulsion Laboratory in Pasadena, “As we approach Saturn’s summer solstice in 2017, lighting conditions over its north pole will improve, and we are excited to track the changes that occur both inside and outside the hexagon boundary.”

The hexagon adds even more beauty to an already fascinating world which is surrounded by its famous set of circular rings.

The movie and other related ones can be seen here.