Has Cassini seen the birth of a new Saturnian moon? 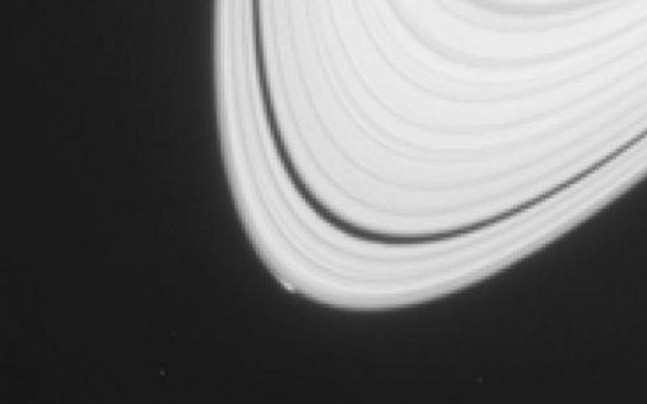 Image from the Cassini spacecraft showing the disturbances along the edge of Saturn's A ring which are thought to be caused by the formation of a new moon. Photo Credit: NASA/JPL-Caltech/Space Science Institute

Saturn has dozens of moons, ranging from the largest, Titan, which is larger than our own Moon, to small asteroid-sized objects. Now it seems that the Cassini spacecraft may have witnessed the formation of yet another moon, actually seeing the process as it is happening. Images taken on April 15, 2013 show what is thought to be the formation of a small icy object right on the edge of the A ring, the outermost of the big rings. Disturbances can be seen on the ring’s edge, one of which is an arc about 750 miles (1,200 kilometers) long and 6 miles (10 kilometers) wide. This arc is also about 20 percent brighter than the other nearby material in the ring. The disturbances are thought to be caused by the gravitational pull of a tiny body (a forming moon or moonlet). The images were taken by Cassini’s narrow-angle camera, looking toward the illuminated side of the rings, from a distance of 775,000 miles (1.2 million kilometers). Since arriving in orbit around Saturn in 2004 the Cassini mission has revolutionized our understanding of the “Lord of the Rings.” Image Credit: NASA / JPL

Although still forming, the object, nicknamed Peggy, is not expected to grow much larger, if at all, and is probably no more than half a mile, or one kilometer, in diameter.

According to Carl Murray of Queen Mary University of London, and the lead author of the new report, “We have not seen anything like this before. We may be looking at the act of birth, where this object is just leaving the rings and heading off to be a moon in its own right.” The formation of this new object may provide scientists with more information on how Saturn’s other moons have formed, possibly within ring systems themselves. Since the smallest moonlets are closer to Saturn and the larger moons are farther out, it is thought that at least some of Saturn’s moons formed initially closer in to the planet, from icy material in the rings, and then gradually moved outward, merging with other moons or moonlets to create even larger moons. The discovery may also give clues to planetary formation in our solar system or elsewhere.

“Witnessing the possible birth of a tiny moon is an exciting, unexpected event,” said Cassini Project Scientist Linda Spilker, of NASA’s Jet Propulsion Laboratory in Pasadena, Calif.; she adds that Cassini’s orbit will move closer in to the outer edge of the A ring in late 2016. This may provide a unique opportunity to study Peggy in more detail and perhaps even obtain direct images of it.

Since Saturn’s rings, likely once much larger than they are now, are probably too depleted to be able to spawn many if any new moons, Peggy may be the last chance for astronomers to witness such an event in the Saturnian system.

As Murray notes, “The theory holds that Saturn long ago had a much more massive ring system capable of giving birth to larger moons. As the moons formed near the edge, they depleted the rings and evolved, so the ones that formed earliest are the largest and the farthest out.”

The new discovery was published online yesterday in the journal Icarus.