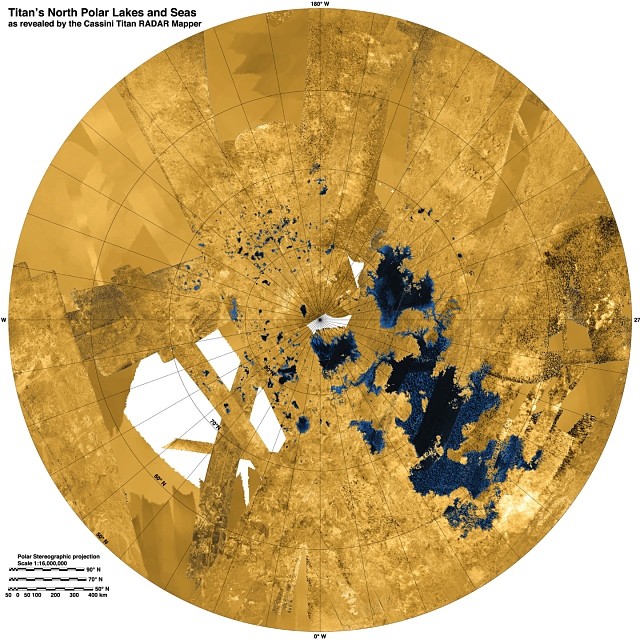 This colorized mosaic from NASA's Cassini mission shows the most complete view yet of Titan's northern land of lakes and seas. Image Credit: NASA/JPL

NASA’s Cassini probe is providing researchers with important new clues about Saturn’s moon Titan.  During a recent flyby Cassini has taken the most detailed images yet of Titan’s hydrocarbon seas and lakes. Titan is the only place in the solar system other than Earth that has stable liquid on its surface.

The Cassini flyby focused on the northern region of Titan which contains nearly all of the moon’s lakes and seas. Researchers used Cassini’s radar instruments to make a multi-image mosaic of the region.  The image contains all of Titan’s seas and most of the major lakes.   Scientists have combined theses images which images of the same areas that were taken from different images to create a flyby of Titan’s two largest oceans, Kraken Mare and Ligeia Mare. Members of the Cassini scientific team discussed the findings in San Fransisco, Calif.  at the American Geophysical Union (AGU) Fall Meeting, the world’s largest annual gathering of Earth and planetary scientists.

“Learning about surface features like lakes and seas helps us to understand how Titan’s liquids, solids and gases interact to make it so Earth-like,” said Steve Wall, acting radar team lead at NASA’s Jet Propulsion Laboratory in Pasadena, Calif. “While these two worlds aren’t exactly the same, it shows us more and more Earth-like processes as we get new views.”

The images show that Kraken Mare is more complex an extensive than previously thought. Researchers also discovered that nearly  all of the lakes and seas on Titan are within a region that is approximately 600 miles by 1,000 miles. 97% of the liquid on the surface of Titan is within this area. “Scientists have been wondering why Titan’s lakes are where they are. These images show us that the bedrock and geology must be creating a particularly inviting environment for lakes in this box,” said Randolph Kirk, a Cassini radar team member at the U.S. Geological Survey in Flagstaff, Ariz. “We think it may be something like the formation of the prehistoric lake called Lake Lahontan near Lake Tahoe in Nevada and California, where deformation of the crust created fissures that could be filled up with liquid.”

Scientists were able to determine the depth of Ligeia Mare using techniques originally developed to analyze data from Mars. Titan’s second largest sea was determined to have a depth of about 560 feet. This measurement was possible because the liquid is very pure and radar signals pass easily through it. The data indicates that the liquid is mostly methane.

“Ligeia Mare turned out to be just the right depth for radar to detect a signal back from the sea floor, which is a signal we didn’t think we’d be able to get,” said Marco Mastrogiuseppe, a Cassini radar team associate at Sapienza University of Rome. “The measurement we made shows Ligeia to be deeper in at least one place than the average depth of Lake Michigan.”

Fellow researcher Alexander Hayes, from Cornell University, used Mastrogiuseppe’s findings to calculate that there are approximately 2,000 cubic miles of liquid hydrocarbons on Titan’s surface, nearly 40 times more than all of the known oil reserves on Earth.

Mission scientists are looking forward to observing the approaching northern summer in the Saturn system which should be an exciting time for storms in Titan’s northern hemisphere.