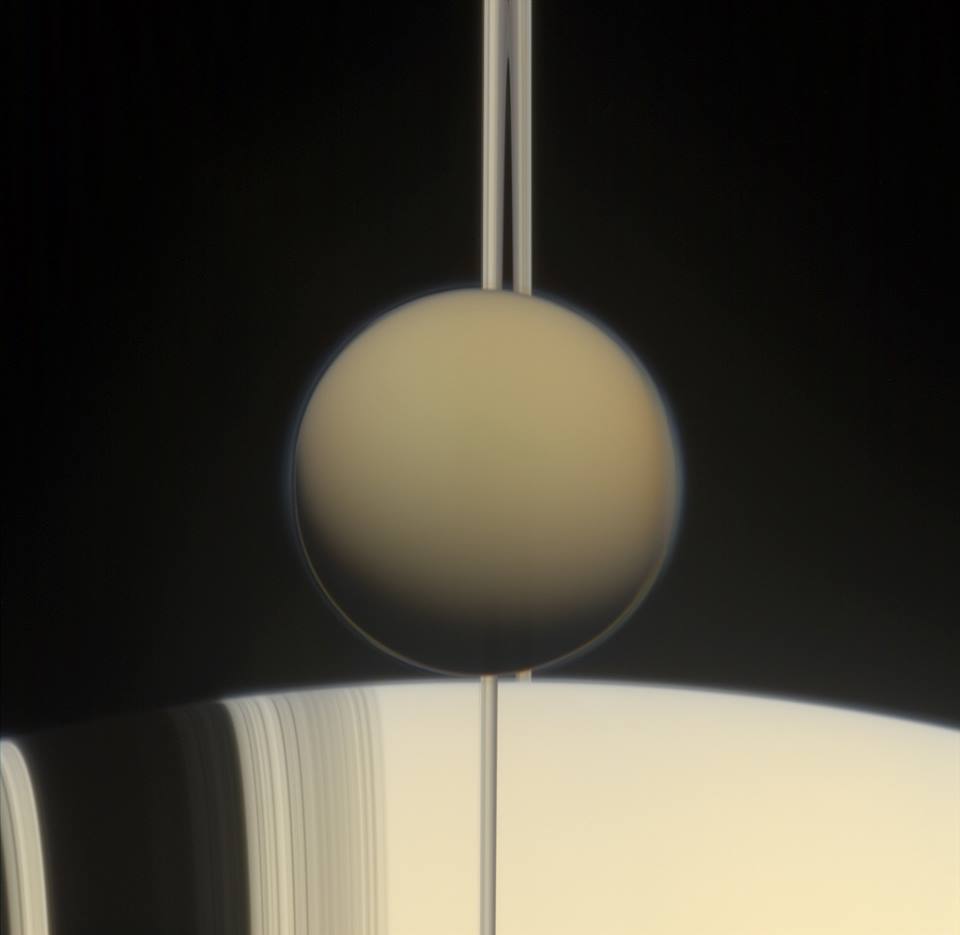 NASA's Cassini spacecraft has detected the chemical ingredients of one of mankind's most versatile materials in Titan, the smoggy moon of Saturn - plastic. Image Credit: NASA/JPL

A key ingredient of many plastics – propylene (or propene) – has been detected in the atmosphere of Saturn’s giant moon, Titan, by NASA’s Cassini spacecraft. This is the first time the molecule, which consists of three atoms of carbon and six of hydrogen linked together, has been seen on a world beyond the Earth. Titan is the only moon in the solar system that has a dense atmosphere – one-a-half times as dense as Earth’s. It is dominated by nitrogen with a rich infusion of various hydrocarbons and more complex organic molecules. Ultraviolet light from the sun snaps apart the simpler hydrocarbons, such as methane and ethane (the two commonest substances on Titan after nitrogen), allowing the fragments to recombine to form bigger molecules, including propylene. On Earth, propylene is polymerized – joined into long chains – in industrial plants to form polypropylene, which is the basis for all kinds of plastics in everyday life, like the ones used to make food-storage containers, automotive parts, and packaging.

Propylene is the first chemical found on Titan by Cassini’s Composite Infrared Spectrometer (CIRS), which detects infrared radiation, or heat waves, emitted from Saturn and its collection of moons. CIRS has the capability to spot chemicals in Titan’s lower atmosphere based on their unique thermal fingerprints. But the devil is in the detail. With such a confusion of organic molecules present, it’s hard to tell which features in the infrared spectrum belong to which substance.

“This measurement was very difficult to make because propylene’s weak signature is crowded by related chemicals with much stronger signals,” said Michael Flasar, a scientist at NASA’s Goddard Space Flight Center and principal investigator for CIRS. “This success boosts our confidence that we will find still more chemicals long hidden in Titan’s atmosphere.”

The identification came about by taking measurements at different altitudes in the lower atmosphere and gradually sifting out the faint signal that is exclusive to propylene. The discovery of this gas comes as a relief to planetary scientists who’ve been puzzling over its apparent absence for more than 30 years. Back in 1980, Voyager 1 – now plunging through interstellar space – became the first probe to fly past Titan at close range.

Its instruments registered many of the simpler chemicals in the orange-smog shrouded world’s atmosphere, including all members of the one- and two-carbon hydrocarbon families in the giant satellite’s atmosphere. From the three-carbon family, Voyager also picked up the tell-tale spectral signatures of single-carbon-bonded propane and tripled-bonded propyne, but not double-bonded propylene, which comes in between. Even as more and more organic chemicals came to light in Titan’s atmosphere, propylene failed to show up – until now.

“I am always excited when scientists discover a molecule that has never been observed before in an atmosphere,” said Scott Edgington, Cassini’s deputy project scientist at NASA’s Jet Propulsion Laboratory in Pasadena, Calif. “This new piece of the puzzle will provide an additional test of how well we understand the chemical zoo that makes up Titan’s atmosphere.”