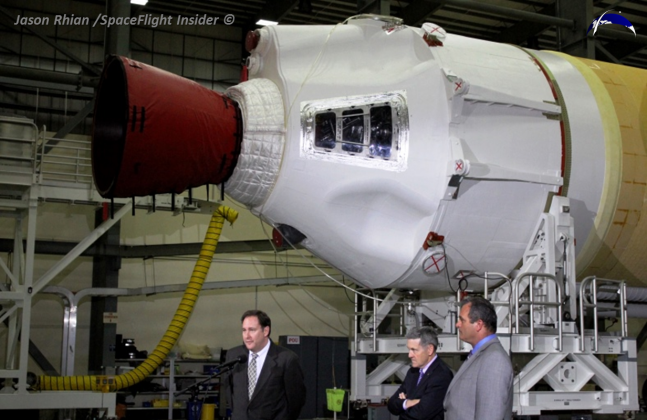 KENNEDY SPACE CENTER, Fla – Two of the three Common Core Boosters (CBC) which will form the Delta IV Heavy rocket that will carry NASA’s next-generation crewed spacecraft, Orion, to orbit have arrived at Cape Canaveral Air Force Station in Florida. NASA and United Launch Alliance (ULA), the supplier of the Delta IV family of rockets, are working to prepare the massive rocket for a December 4 launch date. A recent review of the launch vehicle’s progress revealed the complexity involved in getting one of these vehicles off the ground.

Video courtesy of SpaceFlight Insider with elements provided by NASA

This will mark the first time that the Delta IV Heavy has launched something other than a Department of Defense or test payload. The Orion Multi-Purpose Crew Vehicle will fly its first uncrewed mission atop the Delta IV in order to test out a number of key systems on board the spacecraft, primarily its avionics and heat shield. It also will provide engineers with a better understanding of the spacecraft’s flight characteristics so as to avoid the requirement to make changes later.

The Delta IV Heavy first flew in 2004 and has currently flown seven times. In many ways the Heavy variant of the Delta IV is like three rockets rolled into one. Each CBC is technically a Delta IV Medium rocket which can be modified with different varieties of ATK-provided GEM-60 graphite epoxy solid rocket motors and fairings. The last of the three CBCs is slated to arrive in April. Photo Credit: Mike Howard / SpaceFlight Insider

The launch of the Exploration Flight Test 1 or “EFT-1” will bear some resemblance to the flight of Apollo 4 back in the 60s. NASA’s Associate Administrator, Robert Lightfoot discussed the importance of this mission during a recent visit to Cape Canaveral’s Space Launch Complex 37.

“I’m an old rocket engine test guy and I have to say that this is very exciting,” Lightfoot said looking back at the Delta IV. “I’ve seen the RS-68s at the tail end of these boosters here test many times – but it’s pretty exciting to see them integrated into the booster.”

EFT-1 will see Orion fly well above the orbit of the International Space Station which circles the Earth at an altitude of some 250 miles. The spacecraft will venture out to a distance of about 3,500 miles, conduct two orbits and then return – at the blistering speed of some 20,000 miles per hour. When Orion hits the atmosphere its heat shield will be put to the ultimate test.

Orion is planned in conjunction with NASA’s new heavy-lift booster the Space Launch System or “SLS.” The first flight of the 70 metric ton version of this rocket is currently slated to take place in 2017. Due to budget constraints NASA has opted to slowly increase the capabilities of the launch vehicle until the 130 metric ton version comes into service.

“We talk about the stepping stone approach that we’re taking to Mars that we’re trying to do here as an agency and for us this EFT-1 test is so important to us…we’re going to test the heat shield, get a good test of the separation of the fairing, the launch abort system and we’re going to exercise about 50 percent of the software and the flight systems.”

Both SLS and Orion are planned for use on President Obama’s Asteroid rendezvous mission as well as planned crewed flights in the 2030s.

The rational behind the decision to have the launch slip to December was one based on national defense. A NASASpaceFlight.com report has detailed that it was decided to allow a military satellite for the Geosynchronous Space Situational Awareness (GEO SSA) system. Given the packed manifest that both the range and the launch service provider, ULA, has this year, it was decided to push Orion’s first flight back to ensure the satellite was placed on orbit this year. ULA has some 15 launches total on the manifest for 2014.

According to NASASpaceFlight.com, NASA had worked to maintain the September 18 launch date. National security concerns took precedent and the launch of Orion slipped to close the early part of December. It is possible that the slip to December will not be the only adjustment to the launch of EFT-1 with a December 15 launch perhaps more likely.

“The Orion spacecraft is in the O&C (Operations and Checkout Building) high bay right now,” said Cabana. “It is being worked on seven days a week. That vehicle is going to roll out there as a complete spacecraft and be ready to conduct EFT-1.” After taking several questions from the media, the three officials conducted a review of the HIF. Photo Credit: Sean Costello / SpaceFlight Insider