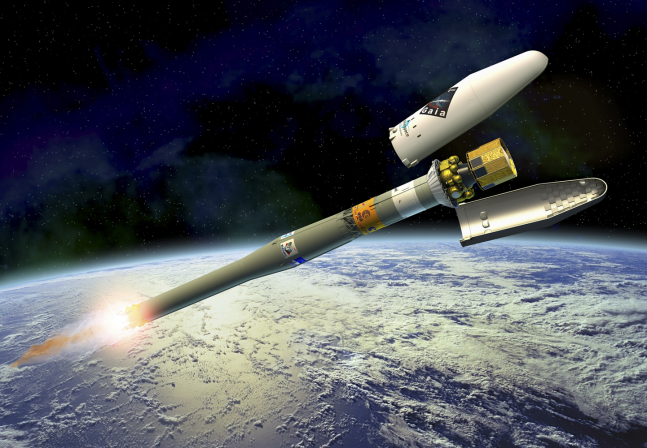 An artist's illustration of the Gaia spacecraft deploying from the booster which carried it to orbit. If all goes according to plan, Gaia will launch tomorrow atop a Soyuz rocket from French Guiana. Image Credit: ESA

The European Space Agency’s (ESA) long-awaited Gaia observatory is set to be launched from the Guiana Space Centre in French Guiana by a Soyuz ST-B rocket with a Fregat-MT upper stage Dec. 19 at 09:12:19 UTC . The main goal of the mission is to build up a precise 3D catalog of about one billion stars and other objects in the Milky Way Galaxy. If all goes according to plan, this mission should shed important new light on our galaxy’s origin, evolution, and composition.

Gaia will carry on and vastly extend the work done by an earlier ESA star-mapping mission, Hipparcos, which was active from 1989 to 1993 and collected data on 100,000 stars. The two-ton, 15-foot-wide spacecraft will operate from an orbit around the Earth-Sun L2 Lagrangian point – 930,000 miles away from Earth in a direction exactly opposite to that of the Sun. Gaia has its roots in a proposal first put forward by two scientists in 1993 and was adopted as an ESA cornerstone mission seven years later. “GAIA” started out as an acronym for “Global Astrometric Interferometer for Astrophysics” but although the optical technique being used on the spacecraft was changed during development the name Gaia was retained. Gaia undergoing a test of the deployment of its sunshield in 2011. Photo Credit: Astrium France

The mission’s task is to measure very precisely the position, motion, and properties of roughly one percent of all the stars in the Galaxy. To do this it has three science instruments for carrying out, respectively, astrometry, radial-velocity observations, and photometry. These instruments are fed with light collected by two telescopes, each having a rectangular primary mirror, with a collecting area of about 7.5 square feet, and a series of smaller mirrors of different sizes and shapes. These secondary mirrors repeatedly fold the light over a total distance of 115 feet before it reaches the detectors. Together Gaia’s 106 charge-coupled devices (CCDs) comprise one billion pixels covering an area of more than four feet – the largest focal plane ever flown in space, and dwarfing the 95 megapixel system (made by the same British company, e2v) carried aboard NASA’s Kepler planet-hunter.

Another factor behind the extraordinary precision of which Gaia is capable is its stability. It has no moving parts – even the antenna used to communicate with Earth points electronically, not mechanically. The frame on which the three science instruments are mounted is made of absolutely rigid silicon carbide which will not move no matter how much it heats up or cools down. And if fine adjustments are needed to the spacecraft’s orientation, they can be made with thrusts involving as little as 1.5 micrograms of nitrogen a second – thrusts so tiny that it would take a thousand of them to support a sheet of A4 paper. With its combination of billion-pixel camera, sensitive instrumentation, and extreme stability, Gaia will be able to track huge numbers of objects simultaneously down to magnitude 20 – 400,000 times fainter than can be see with the naked eye. Of the billion or so objects it will keep track of, 150 million of these will have their motion measured not just across the sky but towards us or away from us. These numerous radial-velocity observations are tremendously exciting because they’ll enable astronomers to fast-forward or rewind the evolution of the Galaxy as a whole, to chart its future development and understand what it was like billions of years ago. An artist’s illustration of the Gaia spacecraft mapping the stars of the Milky Way Galaxy. Image Credit: ESA