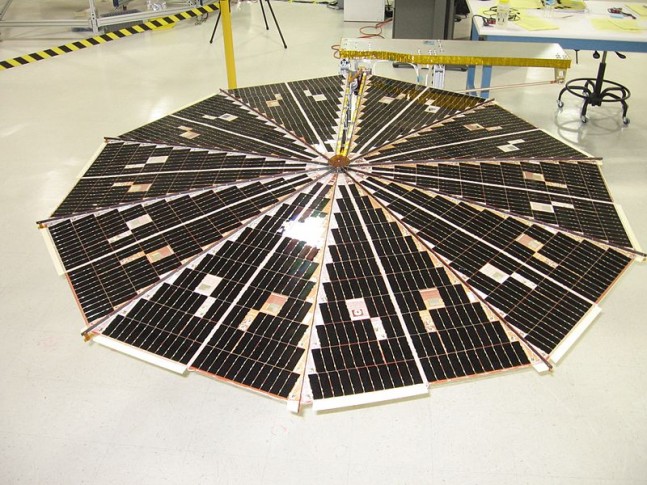 ATK's UltraFlex solar array opens like an umbrella and is reinforced by a tensioned blanket and the backbone of its stowage panels.

NASA’s Interior Exploration using Seismic Investigations, Geodesy and Heat Transport (InSight) Mars lander, which will provide information from deep beneath the Martian surface, will be powered by UltraFlex solar arrays. ATK, an aerospace, defense and commercial products company with operations in 22 states, Puerto Rico and internationally, was awarded the contract by Lockheed Martin to develop the arrays which will provide all the electrical power for the lander.

The UltraFlex solar arrays passed their design review in February of 2014. The InSight solar panels will be delivered for testing in 2015.

Lockheed Martin will build the InSight spacecraft. The project overall is being managed by the Jet Propulsion Laboratory. The lander will be equipped with a seismometer, heat flow probe, and cameras, and will use a technique called RISE to measure the planet’s wobble. The InSight mission will reveal new insights of terrestrial planet formation. Since Mars is less geologically active than Earth, we can learn more about the formation of rocky planets by studying Mars than we can on Earth. The UltraFlex solar arrays are composed of interconnected, ultra-lightweight triangles called gores. It folds up into a smaller volume than other types of array. When deployed, the array opens up like an umbrella. Once deployed, it remains stiff thanks to its tensioned blanket and the backbone formed by the stowage panels. These same arrays that powered the Mars Phoenix Lander in 2008.

ATK’s website states, “In many cases UltraFlex’s unique performance characteristics have been key to a mission’s feasibility.”

In fact, the UltraFlex solar arrays are partially credited with the Phoenix mission’s having been extended three times. ATK’s MegaFlex panels will be used on the Cygnus spacecraft later this year. Photo Credit: NASA

A similar solar panel is being developed for use in NASA’s Asteroid Redirect Mission (ARM). MegaFlex is a variation on the UltraFlex design, modified for high-powered spacecraft such as those using solar electric propulsion, one of the key ingredients of ARM. The MegaFlex solar array will provide over ten times the power of the largest satellite arrays in use today.

The UltraFlex solar arrays will be flown later in 2014 aboard the Commercial Resupply System (CRS) developed by Orbital Science to deliver supplies to the International Space Station. Earlier this year the Cygnus cargo ship was launched by an Antares rocket carrying a Pressurized Cargo Module for delivery to the ISS.