AsiaSat 6 poised to launch atop Falcon 9 rocket this weekend 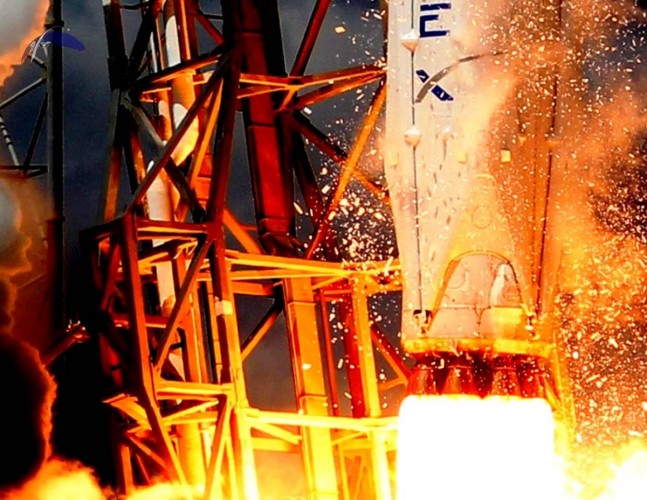 CAPE CANAVERAL, Fla – Space Exploration Technologies or “SpaceX” has confirmed that their next attempt to launch AsiaSat 6 from Cape Canaveral Air Force Station’s Space Launch Complex 40 (SLC-40) in Florida will be no earlier than Sunday, Sept. 7. The communications satellite will provide video broadcasts and data services to China and Southeast Asia over the next 15 years. AsiaSat 6 being loaded into the payload compartment of the Falcon 9 nosecone. Photo Credit: AsiaSat

SpaceX  plans to launch a Hong Kong-based telecommunications satellite into orbit atop their Falcon 9 rocket at 12:50 a.m. EDT (0450 GMT). The 3-hour and 14-minute launch window extends until 4:04 a.m. EDT with favorable weather conditions listed as being at about 70 percent. Weather forecasts are showing a chance of rain showers with partly cloudy skies throughout the launch window.

At 3 p.m. EDT, Cape Canaveral went under a Phase II lightning warning – one which apparently would extend through 7:30 p.m. EDT.

Originally slated for August 27, SpaceX postponed the launch in order to conduct a systems check on the rocket’s fault detection software following the destruction of a reusable Falcon prototype exploded during a test flight in Texas on August 22. However, a statement released by SpaceX CEO Elon Musk a few hours after the scrub reassured that there was no direct correlation between the failure of their test rocket in Texas and the current rocket in Florida.

“What we do want to triple-check is whether even highly improbable corner case scenarios have the optimal fault detection and recovery logic,” explained Musk in his statement. “This has already been reviewed by SpaceX and multiple outside agencies, so the most likely outcome is no change.” On Wednesday, September 3, almost two weeks after the initial launch date, it was announced that the next attempt would take place on Saturday, September 6.  The next day the expected launch date was rumored to have changed to Sunday, September 7. On Friday, September 5, SpaceX confirmed their plans of a early Sunday morning launch.

Thick clouds due to a passing tropical wave along with heavy rain and lightning inundated the region in the pre-launch hours. Weather is predicted at providing a 70 percent favorable chance of launch after Monday – should the launch be delayed again.

The launch team will oversee the fueling of the rocket and after the Falcon 9’s systems are checked, the launch sequence begin – about some 12 hours prior to the planned launch time.

Shortly after this period kicks off, the NewSpace firm will check out the booster’s communications, flight termination, navigation and other mission-critical systems.

Prior to releasing the rocket from the pad, the Falcon’s nine Merlin 1D engines will ignite and undergo a series of automated system checks. After the Falcon lifts off, it will turn east, providing 1.3 million pounds of thrust during the three minute first stage engine burn.

The rocket has a single engine in its second stage and will complete two engine burns, which will place AsiaSat 6 in the required orbital inclination of 25.3 degrees. Approximately 32 minutes after lift off, the communications satellite will be inserted into an elliptical geostationary transfer orbit. Due to the weight of the satellite, around 9,900 pounds (4,499 kilograms), SpaceX will not attempt to recover the rocket’s first stage.

AsiaSat president and CEO, William Wade, said that AsiaSat 6 is expected to deploy its solar panels and communications antennas and maneuvering into its operational orbit, 22,300 miles above the Earth. It will orbit above a fixed point along the Earth’s equator and is scheduled to start providing service approximately a months after launch.

This marks the second AsiaSat mission for SpaceX. The first, AsiaSat 8, successfully launched at 4:00 a.m. EDT (0800 GMT) on August 5. With the satellite being released 23 minutes after liftoff. A payload power of 8,500 watts, 24 ku-band transponders and a high bandwidth ka-band payload make AsiaSat 8 the most powerful in AsiaSat’s current satellite fleet. It is located in the same orbital “slot” as the Hong Kong-based company’s existing satellite, AsiaSat 7, about 22,370 miles (33,601 kilometers) above Earth in geosynchronous orbit. “The purpose of that is to be able to separate the traffic, so we aren’t competing with each other in selling and marketing the capacity,” Wade said. “For AsiaSat, the bulk of that capacity as we see it will be used in China — C-band capacity in China — for video services and other telecommunications and data services … whereas we expect the Thais to use it for data services in Southeast Asia.” Both AsiaSat 6 and AsiaSat 8 are designed to last 15 years. Their purpose is to provide video and telecommunications services primarily to China by use of the spacecraft’s 28 C-band transponders. Thaicom of Thailand agreed to pay AsiaSat installments totaling more than $170 million over the next 15-years for the use of one-half of an AsiaSat satellite. Thaicom will have access to half of the AsiaSat 6 satellite’s 28 C-band transponders once it is placed in an arranged Thai orbital position at 120 degrees east longitude. The satellite will be named as AsiaSat 6/Thaicom.

“I’m not sure very many satellite operators have ever launched back-to-back like we’re doing. We certainly never have,” Wade said. “Our history has usually been a little bit more conservative where we launched satellites usually three-to-four years apart mainly for replacement satellites or some growth that way.”

The two satellites were originally slated to launch earlier this spring, but due to delays in other SpaceX missions, they were pushed back until late summer/fall. Launching two satellites this close together and with the same carrier is rare in today’s commercial satellite market; however, AsiaSat is please with SpaceX’s overall performance.

“Obviously, we’re launching a little bit later,” Wade said. “These satellites were originally scheduled to launch in the spring, so we’re delayed on that. But they’ve done a great job. Our experience with them has been very good.”

“We got a great launch with AsiaSat 8. It was a little bit later than we had hoped, but I think we knew there was that possibility when we signed up because launching rockets is complicated,” Wade said. “You kind of have to learn as you go along, and some things are unpredictable. Our experience so far has been very good. The people have been very responsive to our needs, and very open about what we needed to do.” was just coming in from playing card when she went up. how awesome was that? it was so good. LOVE the space programs and private companies that took over. LOVE to see them go. Kepp it up and safe.