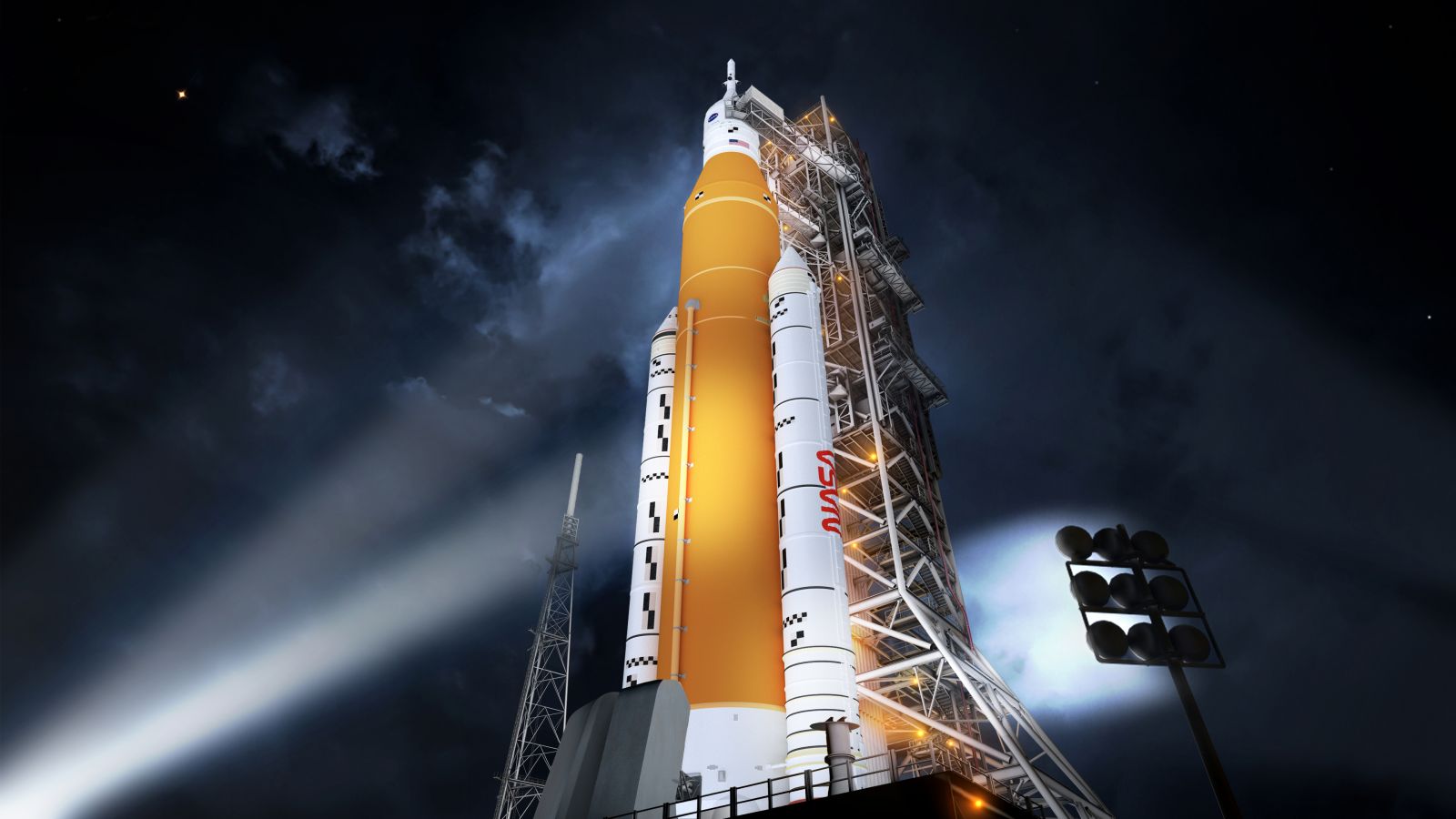 HUNTSVILLE, Ala. — NASA is working toward a March 17 rollout of its Artemis I Space Launch System (SLS) rocket from Kennedy Space Center’s (KSC‘s) Vehicle Assembly Building (VAB) for an early-April Wet Dress Rehearsal (WDR) at nearby Launch Pad 39B — in anticipation of a summer 2022 launch.

SLS was designed, and is managed, by the agency’s Marshall Space Flight Center (MSFC) in Huntsville, Alabama. On March 4, SpaceFlight Insider was on hand at MSFC for a media event held to provide an update on Artemis and SLS program progress.

In opening remarks, the center’s director, Jody Singer, informed that a MSFC-level Artemis I Flight Readiness Review (FRR) was completed March 3, and that reaching this “critical milestone” allows NASA to move forward with an agency-level FRR.

“We learned a lot at the Green Run Test that we did down at the Stennis Space Center [(SSC)],” Honeycutt said. “I was just pleasantly surprised at how well the rocket performed in the Green Run. From being sealed up tight, to the hydraulic systems, pneumatic systems, the auxiliary power units, and then the RS-25’s, it was truly a great test.”

Following the Green Run, the core stage was transported, by NASA’s “Pegasus” barge, from SSC to KSC and stacked in the VAB with other Artemis I components — two solid rocket boosters (SRB’s), the Launch Vehicle Stage Adapter (LVSA), the Interim Cryogenic Propulsion Stage (ICPS), the Orion Stage Adapter (OSA), the Orion capsule, and the Launch Abort System (LAS).

Now that Artemis I has been fully integrated, NASA has announced that the vehicle will roll out of the VAB (on its mobile launcher, carried by a crawler-transporter) no earlier than (NET) 6 p.m. EDT March 17, 2022, for an 11-hour trip to the pad. 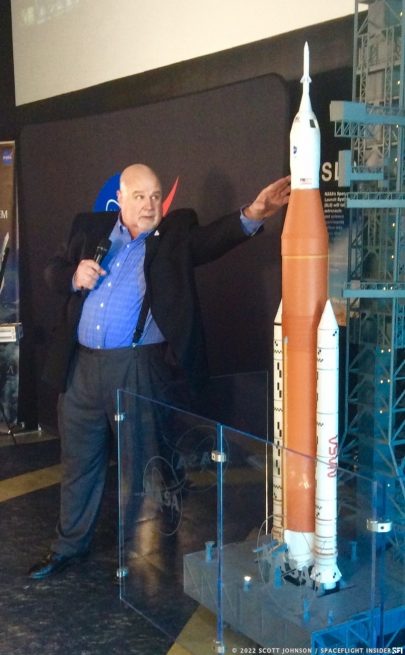 At the March 4 event, SpaceFlight Insider asked Honeycutt what were some of the “longer poles in the tent” his team needed to work for the rollout to occur on March 17.

“Our part that’s left on getting ready to rollout has been, primarily, supporting the folks at EGS at KSC, on getting the rocket, Exploration Ground Systems, getting it ready to go fly,” Honeycutt said. “And so, I see on a weekly basis a punch list. We’ve got a team of folks that are managing closing out the paperwork, and any additional work, that’s got to be done on the rocket.“

”Right now, for the majority of it, it’s kind of ankle-biter kind of stuff, it’s putting RTD [(resistance temperature detectors)] on the booster closeouts, and around the boat-tail, on the engine, and doing some continuity checks, and that sort of thing,” he added. “My deputy attends to the daily work, every day, and monitors that so I, to my knowledge, I’m not seeing anything that’s high risk.”

On Feb. 24, the date the March 17 rollout date was announced, Mike Bolger, EGS Program Manager, said that there were four days of schedule margin associated with the date. SpaceFlight Insider asked if this was still the case. Honeycutt stated he’s not the person responsible for tracking the margin, and as a result, he is unsure.

The purpose of the rollout is get the rocket to the launch pad for a series of tests and checks culminating in a simulated launch countdown — called a Wet Dress Rehearsal (WDR), due to the vehicle actually being filled with the “wet” liquid hydrogen (LH2) propellant and liquid oxygen (LOX) oxidizer needed for flight.

“The reason we test is to learn, but the next step in the learning is going to be when we roll out to the pad, around March 17, and we get to that Wet Dress Rehearsal in early April,” Honeycutt said. “So, we’ll get it out to the launch pad, and we’ll get it inspected, and we’ll get all the electrical connections, fluid connections, hooked up, and then we’ll go through a series of tests.”

“We’ll be checking out the functionality of the software systems on the rocket, and how they interface with the ground,” he added. “And we’ll basically just do everything from starting the countdown, going through the various holds, probably working through, hopefully not, but probably we’ll probably get to work through some minor technical issues, and then we’ll run all the way down to just right before we go to start the RS-25’s, and that’ll culminate the test.”

Honeycutt stated that he will be in KSC’s Launch Control Center (LCC) during the WDR.

“It’s been a while since I’ve done that for a big test like this. I’ll be looking forward to going back and doing that again,” Honeycutt said. “I’ll have a team of technical experts close by me, and they’ll be watching and monitoring the systems, and we’ll work through as many channels that we have, along with the rest of the mission management team that’s comprised of folks across the enterprise.”

“We’re fixing to go through another first-time event, and it’s going to be a learning opportunity for us,” Honeycutt stated. “We may see some leaks. We may see some things that we’ve got to go tweak, but from a systems standpoint, we’ve done everything that we can do to put ourselves in the best position possible.”

“Artemis I is going to be extremely important to us,” he added. “In this uncrewed test flight, to be able to take a look at the data we get back from those thousands of what we call development instrumentation, items that we’ve got scattered all over the rocket, so that we learn what we need to know, to anchor our models, so that we understand even further what we need to do to go fly crew on Artemis II.”

To wrap up the day, media had the opportunity to tour the MSFC Building 4205 System Integration Lab (SIL) and speak with Dan Mitchell, SLS Program Software Lead. We asked if there was anything still being worked for Artemis I — troubleshooting or otherwise.

“Not troubleshooting,” Mitchell said. “There are particular launch periods available for each month, so that’s what the continued testing that we do here in the lab is, so readiness and compatibility for each of the launch windows.” 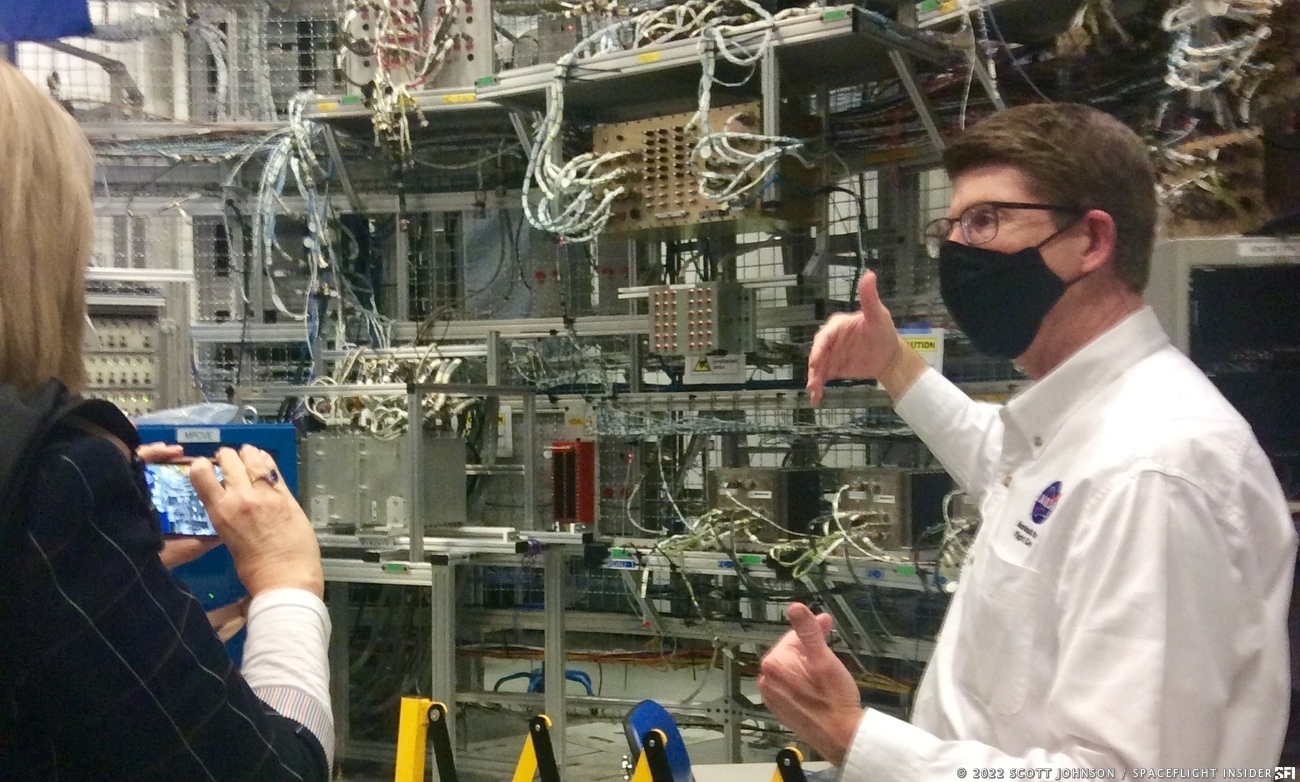