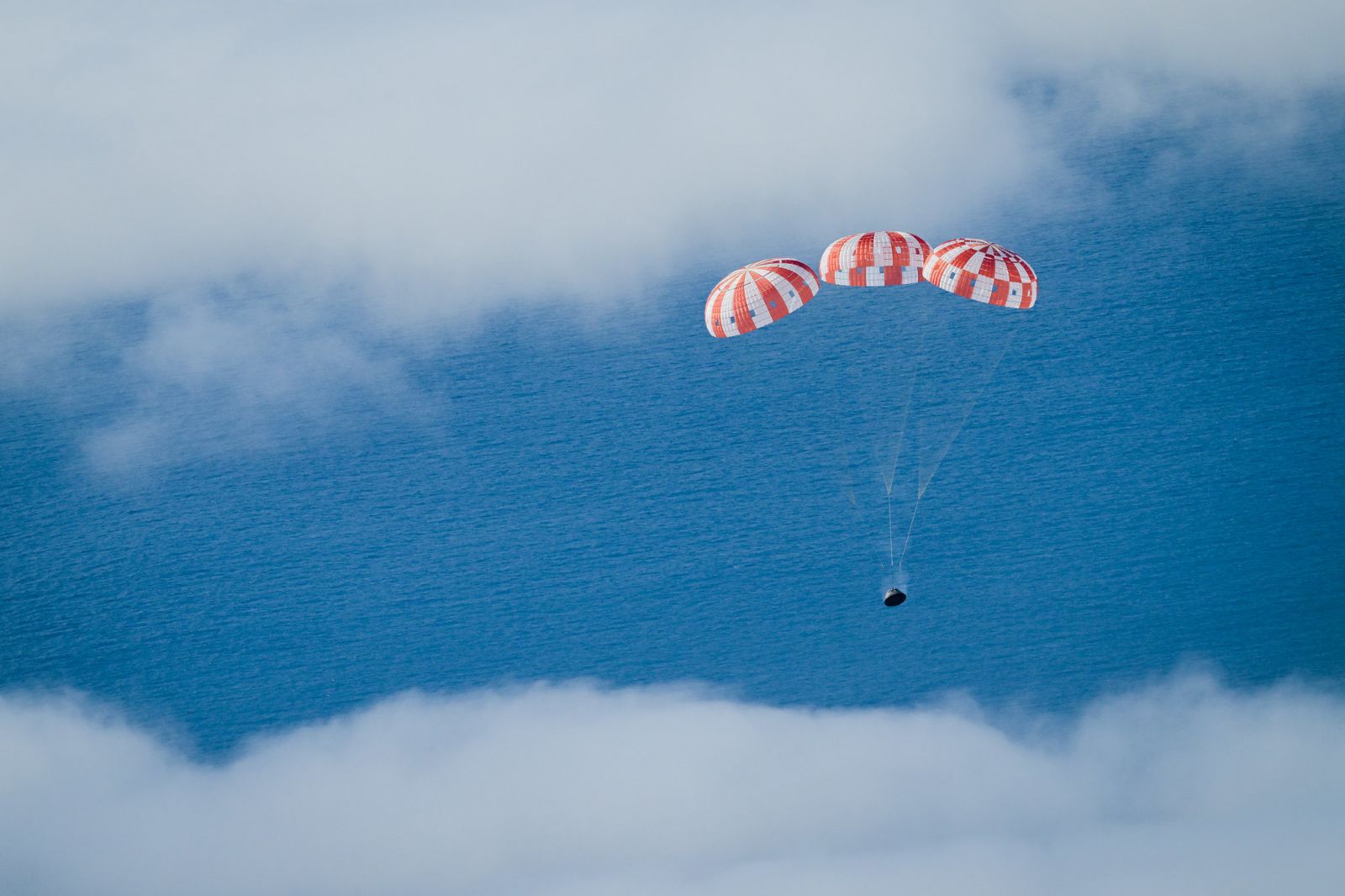 The Orion capsule parachutes toward the Pacific Ocean after completing the Artemis 1 mission. Credit: NASA

After more than 25 days in deep space, NASA’s Orion capsule has splashed down in the Pacific Ocean, completing the uncrewed Artemis 1 Moon mission.

The Artemis 1 mission tested out the combined Space Launch System rocket and Orion spacecraft during liftoff as well as evaluated the spacecraft on a month-long mission that took it around the Moon. This paves the way for NASA to fly the Artemis 2 mission in two years, which will include the first humans to travel to the Moon since 1972. 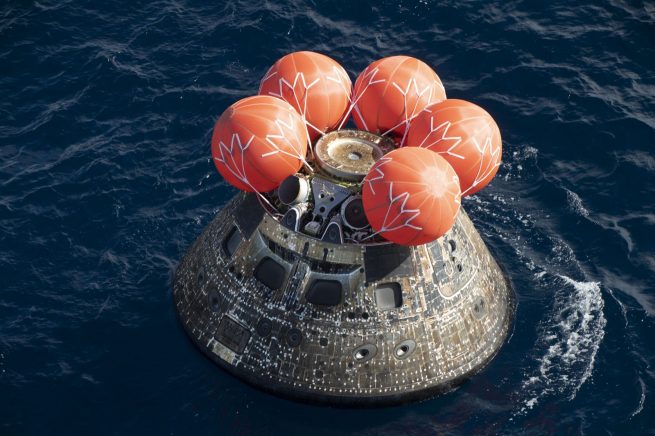 The Orion capsule waits in the Pacific Ocean for recovery by the USS Portland. Credit: NASA

“From the launch of the world’s most powerful rocket to the exceptional journey around the Moon and back to Earth, this flight test is a major step forward in the Artemis Generation of lunar exploration,” said NASA Administrator Bill Nelson. “It wouldn’t be possible without the incredible NASA team. For years, thousands of individuals have poured themselves into this mission, which is inspiring the world to work together to reach untouched cosmic shores. Today is a huge win for NASA, the United States, our international partners, and all of humanity.”

Artemis 1 launched atop the SLS rocket at 1:47 a.m. EST (06:47 UTC) Nov. 16, 2022, and propelled the Orion capsule toward the Moon where the European-built service module performed a series of burns — coming as close as 80 miles (130 kilometers) of the lunar surface — to place the spacecraft into a distant retrograde orbit.

The distant retrograde orbit was entered on Nov. 25 and Orion remained there for six days. At its farthest, Orion traveled nearly 270,000 miles (435,000 kilometers) away from Earth — farther than any spacecraft built for people and designed to return to Earth.

Another series of burns — one on Dec. 1 and another on Dec. 5, placed the spacecraft on a trajectory to return to Earth. 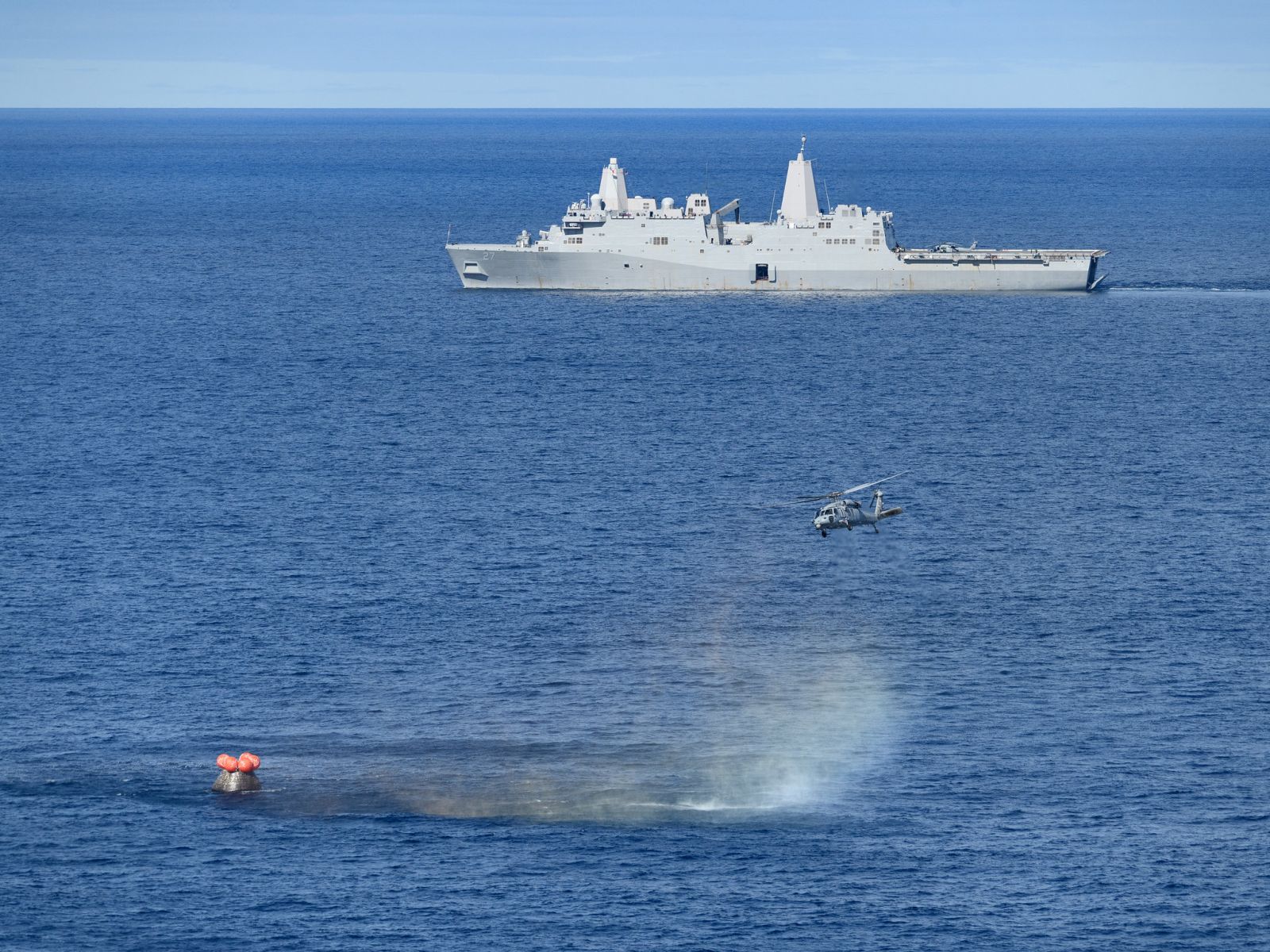 A helicopter flies over Orion as the USS Portland waits nearby to begin recovery operations. Credit: NASA

Before reentering the atmosphere, the European Service Module was jettisoned. The Orion capsule then performed a “skip” reentry — a first for a human rated spacecraft — in order to give the vehicle more precision in returning to Earth. 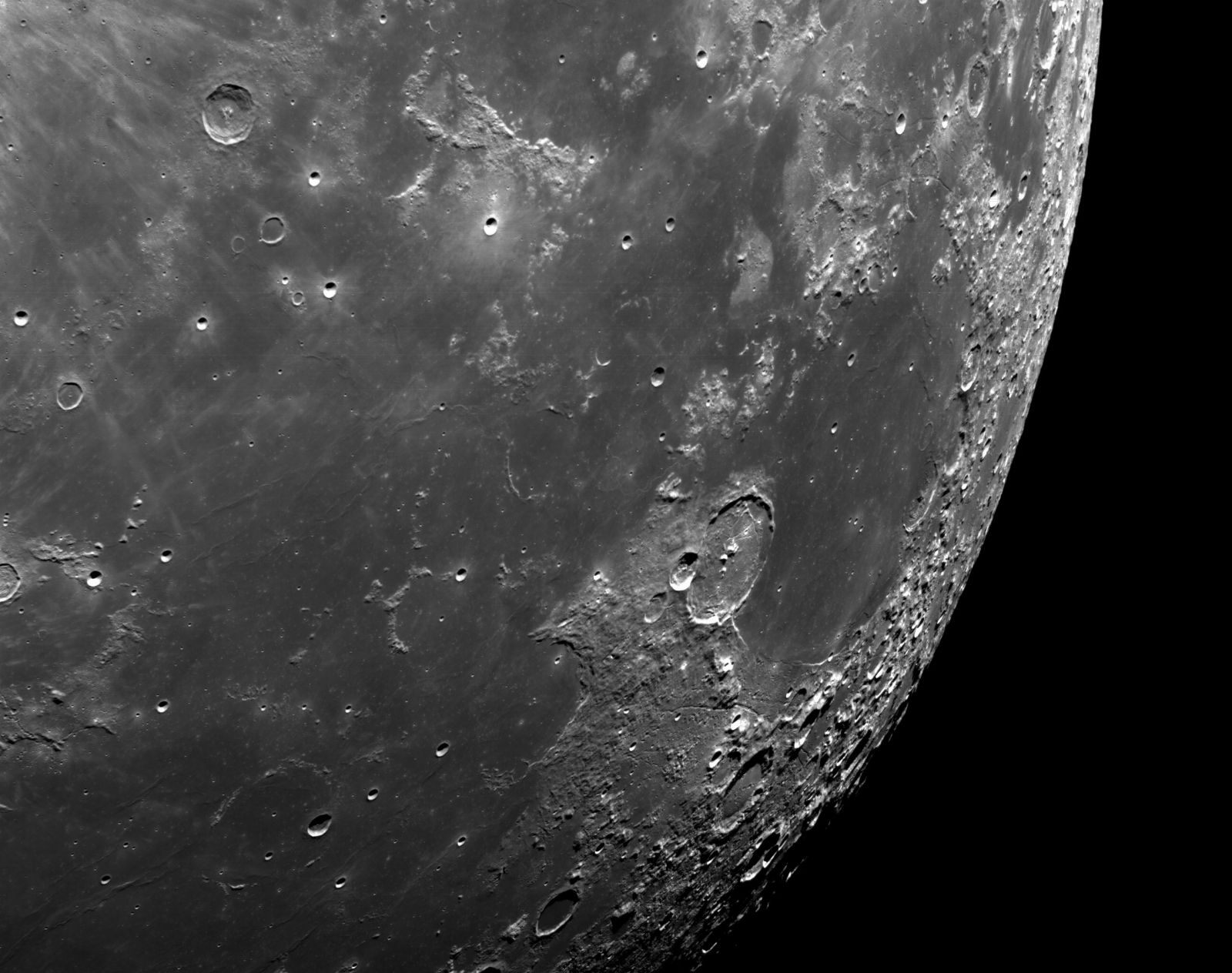 “Orion has returned from the Moon and is safely back on planet Earth,” said Mike Sarafin, Artemis 1 mission manager. “With splashdown we have successfully operated Orion in the deep space environment, where it exceeded our expectations, and demonstrated that Orion can withstand the extreme conditions of returning through Earth’s atmosphere from lunar velocities.”

In a sort of cosmic coincidence, this splashdown came 50 years to the day when the final Apollo Moon landing, Apollo 17, touched down on the surface of the Moon.

During that mission NASA astronauts Eugene Cernan and Harrison Schmitt spent three days in the Taurus-Littrow valley, completing three moonwalks to wrap up humanity’s first exploration of the Moon.

With Artemis, NASA aims to return to the Moon in a sustainable way while bringing along commercial and international partners. As such, when Artemis 2 flies as early as 2024, it’ll include three NASA astronauts and one Canadian astronaut. Their mission will be roughly 10 days and include a free-return trajectory around the Moon.

NASA said it hopes to announce this crew in early 2023. 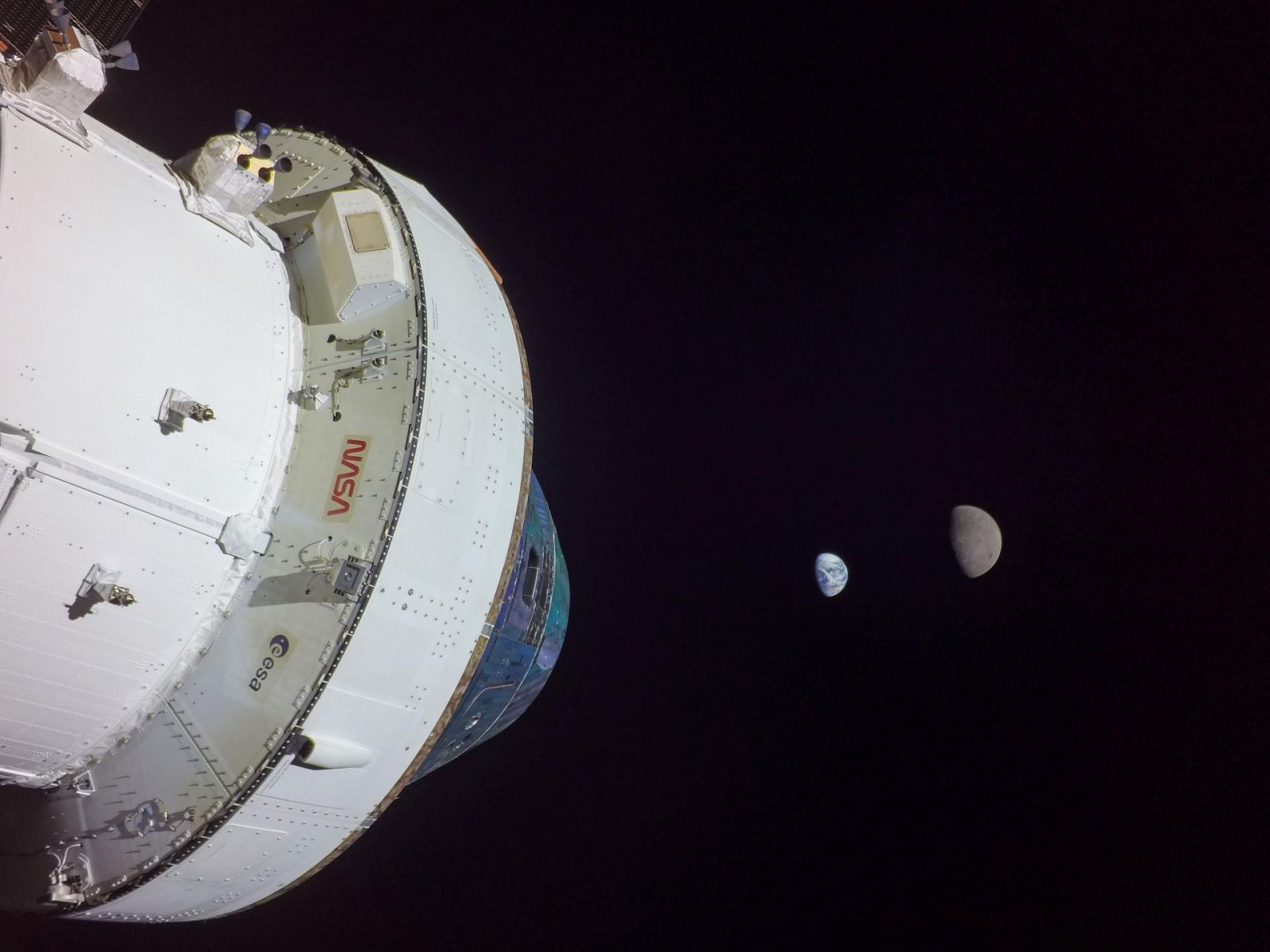 A view of Earth and the Moon from the farthest point in Orion’s trajectory — about 270,000 miles from Earth. Credit: NASA

Following Artemis 2, Artemis 3 is currently expected to see the first humans land on the Moon since 1972. This requires spacesuits and a human landing system to be developed by Axiom Space and SpaceX, respectively. 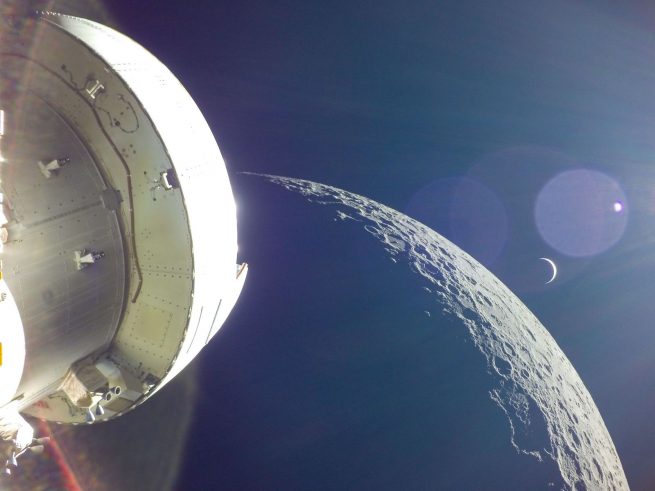 Earth rises from behind the Moon during Orion’s return powered flyby. Credit: NASA

Future Artemis missions will see astronauts visit and assemble a small outpost called the Lunar Gateway in a “near-rectilinear halo orbit” around the Moon. This will serve as a rendezvous point for crew and hardware before performing service missions.

Additionally, NASA hopes to start building a base on the South Pole of the Moon by the end of the decade.

The hope is to utilize suspected water ice in permanently shadowed craters to begin learning how to “live off the land” by harvesting it and converting it to water, air and potentially rocket fuel.

All of these serve to help NASA plan for future human missions to Mars in the 2030s.

“With Orion safely returned to Earth we can begin to see our next mission on the horizon which will fly crew to the Moon for the first time as a part of the next era of exploration,” said Jim Free, NASA associate administrator for the Exploration Systems Development Mission Directorate. “This begins our path to a regular cadence of missions and a sustained human presence at the Moon for scientific discovery and to prepare for human missions to Mars.”