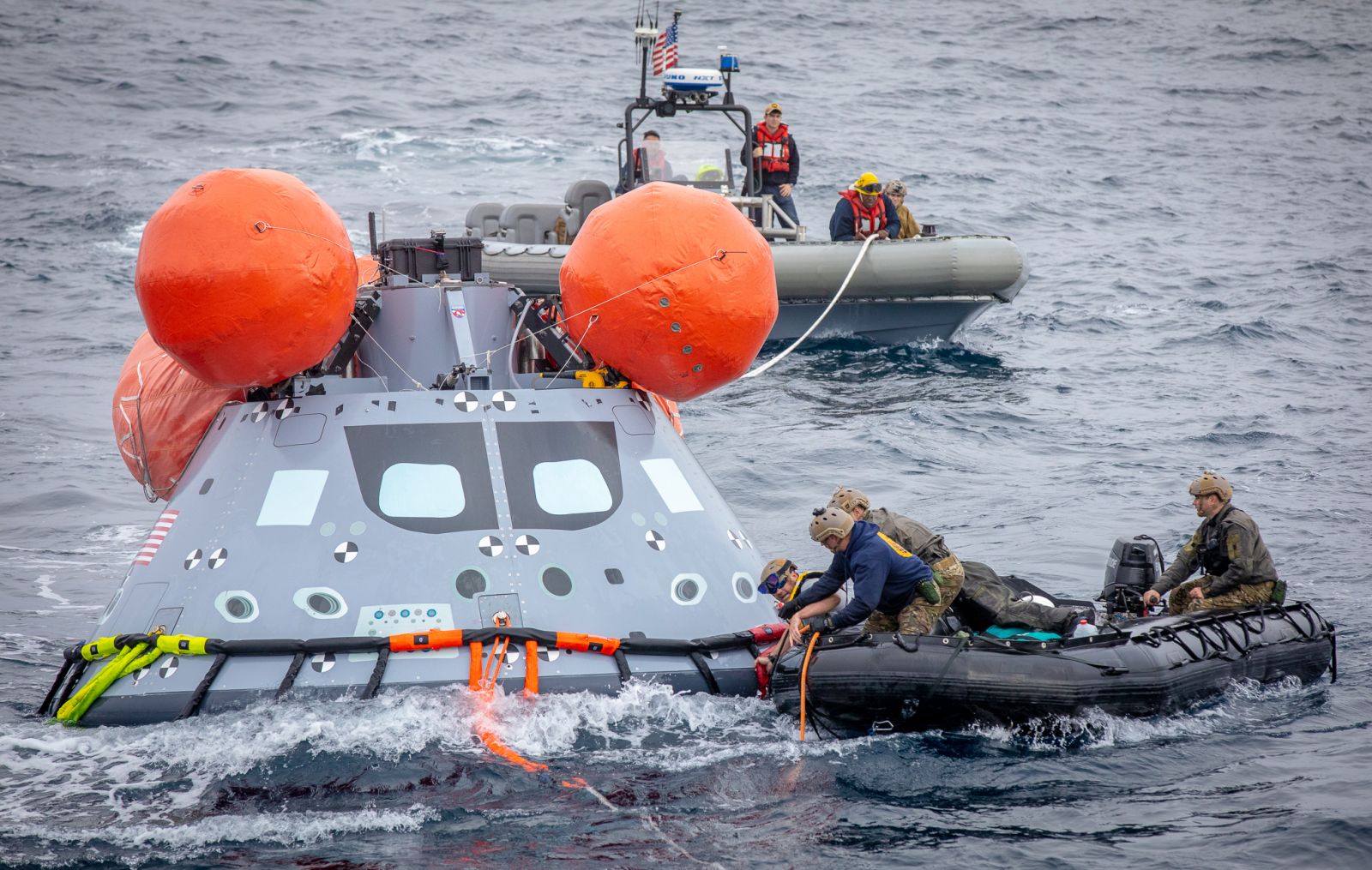 NASA and Department of Defense teams practice the recovery of a mock Orion capsule in the Pacific Ocean. Credit: NASA/Frank Michaux

NASA’s Landing and Recovery team recently completed its ninth recovery test at sea and is certified to recover the Orion spacecraft for the Artemis 1 mission next year.

According to NASA, a weeklong test in early November 2021 in the Pacific Ocean aboard the USS John P. Murtha was performed by NASA and Department of Defense teams in order to ensure they are ready to recover the Orion capsule following its splashdown at the conclusion of its roughly month-long uncrewed test flight.

Artemis 1 is currently expected to launch atop the inaugural flight of the Space Launch System no earlier than Feb. 12, 2022, from Launch Complex 39B at NASA’s Kennedy Space Center in Florida.

“For the past several years, NASA and DoD have been working together to develop the procedures and hardware necessary to safely recover Orion, not only after this uncrewed flight, but also for future crewed missions onboard the spacecraft.,” said Melissa Jones, NASA recovery director based out of Exploration Ground Systems at Kennedy Space Center in Florida, in an agency release.

Testing and checkouts for recovery of the spacecraft were conducted ahead of Artemis 1, a mission that will send the capsule, built by Lockheed Martin, into a distant retrograde orbit around the Moon.

These system checks are meant to examine the procedures of recovery operations, including the hardware of the capsule.

NASA said once the spacecraft splashes down in the Pacific Ocean, a team of divers, engineers and technicians are expected to depart the ship on small boats to reach the capsule in order to secure it and tow it to the back of the recovery ship. The area the capsule will be towed into is called the well deck where it will be secured for the trip back to shore.

The recently fully-integrated system is preparing for final check-outs ahead of the Artemis 1 mission. The next major task for the rocket stack will be a roll out to Launch Complex 39B for a wet dress rehearsal — a mock countdown and fueling test — before it is returned to the VAB to be readied for its actual flight.