NASA said it is aiming to launch the uncrewed Artemis 1 Space Launch System rocket next week after weathering Hurricane Nicole as it came ashore over south Florida.

The agency said SLS and the Orion spacecraft only received minor damage and the vehicle did not experience winds that exceeded its certification limits. Assuming engineers make any needed repairs and prepare the rocket in time, NASA hopes to attempt to fly Artemis 1 no earlier than a two-hour window that opens at 1:04 a.m. EST (06:04 UTC) Nov. 16, 2022. 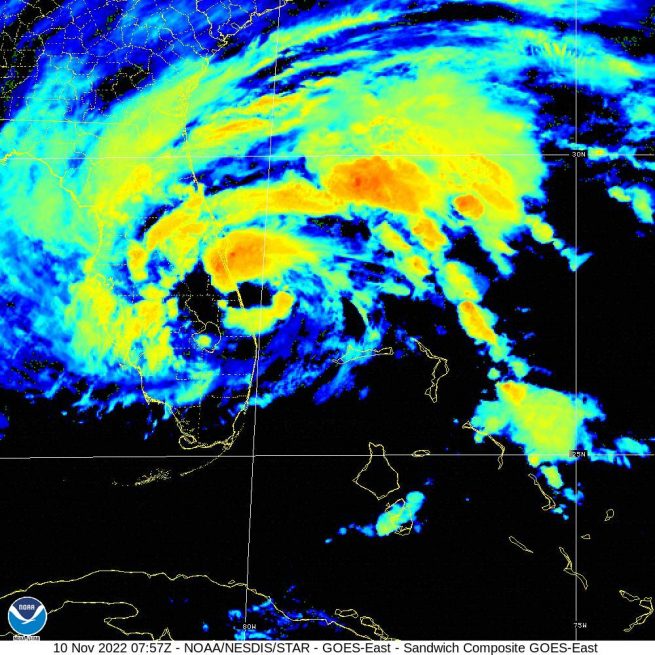 Hurricane Nicole as it made landfall on the Florida coast. Credit: NOAA

Mission managers rolled the Artemis 1 SLS rocket and Orion spacecraft out to Launch Complex 39B at NASA’s Kennedy Space Center in Florida on Nov. 4. While there were early indications that a tropical system could form in the Atlantic Ocean a few days after rollout, NASA said the risk assessment at the time was low.

By the time it became clear that what would become Hurricane Nicole would form and take aim on the south Florida coast, it was too late for NASA to return the rocket back to the safety of the Vehicle Assembly Building — wind limits for a rollback would have been too high. So, the rocket remained secured at the pad.

Among the things engineers will need to repair include loose RTV sealant on Orion, a tear in an engine rain cover and water in the crew access arm. Additionally, an umbilical on Orion came off its tray, NASA said.