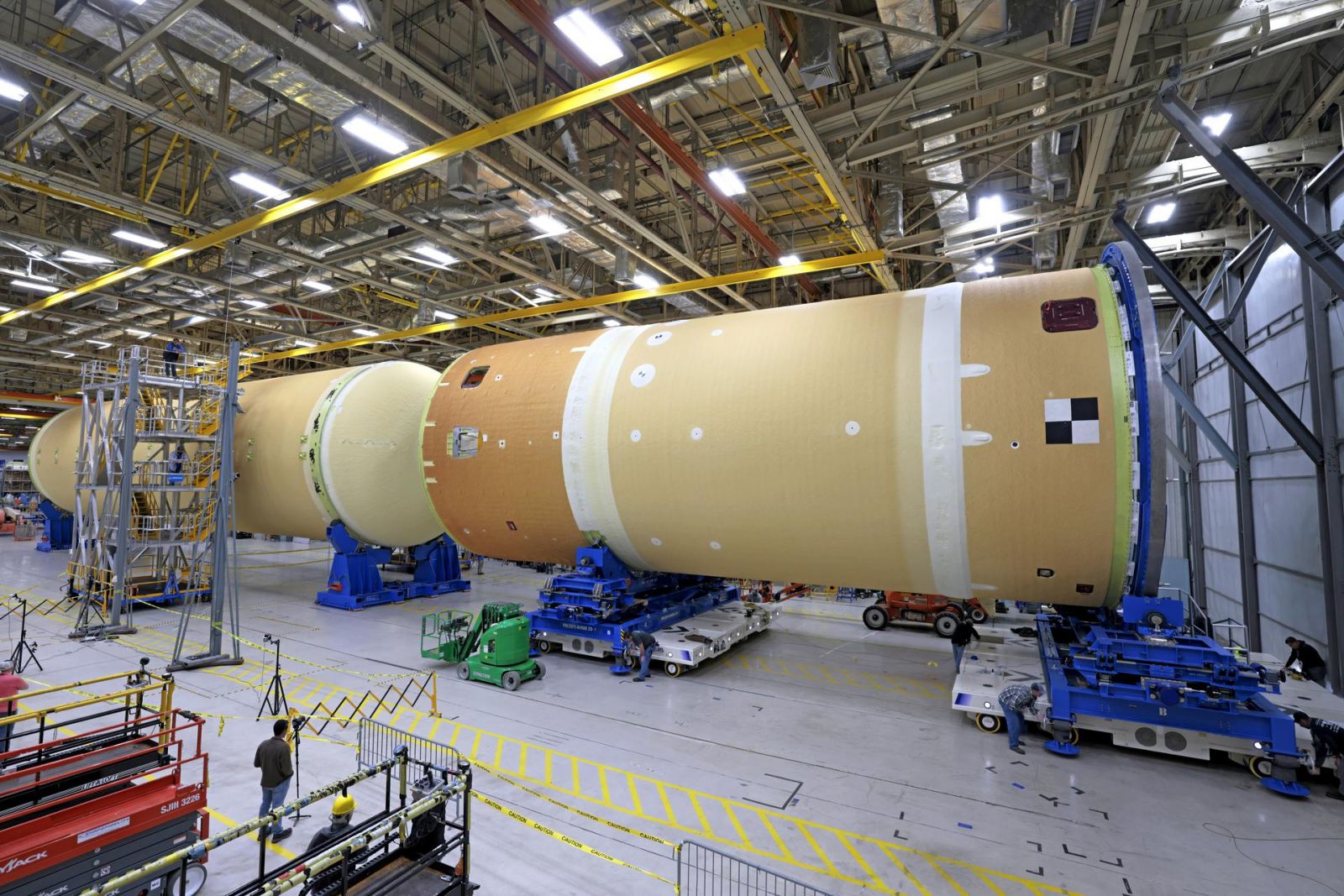 The forward join and liquid hydrogen tank for the second core stage of NASA’s SLS Moon rocket are positioned to be connected at NASA’s Michoud Assembly Facility in New Orleans. Credit: NASA

While the first Space Launch System rocket is being readied for its maiden flight, the core stage for a second SLS reached a new assembly milestone.

On March 18, NASA and Boeing engineers at the agency’s Michoud Assembly Facility in New Orleans completed the mating of four of five parts for the second SLS core stage. This will be used for the Artemis 2 mission, which is expected to send four astronauts around the Moon for the first time in more than 50 years. 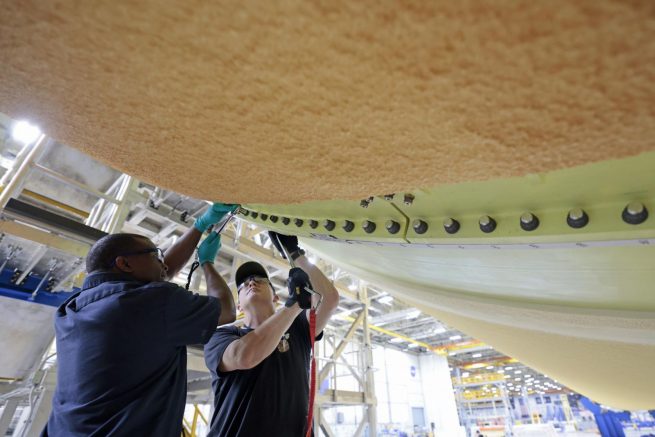 Engineers insert 360 bolts to connect the forward join with the hydrogen tank of the Artemis 2 SLS rocket. Credit: NASA

The elements mated were the 66-foot (20-meter) forward join — consisting of the forward skirt, liquid oxygen tank and intertank — and the massive 130-foot (40-meter) liquid hydrogen tank. According to NASA, a total of 360 bolts were required to connect these two pieces.

All that remains for the Artemis 2 SLS core stage is the engine section that will hold the vehicle’s four RS-25 engines.

Artemis 2 is currently slated to launch in May of 2024 from NASA’s Kennedy Space Center in Florida.

If all goes according to plan, the mission will send three NASA astronauts and a Canadian astronaut inside an Orion spacecraft on a lunar flyby trajectory, taking them as close as about 4,000 miles (6,400 kilometers) from the Moon’s surface.

This is expected to be the final proving mission for SLS and Orion before NASA attempts to land astronauts on the lunar surface with the Artemis 3 mission no earlier than 2025.

The first SLS Moon rocket for NASA’s Artemis program is currently standing tall on Launch Complex 39B at the Kennedy Space Center in Florida. Known as Artemis 1, the mission is to be an uncrewed flight test of the system. SLS will launch Orion to the Moon where it will enter a distant retrograde orbit for several weeks before returning to Earth, splashing down in the Pacific Ocean.

Artemis 1 is first expected to undergo a series of wet dress rehearsal tests where the rocket will be fully fueled as controllers practice countdown procedures that mimic what should happen on launch day.

If all proceeds according to plan, Artemis 1 is expected to launch from Kennedy Space Center no earlier than June of 2022. 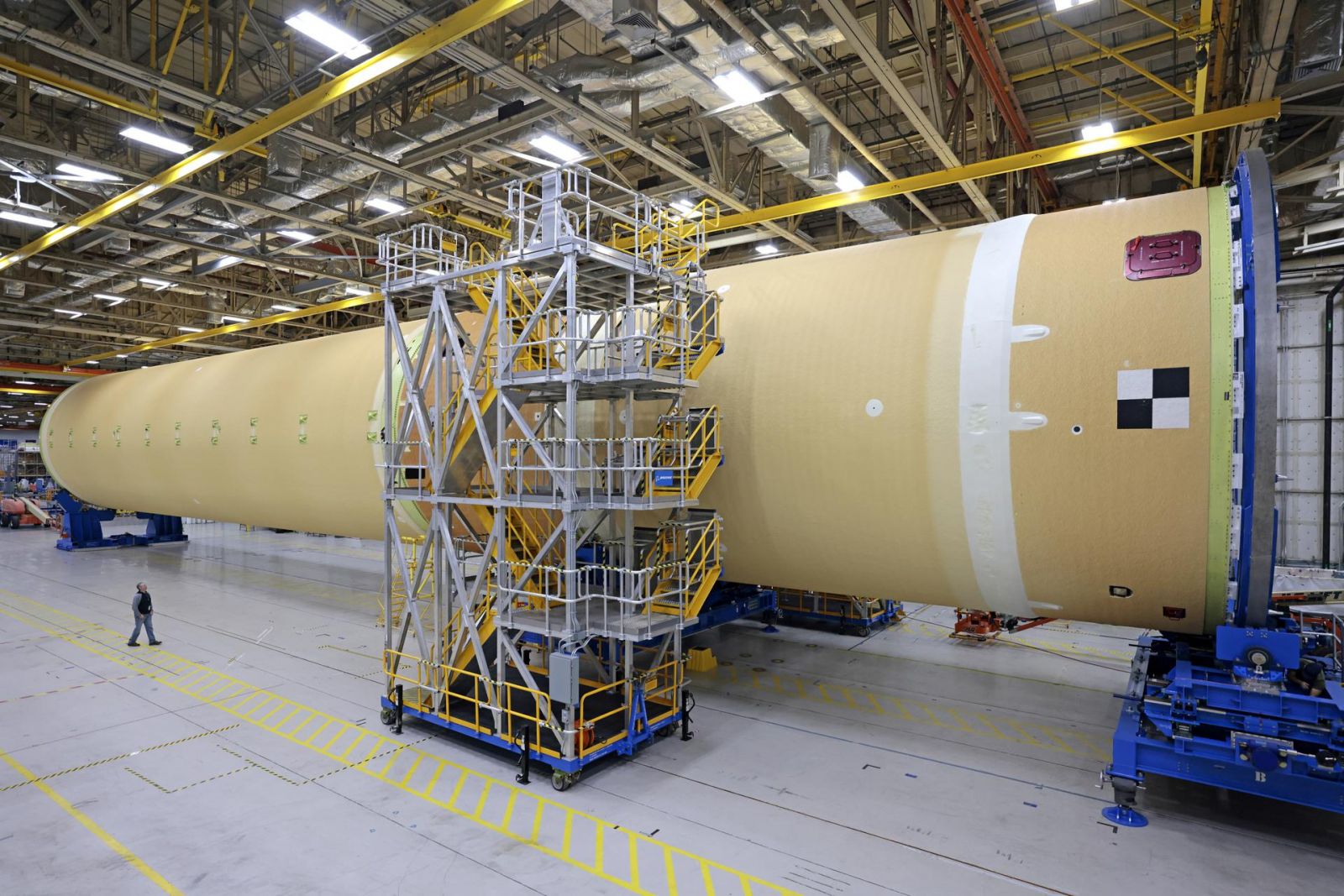 The Artemis 2 core stage after the forward join and hydrogen tank were connected. Credit: NASA