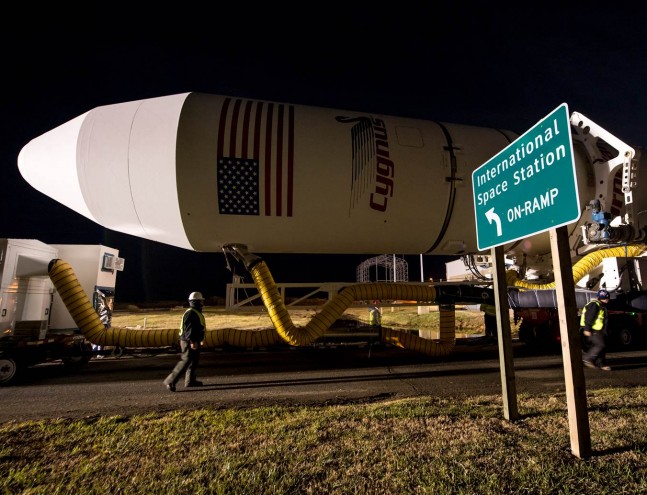 Orbital Sciences Corporation’s Antares rocket, carrying the commercial resupply services payload aboard their Cygnus spacecraft, has been delayed from its December 19 launch date to no earlier than January 13, 2014. The news comes less than 24 hours before the launch readiness review was due to take place and hours after the rocket was rolled out to the launch pad at the Mid-Atlantic Regional Spaceport (MARS). According to a report on SpacePolicyOnline.com, NASA has delayed the launch to go forward with a series of spacewalks (EVAs) to fix a coolant problem aboard the International Space Station (ISS). Delaying the launch until January will provide the astronauts aboard the space station with enough time to remedy the issue that start on December 11.

“Engineers began troubleshooting the coolant problem last week.  A flow control valve is not working properly and the ammonia used as coolant in that loop — one of two on the ISS — therefore is not being maintained at the proper temperature.  The affected loop was shut down and all critical ISS systems transferred to the functioning loop.  The ISS could remain in that situation for a while, but with reduced scientific experiments and less redundancy.   They were trying to find a workaround to avoid spacewalks, but decided today that they needed to move forward with fixing the problem,” said Space Policy Online.

The three spacewalks will begin this weekend on December 21, and then again on the 22, followed by one on Christmas Day. The first of the spacewalks will be to replace a pump module containing the suspect flow control valve and will be conducted by Expedition 38 astronauts Rick Mastracchio and Michael Hopkins.

The pump module will be replaced “with an existing spare that is stored on an external stowage platform. The pump is associated with one of the station’s two external cooling loops, which circulate ammonia outside the station to keep both internal and external equipment cool. Each of the three spacewalks will begin at 7:10 a.m. and is scheduled to last six and a half hours. NASA TV coverage will begin at 6:15 a.m,” stated a NASA release.

A news briefing from NASA’s Johnson Space Center in Houston is scheduled for 3pm EST on December 18 will air on NASA Television to preview the spacewalks.

Please check back with The Spaceflight Group for more information regarding the rescheduling of the Antares launch.