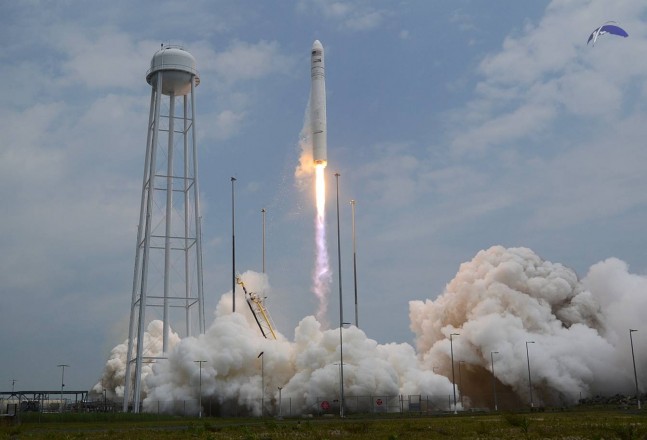 WALLOPS FLIGHT FACILITY, Va – After a series of delays over the past few months, an Orbital Sciences Corporation’s Antares rocket with the SS Janice Voss Cygnus spacecraft lifted off from the Mid-Atlantic Regional Spaceport (MARS) at Wallops Island, Virginia this afternoon at 12:52pm EDT (1652 GMT). Launching from Pad 0-A, the ORB-2 mission will deliver cargo and experiments to the astronauts aboard the International Space Station (ISS) under the Commercial Resupply Services (CRS) contract. The NASA launch commentator summed up today’s flight in a single word – Flawless.

The CRS contract between NASA and Orbital requires the Dulles, Virginia-based aerospace company to resupply the space station with much-needed cargo and crew supplies. Also participating on this contract is SpaceX who has been given the opportunity along with Orbital to develop a spacecraft capable of transporting payloads to (and in the case of SpaceX from) the ISS, taking turns with Orbital’s Cygnus capsule on CRS missions or, as Orbital has dubbed them, ORB. Today’s ORB-2 flight is the second in a total of 8 planned missions that Orbital is tasked with carrying out. It was preceded by ORB-1 as well as Cygnus’ first trip to the space station in September of 2013 under the Commercial Orbital Transportation System (COTS) program (also known as the ORB-D1 mission). SpaceX’s Falcon 9 rocket and Dragon spacecraft along with both of the craft Orbital fielded today – were developed under the COTS initiative.

For the ORB-2 mission, Orbital chose to honor former NASA astronaut Janice E. Voss, who passed away in February of 2012, by naming the spacecraft in her honor. She flew on five space shuttle missions between 1993 and 2000 before serving Orbital as a flight operations support.

Dedicating and naming the Cygnus spacecraft has become sort of a tradition with Orbital, whose last two cargo vessels were named for astronauts and Orbital employees that have since passed away. The ORB-1 Cygnus was named in honor of Gordon C. Fullerton and the ORB-D1 spacecraft was named after G. David Low. Both shuttle astronauts who had assisted Orbital in the company’s efforts, a fact touched on by one of the company’s representatives present at today’s launch.

“This particular spacecraft is named the SS Janice Voss. Janice is a friend of many of us, both at Orbital and the NASA community, particularly the NASA astronauts. Early in her career, after attending Purdue, she worked at Orbital Sciences for 3 or 4 years as an engineer, and then was selected as an astronaut and flew five missions for NASA,” said Orbital’s Executive Vice President and former NASA astronaut, Frank Culbertson. “Unfortunately, she passed away a couple of years ago and it was a great loss to the team and to the whole NASA community. We wanted to honor her and her family by naming this spacecraft after Janice. We think it’s a fitting tribute to a fine engineer, outstanding astronaut, and a great human being.” The items that Cygnus is delivering contain an array of supplies ranging from routine crew provisions and hardware to research investigations and science experiments. Of the 3,668 pounds (1,664 kg ) making up the payload, approximately 1,684 pounds (764 kg) of that is crew supplies, 783 pounds (355 kg) is vehicle hardware, 721 pounds (327 kg) is science investigations, 18 pounds (8 kg) is computer resources, and 87 pounds (39 kg) is Extra Vehicular Activity (EVA) equipment.

Some of the research highlights of the ORB-2 mission include Planet Labs’ Flock 1b — which is a series of 28 tiny CubeSats (the ORB-1 mission this past January also carried some of these satellites to orbit), the TechEdSat-4 satellite, and several student experiments from across the country under the Student Spaceflight Experiment Program (SSEP).

NASA provided the following descriptions of these experiments:

This collective group of small, relatively inexpensive, nanosatellites, known as Flock 1, will be joined by 28 additional Dove satellites, Flock 1b, on the Orbital-2 mission. They will deploy using the Nano-Racks Smallsat Deployment Program to launch from the space station’s Japanese Experiment Module (JEM) airlock. Once deployed, these two flocks will work in unison and capture imagery of the entire planet on a more frequent basis. These images can be used to help identify and track natural disasters and responses to them, as well as improve environmental and agricultural monitoring and management. The satellite-related investigation TechEdSat-4 is part of a larger ongoing study, the Small Payload Quick Return system, which provides a means of returning small payloads in a temperature and pressure controlled environment from the space station. TechEdSat-4 will deploy using the JEM Small Satellite Orbital Deployer. Its primary objectives are to further develop a tension-based drag device, or “Exo-Brake,” and demonstrate frequent uplink/downlink control capabilities.

This STEM education initiative provides numerous students across the U.S. the ability to propose and design real experiments to fly on the space station. This investigation consists of 15 independent studies that were selected out of 1,344 student team proposals. These individual studies range from food growth and consumption, to determining the effect of microgravity on oxidation, to even the production of penicillin on the space station.

Originally planned for May 6, the launch of ORB-2 was delayed several times due to issues outside of the launch team’s control. The first delay was due to a slip back in March of this year with SpaceX’s CRS-3 mission at Cape Canaveral Air Force Station due to damage with the ground tracking radar station which monitors rockets as they head to orbit. Antares was then delayed several times in May and June due to an engine failure. The engine, an Aerojet Rocketdyne AJ-26, was undergoing testing at NASA’s Stennis Space Center in Mississippi for use on a future mission when it failed. Aerojet Rocketdyne and the Wallops Flight Facility team thoroughly investigated the issue before clearing the rocket and its components for launch in mid-June. Orbital is already preparing the next Antares to launch to the space station. That mission is currently slated to begin in October of this year. Photo Credit: Elliot Severn / SpaceFlight Insider

The most recent postponements that happened this week stem from severe weather in the Wallops Island area. On the night of July 8, the rollout of Antares was cancelled due to severe thunderstorms that were moving through the region. Despite making it to Launch Pad 0A on the morning of July 10, storms again thwarted the targeted launch attempt for Saturday, July 12.

After the weather cleared along the Virginia Coast later in the week, the 131-foot-tall (40 meters) Antares was given the green light for launch to the orbiting laboratory. This was the fourth flight of the Antares rocket in the past 15 months. The booster delivered some 816,000 pounds (3,630 kN) of thrust provided by its twin rocket-propellant (RP) and liquid oxygen-fueled AJ-26 engines. These engines are a modified version of the Russian NK-33. The rocket’s second stage is powered by an ATK CASTOR 30B solid rocket motor.

“ATK’s CASTOR 30B motor provided the additional thrust needed to deliver more cargo to the ISS crew,” said Scott Lehr, vice president and general manager of ATK Aerospace Group’s Defense and Commercial division. “This advanced solid rocket motor is a great example of how we can provide innovation to our customers to help them meet their emerging needs.” After an approximately 10 minute launch sequence from liftoff to the separation of Cygnus from the 13 foot (3.9 meter) tall payload fairing, the spacecraft was successfully inserted into low-Earth-orbit with solar arrays deployed. Capable of delivering approximately 3,409 pounds (2,000 kg) of pressurized cargo to the ISS, the Cygnus spacecraft is about the size of a small bus and shaped like a giant soda can, coming in at about 17 feet (5 meters) long and 10 feet (3 meters) wide.

If everything goes according to plan, after 3 days in orbit, Cygnus will then reach the International Space Station on Wednesday, July 16 at approximately 6:37 a.m. EDT (1037 GMT).

As described in an update provided by Orbital Sciences Corporation:

The spacecraft will then conduct a series of thruster burns to raise its orbit to bring it within 4 km of the ISS prior to receiving authorization to autonomously rendezvous with the station. When the vehicle approaches to within 12 meters, the astronauts will use the station’s robotic arm to grapple Cygnus and berth it to the Harmony node of the station. NASA stated that Expedition 40 astronaut Commander Steve Swanson will be conducting the grappling procedure taking hold of the spacecraft and attaching it to the station. It will then be bolted into place for the duration of its 30 to 40 day stay and subsequently have the supplies on board unloaded and it will then be reloaded with disposable materials. After this time, the SS Janice Voss will then depart the ISS to reenter the atmosphere, burning up on reentry.

With the completion of ORB-2, the Antares launch teams at NASA and Orbital will begin making preparations for ORB-3, which is slated to launch on October 3, 2014. It will be the last flight of the standard-sized Cygnus spacecraft and the first of the upgraded Antares 130 launch vehicle. This will also be the first of the Antares launches to utilize ATK’s enhanced upper stage motor, the CASTOR 30XL.

“This mission once again signifies the strength of this commercial partnership which supports NASA, our astronauts, the International Space Station and the nation,” said Aerojet Rocketdyne Vice President of Space Launch Systems, Steve Bouley. “This team has collaborated very well and we look forward to many more missions together.”

Please check back with SpaceFlight Insider for updates regarding the berthing of Cygnus to the space station and the upcoming ORB-3 launch.

Launch was right on time with no delays. Picture perfect and no glitches. I was struck be one interesting point. Coverage consisted of actual spacecraft footage only until it was lost in first low cloud. On a beautiful clear day they had no long rang camera coverage and no onboard camera downlink. Not even for payload sep or shroud ejection. I was quite surprised at this. It has been only with Orbital’s last two launches that I have been left with the same simulations of vehicle progress that I had during the Apollo years. I really can’t believe that with rules put in place for range cameras and filming after the Columbia accident that Wallops doesn’t have similar filming resources. The alternate possibility is that NASA and Orbital just don’t bother to display these portions of the feed. Without more engaging visual information I could just as easily read about it later or watch a 25 sec YouTube video. I feel Wallops was originally chosen because of its proximity to Orbital’s headquarters and to be in viewing distance of the capital to engage Congress with visual proof of worth. Does that not make sense for the public supporters also?