Antares and Cygnus on schedule for Wednesday launch 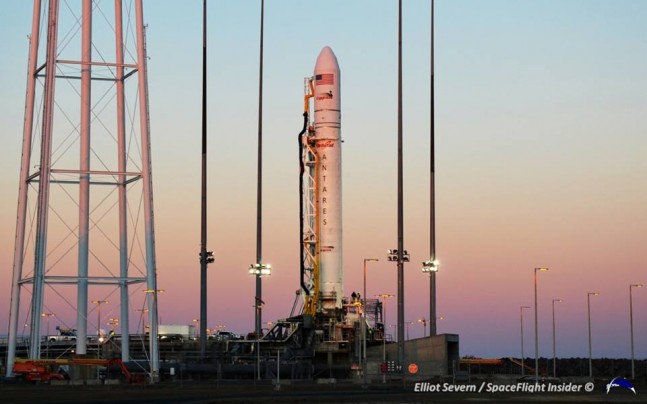 WALLOPS FLIGHT FACILITY, Va — Orbital Science’s second mission to resupply the International Space Station (ISS) is scheduled to launch Wednesday, January 8 at 1:32 p.m. EST (18:32 GMT), delivering 3,230 lbs of food, clothing, spare parts and scientific experiments. Launching from Pad 0A their facility at the Mid-Atlantic Regional Spaceport (MARS) on Wallops Island Virginia, the Antares rocket will boost the Cygnus robotic spacecraft into orbit for a rendezvous with the ISS on January 12.

The Cygnus spacecraft is named C. Gordon Fullerton as a tribute to the three-time space shuttle astronaut. In addition to his shuttle experience Fullerton was a test pilot at the Dryden Flight Research Center and piloted the first launch of the Pegasus air launch rocket. Launch of Cygnus was originally scheduled for December of last year and was delayed when one of the two cooling loops on the ISS failed. With limited cooling capacity, many system were shut down making it impossible to support the resupply mission. Two urgent spacewalks removed and replaced the pump, bring the station back up to full operation.

Developed for NASA’s Commercial Resupply Services(CRS), Cygnus is capable of delivering more than 4,400 pounds of cargo to the ISS. After separating from the second stage of the Antares rocket, the spacecraft will begin a series of maneuvers that will slowly raise its orbit, ultimately approaching the station from below. Crews on the ground and on the station will carefully monitor the approach, watching for any sign of trouble that will force them to abandon the rendezvous attempt. Approaching to about 36 feet beneath the station, astronaut Mike Hopkins will extend the station’s robotic arm and grapple Cygnus. Once attached to the end of the robotic arm, Hopkins, with the help of fellow crewmember Koichi Wakata, will guide the cargo vehicle to its berthing location on the Earth-facing side of the Harmony node.

Continuing the role of the International Space Station as a unique laboratory in space, about one fourth of the cargo is dedicated to scientific experiments. Several life science experiments are being delivered, ranging from studies on the effectiveness of antibiotics in microgravity to a commercially sponsored study on foams and gel-type liquids. Twenty-three experiments were submitted from 5th to 12th grade students, and include studies of DNA, enzyme activity and oil bubble formation. Not limited to exploring cells and molecules, astronauts will videotape the activity inside an ant farm to learn how a colony interacts socially and forages for food.

Life onboard the ISS generates a large amount of trash, ranging from dirty clothing, human and food waste and unneeded equipment. After Cygnus is unloaded, the crew will fill the spacecraft with up to 2,800 pounds of unnecessary items. After undocking from the ISS, Cygnus will fire its engine to slow the spacecraft and reenter the atmosphere. Weather along the east coast of the United States has been brutal, with record low temperatures and snow. Forecasts for Wednesday’s launch are significantly better, with temperatures in the low 30’s, generally clear skies and light winds. At launch time, there is only a 5 percent chance of weather preventing a launch. Although weather is expected to be good, other problems may force a delay until Thursday, January 9. If the launch is delayed more than three days, the science payload will have to be replaced, causing a two week delay as the rocket is defueled, rolled back to the hangar and Cygnus opened to replace its cargo.

Although launching during the day, Antares will be visible to people along the mid-Atlantic coast. Flying a path to the southeast, the rocket will be visible as far north as Philadelphia down to the outer banks of North Carolina.

Tomorrow’s launch is the first of three planned missions for Orbital in 2014. Additional missions are scheduled for May and October, and will deliver a total of 12,100 pounds of cargo to the ISS. Orbital Sciences Corporation has ramped up processing of the Antares rocket out at Wallops. This has brought the small space center into sharper focus. Photo Credit: Elliot Severn / SpaceFlight Insider