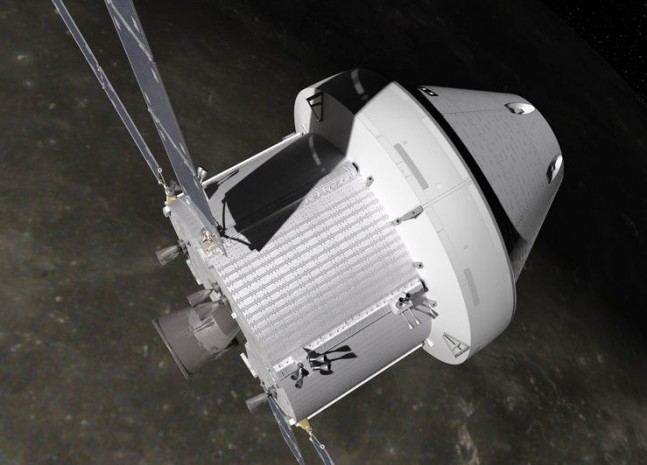 On Nov. 17, Airbus Defence and Space signed a contract with the European Space Agency (ESA ) for the development and construction of the service module for NASA’s Orion Multi-Purpose Crew Vehicle (MPCV ). The contract was signed in Berlin, Germany and is worth about 390 million euros.

Orion, under development by NASA, is the space capsule designed to carry astronauts beyond low-Earth orbit aboard NASA’s Space Launch System (SLS). The vehicle is comprised of the service module, the crew module and the launch abort system, with an aim to carry humans to the Moon, to asteroids, and to Mars. The service module’s purpose is to propel and power the spacecraft and to provide thermal control, water and air for the crew. It can be disposed after each mission, and is designed to be released from the crew module just before the capsule returns to Earth.

NASA and ESA had agreed in December 2012 that a European service module would power the Orion spacecraft, and that it would be based on the design and experience of the Automated Transfer Vehicle (ATV) that Airbus developed and built, on ESA’s behalf. The ATV was designed as an expendable spacecraft to resupply the International Space Station (ISS) and, as needed, boost the station’s orbit as its orbit decays. The fifth and final ATV launch occurred in July of this year.

Though the European space program was significant in the development of Spacelab, a laboratory that was used on many Space Shuttle missions, this is the first time NASA has allowed a European module to power a spacecraft crewed by American astronauts. According to Airbus, this is the first time Europe has been involved in providing system-critical elements for an American space project at all.

“Let me be very clear – if Europe had not done ATV, the US would not have invited Europe to do the service module for them,” said Bart Reijnen, the head of orbital systems and space exploration at Airbus Defence and Space. “If we had not done ATV, we would have started with a much lower technology readiness level, which would have meant spending more money and taking a longer schedule.” Orion, with its ATV-derived Service Module can be seen connected to its booster’s upper stage in this artist’s depiction. Image Credit: NASA

François Auque, Airbus’ Head of Space Systems, stated, “This follow-on contract is a mark of confidence in our expertise as well as in our ability to deliver reliable state-of-the-art space systems on time and within budget. Thanks to this program and the continuous investments we make, we are able to maintain our technological lead. In the wake of the ATV’s outstanding five flawless missions to the ISS, this program is yet another example of the important role that Europe plays globally in the field of human space flight.” NASA is currently working to have its new heavy-lift booster, the Space Launch System ferry Orion aloft as early as 2018. Image Credit: NASA

ESA approved the system designs for the service module in May of 2014, which began the detailed definition phase. This phase is scheduled to be completed a year from now, in November 2015, when the detailed design is approved by ESA. After that point, the qualification and production phases will occur.

The price tag on the new spacecraft will be essentially zero, as a barter agreement has been arranged. In exchange for the European-built service module, NASA will cover the costs Europe will incur at the ISS between 2018 and 2020. This type of arrangement is commonplace, and as the station should be operational into the decade, we may see more arrangements for future service modules.

Exploration Mission 1, currently planned for 2017/2018, will be the first Orion mission with European involvement. The goal is an unmanned flight to the Lagrangian points of the Moon and a successful return to Earth, with an aim of demonstrating the spacecraft’s abilities before adding any crew as well as qualifying for NASA’s SLS rocket. Exploration Mission 2 is scheduled for no earlier than 2020, and is planned to be the first crewed mission of Orion.

“It is of course my wish to have a European astronaut – a man or a woman – onboard the Orion capsule sometime in the next decade,” said Thomas Reiter, ESA’s human spaceflight director. “I don’t think it is too far-fetched to believe that with this path we have now opened, we will get flight opportunities.”

Next week, on Thursday Dec. 4, we will see a test version of the service module, along with the crew module lift off from Cape Canaveral as part of a test flight. Exploration Flight Test-1 (EFT-1), will lift off from Space Launch Complex 37 (SLC 37) atop a United Launch Alliance (ULA) Delta IV Heavy at 7:05 a.m. EST (1205 GMT). The test flight is expected to last just over four hours and will test key systems on the vehicle, including the launch abort system (LAS), heat shield, and parachutes. The world must stand together in the exploration of space, near and far. The cost is to great for any one country or organization to take on. Putting men on the moon was cheap compared to what our future conquests will be. Sometime in the future we will leave our solar system because we believe we are not the only intelligent life form in our Galaxy. There may be hundreds, thousands, millions and possibly even billions of life forms in our Milky Way galaxy that we can communicate with and that is only in our galaxy.
Adventually we will break loose of our galaxy and communicate with other intelligent life forms

This “world must stand together” is a bunch of liberal hype. If this is our rocket we (Americans) should be building all the pieces and parts. It’s just plain wrong to be using our tax dollars to keep foreigners employed when we need jobs here.