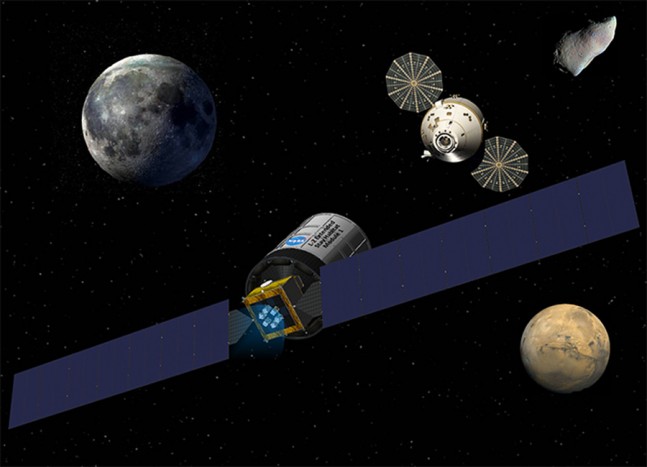 Sacramento, California-based Aerojet Rocketdyne announced on Thursday, June 9, that they have successfully built and tested a prototype system that improves the way that power is delivered from solar arrays to the electric thrusters on Solar Electric Propulsion (SEP) spacecraft. The prototype system was tested in a simulated mission environment to demonstrate that it could achieve greater system efficiency than the Power Management and Distribution (PMAD) systems currently used on satellites.

“For high-power SEP modules, such as those that NASA envisions for transporting cargo to Mars, it will be critical to efficiently process and deliver the power from the Advanced Solar Arrays to the High Power Electric Propulsion thrusters on spacecraft,” said Julie Van Kleeck, vice president of Advanced Space and Launch Programs at Aerojet Rocketdyne. “This is a critical step toward achieving that goal as we prepare to journey further into space.”

“Our team has constructed an approach that leverages the benefits of SEP to improve affordability and reduce [the] risk for NASA Human Exploration,” said Van Kleeck. “Using [an] SEP tug for cargo delivery, combined with NASA’s Space Launch System and the Orion crew module, provides an affordable path for deep space exploration.”

It is amazing how far ion propulsion systems have come over the last half a century. We are rapidly approaching the 51st anniversary of the first test of ion engines in space as part of the SERT I flight:

Although decades of additional work was required to improve the performance and reliability of the technology, by the turn of the century it was being routinely used in comsats and now is helping us explore the largest asteroids as part of NASA’s Dawn mission.