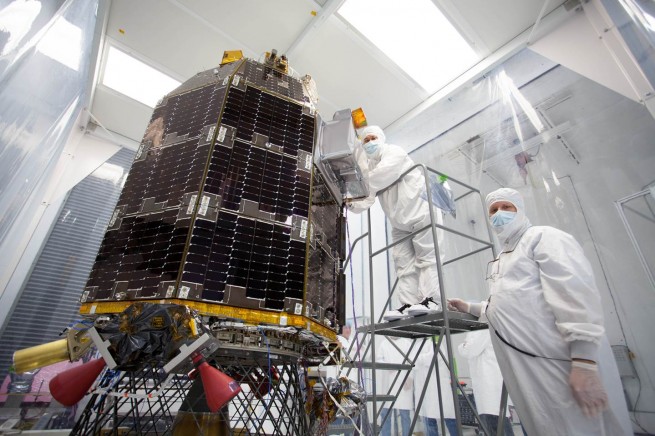 NASA's LADEE mission is ready to review the discoveries made by the Apollo astronauts decades ago. Photo Credit: NASA

All systems are go for NASA’s newest lunar orbiter to conduct its primary science mission. LADEE, the “Lunar Atmosphere and Dust Environment Explorer”, was launched Sept. 6, 2013 to help find the answer to a puzzle which was first put forward by astronaut Eugene “Gene” Cernan back in 1972 on humanity’s last crewed mission to the lunar surface – Apollo 17.

Cernan peered out to see a glow creeping along the Moon’s horizon moments before the lunar sunrise. As the sun crested the Moon’s edge, rays of light began to spool outwards like beams from a flashlight. No one knew what it was that he and other Apollo astronauts were seeing.

“We’re all taught from an early age that the Moon has no atmosphere, but in fact that’s not true, it has a very thin, tenuous atmosphere that’s composed of a rather exotic species. It’s very unlike our own atmosphere…We know for a fact that it has sodium, for instance, as a gas, and potassium as a gas, and argon and helium. But we don’t know what else is there. We suspect there are plenty of other culprits in there. But it’s very, very, very thin, and it’s insubstantial enough that it can’t loft dust, and that’s what made Gene Cernan’s observations of these rays, these sunset rays or sunrise rays, so mysterious.” Elphic suggests that some other mechanism, perhaps electric forces, is lofting dust particles into the lunar atmosphere to produce the shimmer that greeted Apollo 17. The going hypothesis for the last forty years has been that static electricity builds up on the Moon and produces enough magnetism to lift small pieces of dirt. This works through a split lunar charge induced by the sun. The surface of the Moon exposed to the heat of the Sun is positively charged, while the dark side of the Moon is negatively charged. The difference, scientists suspect, is enough to answer Cernan’s puzzle.

Until LADEE, however, there has been no way to confirm that hypothesis. The satellite intends to put this issue to rest by analyzing it from two ends. The payloads required to do this have just recently completed their commissioning phases and are gearing up to perform mission tasks.

The Lunar Dust Experiment (LDEX) will gather particles on its way through the Moon’s atmosphere, both examining the prevalence of vaulted dust and analyzing its size. A Neutral Mass Spectrometer (NMS) will help evaluate Elphic’s “culprits” still unknown in the lunar atmosphere.

Concurrently the Ultraviolet and Visible Light Spectrometer (UVS) will be looking at the haze Cernan described, attempting to record and analyze the properties of light found across the lunar atmosphere.

Finally, LADEE is also attempting to innovate how NASA communicates from deep space. The craft’s Lunar Laser Communication Demonstration payload (LLCD) is the first ever to use broadband to communicate instead of radio. NASA announced that the LLCD’s pulsed laser signals sent information from the moon to Earth at a record-breaking download rate of 622 megabits per second. The successful demonstration may prove instrumental in increasing the volume of information NASA can exchange with instruments beyond low-Earth-orbit.

LADEE’s science mission will last 100-days, a short time to wait to answer a forty-year-old mystery.