The Time History of Events and Macroscale Interactions during Substorms (THEMIS) mission was originally a fleet of NASA satellites (five in total, officially known as THEMIS A through THEMIS E). Each Themis spacecraft has a mass of approximately 126 kg, including 49 kg of fuel. Themis was launched atop a United Launch Alliance Delta II rocket from Cape Canaveral Air Force Station’s Space Launch Complex 17 in Florida. The mission was flown to study energy releases from Earth's magnetosphere. The name of the mission is an acronym alluding to the Titan, Themis. Three of the satellites remain in the magnetosphere, with two remaining two placed into orbit near the Moon. The lunar orbiting spacecraft have been renamed ARTEMIS for Acceleration, Reconnection, Turbulence and Electrodynamics of the Moon’s Interaction with the Sun. All of the spacecraft carry the same science instruments on board. These include a fluxgate magnetometer (FGM), an electrostatic analyzer (ESA), a solid state telescope (SST), a search-coil magnetometer (SCM) and an electric field instrument (EFI). Photos courtesy: Carleton Bailie 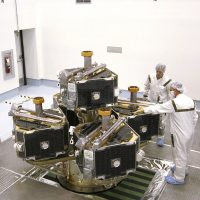 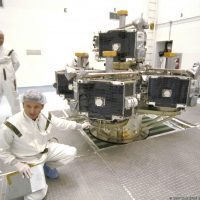 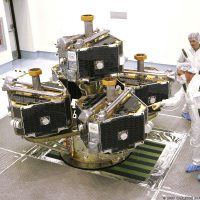