The sixth Ariane 5 mission, designated VA-227/581 by Arianespace, launched two communication satellites, ARABSAT-6B (BADR-7) for Arabsat and GSAT-15 for the Indian Space Research Organization (ISRO). ARABSAT 6B (BADR 7) was the ninth satellite orbited by Arianespace for ARABSAT, the leading regional coomunications satellite operator in the Middle East and Africa. ARABSAT 6B (BADR 7), constructed by Airbus Defence and Space and Thales Alenia Space (TAS), and is the first of the sixth generation of satellites in the Arabsat fleet and was sent aloft to provide broadcast, broadband, and telecommunications services across the Middle East, Africa, and Central Asia. GSAT-15 is the 18th satellite built by the Indian SPace Research Space Organisation (ISRO) and the 19th payload Arianespace has launched for ISRO. GSAT 15 will provide telecommunications services, as well as dedicated navigation-aid and emergency services for India. ARABSAT-6B (BADR-7) and GSAT-15 were launched aboard an Ariane 5 ECA on November 10, 2015 from Kourou Space Centre located in French Guiana. Photos courtesy of: Jeremy Beck 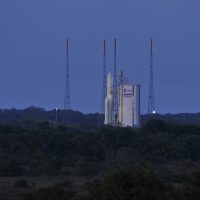 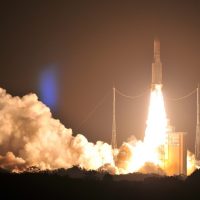 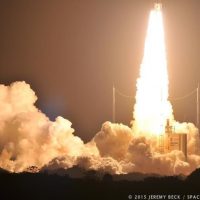 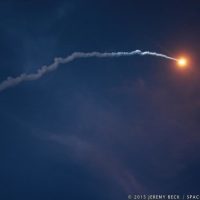 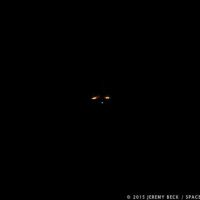