Cygnus CRS Orb-1, also known as Orbital-1, was the second flight of the Orbital Sciences Corporation (now Orbital ATK) Cygnus automated resupply spacecraft, as well as the second flight to the International Space Station and the third launch of the company's Antares rocket. Lifting off from the Mid-Atlantic Regional Spaceport’s (MARS) Pad-0A at NASA’s Wallops Flight Facility located in Virginia. Orb-1 lifted off at 1:07 p.m. EST (18:07 GMT) on January 9, 2014 on a mission that lasted more than 41 days. The spacecraft was named the C. Gordon Fullerton in honor of the NASA astronaut who died on August 21, 2013. The mission successfully delivered some 2,780 lbs (1,261 kilograms) worth of cargo, crew supplies and experiments to the International Space Station. Photos courtesy: Mark Usciak 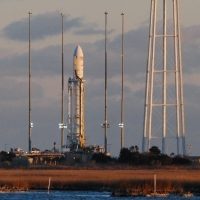