Galileo FOC (Full Operational Capability) is a joint venture between the European Community and the European Space Agency to provide a European global navigation system. It will, when completed, be comprised of 30 satellites orbiting in three planes at a 56° inclination and in an operational circular medium-Earth orbit (MEO) at an altitude of 14,430 miles (23,222 kilometers), inclined 57.57 degrees. The first successful launch of the system (FOC 3 and 4) took place in March of 2015. On November 17, 2016, Arianespace launched four Galileo satellites—FM7 (Antonianna), FM12 (Lisa), FM13 (Kimberley), and FM14 (Tijmen), each named after a child that had won the European Commission’s Galileo drawing competition—aboard an Ariane 5 from Kourou, French Guiana. Photos courtesy: Jeremy Beck 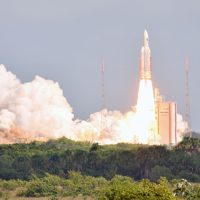