A historic piece of NASA space hardware officially came home on May 6, 2016 when NASA's Glenn Research Center held a special ceremony to dedicate their newly completed Shuttle/Centaur G-Prime Upper Stage Rocket display. The 6,600 lbs (2,994 kg) Centaur G-Prime test article recently arrived at Glenn from the U.S. Space and Rocket Center located in Huntsville, Alabama. The booster had been on display outside the Huntsville Rocket Center for several years. The Center wanted to move it in order to make room for a planned redesign of their outdoor display, so the historic artifact was transferred to NASA Glenn, which had managed the Shuttle-Centaur program in the 1980s. Nearly forty retirees who had worked at Glenn on the Centaur program were also present for the dedication and ribbon cutting. Their pride in the project was evident as they posed for group pictures and closely examined the newly arrived booster, a product of their handiwork from some 30 years ago. 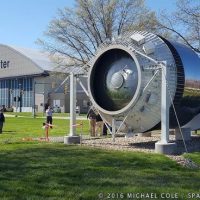 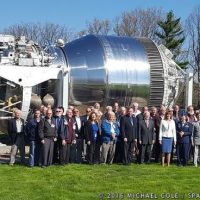 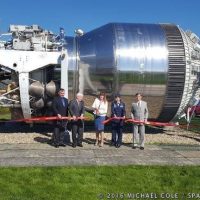