Opinion: The War of the Worlds – To the Moon or Mars? 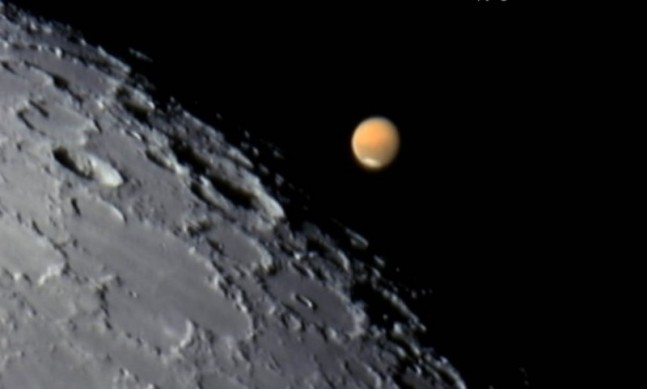 The space community is deeply divided. One group believes we need to focus our manned space efforts on returning to the Moon. Another believes we should bypass the Moon and go straight to Mars. The two groups see one another as enemies, but there is no reason for this to be so. The pro-space community is small and has minimal impact in Washington. Since we all want the same thing—permanent human presence in space (and, in fact, on Mars)—there is certainly enough common ground for us to unite.

NASA is the only government organization that’s on a no-growth budget. All other government organizations receive automatic budget increases each year; the annual budget allocated to most government organizations is not the money that it receives, but how much more it receives compared to the previous year. NASA alone receives the same allotment every year and certainly when Congress decides to cut budgets, NASA is first on its chopping block. Why is that? The reason is simple: it’s highly visible and has only a small group of supporters. The problem of national lack of interest in space is an old one and is a discussion for another time. The fact is, manned spaceflight is kept alive by a group too large to ignore entirely, but too small to make a significant impact.

Since no private company has yet launched humans into space, NASA is still the leader in American spaceflight (although some might lament or even deny the fact), and therefore the future of American manned space flight depends on the support of the American people. To draw a sharp line between the Moon people and the Mars people is to create a false divide. Mars is and always has been the ultimate goal. If we are to have a permanent future in space, the most likely long-term manifestation will be in the colonization of Mars. No one wants to go to the Moon and just stop. The Apollo lunar modules carried astronauts, experiments, and tools, and some even carried the battery-powered rover. Future lunar modules could carry inflatable habs and 3-D printers to construct a low-cost Moon base. Photo Credit: NASA

Yet that is exactly what the Mars advocates fear. Returning to the Moon, they say, would merely be a repeat of Apollo. The enormous expenditure in returning to the Moon would be better spent on the ultimate objective, Mars. Given that the space shuttle kept us trapped in low Earth orbit for thirty years, they certainly have a basis for their worry. We were supposed to be on Mars by 1980; now we can’t even launch humans into space. If we’re going to mount an ambitious and hugely expensive space program, let’s bypass the place we’ve been and reach for Mars.

But what happens if we do that? Suppose we do mount an Apollo-style mass effort to send people to Mars. What then? Mars One aside, would such a mission really lead to colonization? It’s doubtful. There are some excellent plans to colonize Mars in a short time—Robert Zubrin’s Mars Direct is probably the most famous—but there are also excellent reasons to suppose such a program would be unsustainable.

NASA has continually resisted Mars Direct, but since it has become the model for most serious Mars plans, we’ll use that as our template here. An in-depth Mars colonization program would involve many launches over a long period of time, each of which would unavoidably cost at least as much as a space shuttle launch. A single Mars Direct flight, for example, would require the launch of the unmanned Earth Return Vehicle, followed by the launch a year later of the manned Mars Habitat Unit. Mars Semi-Direct would involve three launches. And the progress of Mars colonization would require a long-term commitment to continual manned Mars missions over years, decades, and ultimately centuries.

Politicians don’t have that kind of attention span. Even if NASA were to utilize existing hardware, such as the Space Launch System (SLS) or SpaceX’s Dragon capsule, new hardware will have to be designed and built to sustain the crew during the long and hazardous journey. Even if the initial expedition is a success, history indicates that public interest and government funding may not provide any follow-up missions. No sooner had Neil Armstrong and Buzz Aldrin landed on the Moon in July of 1969 than public attention wandered elsewhere and funding for the Apollo program evaporated. But that’s not a reason not to do it.

Something akin to Mars Direct can be done, but it ignores the potential of the Moon. Politicians are unlikely to give the go-ahead for something as ambitious and long-term as Mars Direct, nor something as grandiose as a sprawling city on the Moon (as we saw when Newt Gingrich suggested just such a thing. Therefore, the logical first step is a low-cost, incremental, modular Moon base, one which can be expanded with follow-up missions. Existing technologies like 3-D printing can assist in lowering the price tag.

As soon as the world sees a return in terms of jobs, new technologies, access to new materials, and even lunar tourism, public interest will increase, and with it the political will to expand the base. Once we have a base on the Moon, a place where astronauts could practice living and working in an alien environment for a long time, where materials could be mined and refined, where new rockets could be built and launched, spacecraft could far more easily be launched from the Moon toward Mars than from Earth. And the existence of the Moon base would have already demonstrated our proficiency in deep space flight and provided the opportunity for spacecraft and astronauts alike to work out the problems ahead of time. Mars Direct, Dr. Robert Zubrin’s plan to colonize Mars, would begin by sending an unmanned Earth Return Vehicle which would fuel itself from the Martian atmosphere, followed a year later by a crewed Hab which would be the first component of a Mars base. Photo Credit: Orange Dot Productions

The concern that a Moon base would become the be-all end-all of the manned space program is a valid one, but so is the argument that a permanent human presence on the Moon would make Mars more accessible. Once we have the capability of launching spacecraft from the Moon, manned missions to Mars and the other planets may well be inevitable. Keeping in mind that we’re all in agreement that Mars is the ultimate goal, it would be inexcusable not to use the Moon’s location at the top of the gravity well not to launch low-cost Mars missions as soon as we’re able. Yet even if we do stall on the Moon, at least we would have that vital foothold on another world.

When the Constellation program was canceled, we lost the Moon and Mars. President Obama made clear that we are not returning to the Moon, nor is there a clear path to Mars; there is only the vague statement that it would be nice to orbit Mars in the President’s lifetime, and now the Congressional order that NASA investigate using SLS for a crewed Mars flyby by 2021. Aside from the Mars flyby, NASA is planning the Asteroid Retrieval Mission (ARM). In other words, there’s a whole lot of nothing going on. We would be well served if advocates of lunar and Mars colonization unite. Accepting that permanent human presence on Mars is the ultimate goal, we can argue later over how to get there. Right now Washington must be pressured to provide a solid mission for our space program with a long-term plan, destination, vehicles, timeline, and budget, and Mars people must accept it if we go to the Moon first, and Moon people must accept it if we go to Mars first. The point is to get there.

The views expressed in this commentary are solely those of the author and do not, necessarily reflect those of The SpaceFlight Group

Not compelled by ARM eh? I have my doubts as well, but after watching a few of the more recent press conferences on the subject I think it really does have some real applications towards the goals of getting us moving in the direction of Mars by helping us vet deep space propulsion technologies needed for cargo transfer to a Martian base, not to mention a low-hanging fruit to get to via the new SLS hardware. Then there’s the big implications such technology could have in terms of in-space resource utilization, which in turn would help us get our foot in the door of building infrastructure in space, a necessary component if we want to move the mass necessary for human colonization to the red planet in a sustainable manner. Now if only NASA would be clear about what they think the whole project is going to cost….

That’s not to say the Moon isn’t a place we should go, but it seems to me NASA’s current thinking is that if partner nations or private industry (like Bigelow or Golden Spike) want to go they’ll hitch a ride, they just won’t focus all their energies on a dedicated program. Looking at budget forecasts as they are, I tend to agree that if we do see a rush to the moon, it would probably be led by industry folks with a business incentive, assuming we can sort out the politics of such ventures.

Where do you get the notion that every government agency gets automatic budget increases except NASA?

The main reason why NASA and some Mars advocates don’t want to return to the Moon is because of the idea it would cost too much and take too long. Actually it wouldn’t:

Towards a low cost lander for the Moon – and Mars.
http://exoscientist.blogspot.com/2014/05/towards-low-cost-lander-for-moon-and.html

the War of the Worlds?, always the same topic, war, war and war. War is only a invention of humans, pontifices, monarchs and politicians for live from the People´s Work

The article isn’t about war, it’s just a play on words. If you’re too stupid to know the difference please stay off the internet!